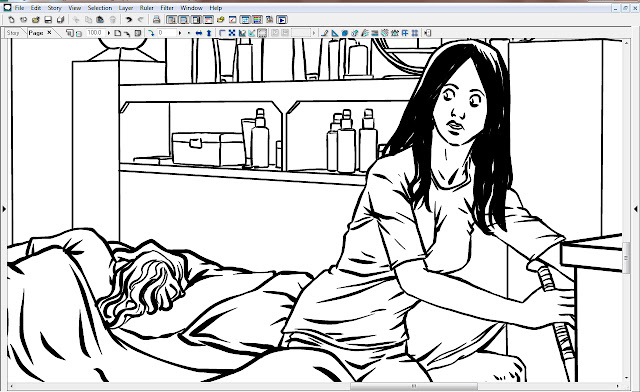 More like The Amityville Terror-ble.  HOHOHO!  You see, it's funny because I'm dissing the large amount of work that people put into the film.  Like a lot of modern horror, I get the feeling that the makers are working through some issues with women, but I suppose if it keeps them from taking up serial murder, where's the harm?
I sometimes count my blessings that I'm the only one reading this blog.*  I worry that someone involved with these movies, tv shows or games might come across the shitty things I say about them.

* Yes, I went straight from saying it's nice that someone had a creative outlet to keep them from serial murders to mentioning that I write this blog.  Irony duly noted.
Posted by Brigonos at 1/21/2017 12:11:00 am No comments:

I've said nicer things, you were just too drunk to remember them 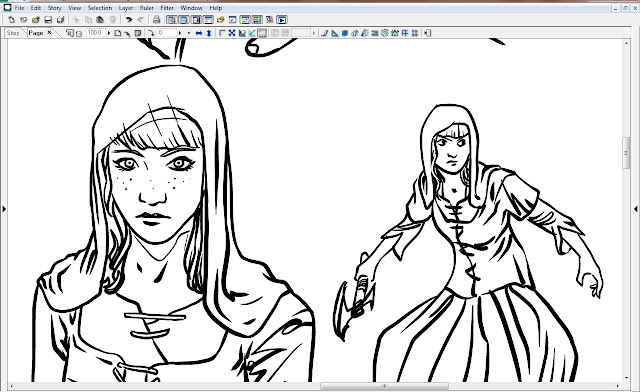 Is there like a new sub-genre in movies where black people's lives in historical periods are observed by privileged honkies?  If so, then Mr Church is an addition to the canon, charting as it does the intersection between the titular African-American man of mystery and the honky women of the Brooks family, whom for some reason he serves for three generations after being hired to care for the terminally-ill ex-mistress of a departed rich dude for what will likely be six months but which turns into six years, paying for the woman's daughter's college education, and then raising that girl and her illegitimate daughter in his own home.  It's a bit of a mess of a story and some of the twists of fate and monologues are insultingly contrived to the point that a woman with terminal cancer telling you about the important things in life just made me angry rather than punched me right between the Feels like you would hope it would, but it's a well-performed film - especially Eddie Murphy in the title role - I just wish all involved had a bit more to work with.
The one thing that did really annoy me is that at the end of the film - SPOILERS - the lead female (because why would a black man be the lead in a story that's named for him even in 2017?) is hosting Mr Church's wake and meets one of his acquaintances - the proprietor of a nightclub Mr Church frequented over the course of the film and from which he often returned drunken and bitterly rambling at the memory of his (presumably) departed father.  The two exchange tidbits about Mr Church and the lead female delightedly notes that Mr Church was a whiz on the old piano and that he brought the nightclub to life each night, and it's treated as a wonderful snippet as she sits down to type out her life story and all I'm thinking is "How is this an amusing vignette?  We saw how unhappy he was throughout the film, clearly this activity did not bring him joy or make him happy and he died after a life of bitter regrets which haunted him to the grave."  But no, Hollywood gonna Hollywood, and the film ends with a blonde honky being handed the man's house where she's been freeloading for at least the last decade and cashing in on his dang life story.  This is a really mixed message of an ending, or possibly I just should not be watching weepies.
Posted by Brigonos at 1/16/2017 11:44:00 pm No comments:

Go back underground and stay there until you're ready to die 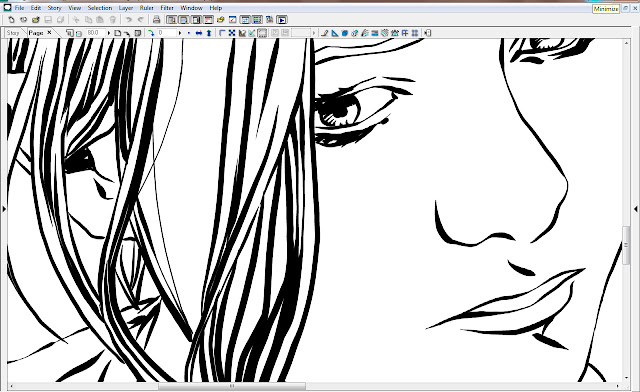 WHEESHT - looks like I'm really letting the old blog go to pot in 2017.  Nearly two weeks in the bag and only on my third post.
Call Of Duty: Infinite Warfare is no better to play or less frustratingly limited in ambition than any of the other COD games of the last decade. Not that it matters, since opinions on it formed the moment the first trailer dropped and ever since then it's just been a matter of justifying and reinforcing those first opinions by any means and never once ever considering the possibility of being in error - so basically having an opinion on Infinite Warfare is the same as having an opinion on Jeremy Corbyn. 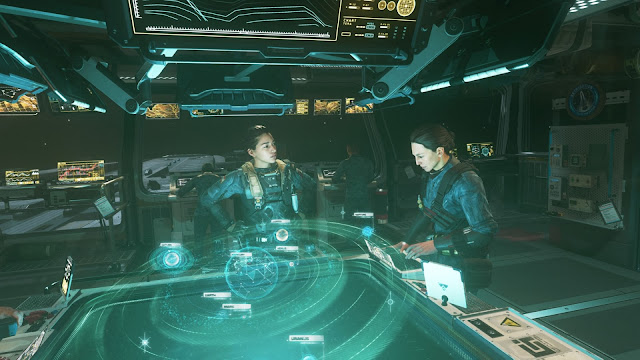 The big changes are the use of a hub where you can decide the order in which all but the initial and final missions are carried out, alongside the introduction of mostly-optional starfighter missions where you fly a remarkably easy-to-handle craft in some basic but fun dogfights, the best of which has you chasing and boarding a fleeing ship through the upper atmosphere of Urectum. 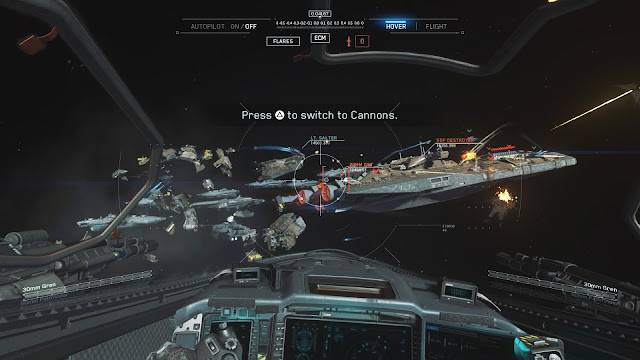 The game excels at set-pieces like this because the controls are so uncomplicated that you can enjoy the spectacle for what it is without being too annoyed by the bafflingly ubiquitous QTE sequences that no-one I've encountered seems to enjoy.  For some reason game makers still think they can fool you into thinking you're involved with scripted on-rail sequences by including arbitrary button-mashing like the stick-twiddling and clicking you need to go through every time you launch a solo fighter - although the loud WHOOSH and the whizzing launch tubes going past as you take off is fun to watch.
That bit is shamelessly lifted from the original Battlestar Galactica and Buck Rogers in the 25th Century, the kind of sci-fi influence that sadly doesn't extend to the rest of the game, which is alien-free and features an aesthetic and backstory that will be familiar to fans of the Killzone games, though most critics will probably cite the Battlestar Galactica remake as the main influence, rather than Space: Above and Beyond, a tv series with which the game setting and backstory has far more in common, right down to the more familiar tropes of heroic fantasy that NuBSG seemed to think itself above - although there is a fun sequence where you and a bunch of thick-eared marines in beach buggies storm what is clearly Moonbase Alpha. 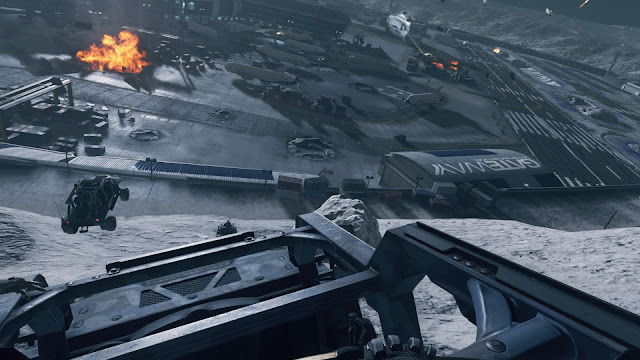 The story - as ever - is dripping in homoerotic machismo and an almost sexual fetishism of overly-earnest male bonding standing in for any character development, while the main villain is basically "what if Jon Snow was The Mandarin from Iron Man 3, only in space" and is just as stupid and ludicrous in practice as that sounds, but effectively comes off as the panto villain the series relies upon in order to justify the war crimes the player regularly commits. 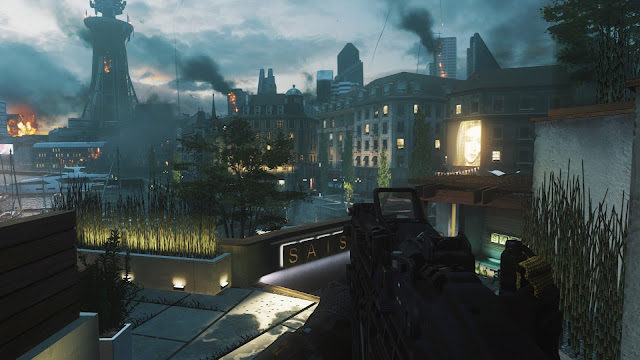 It's great fun when it isn't too challenging, but when it forces you to go back and replay bits - most likely because the method of taking out a particular enemy hasn't been explained to you yet - it gets very grind-y and borderline frustrating having to go through it all over again before the enemy in question shows up, and then possibly tops you almost immediately and prompts a repeat of the same boring sequence of events all over again.  The first time this happens is barely five minutes into the game and nearly made me stop playing altogether, until I realised that the game was forcing me to do something COD rarely does: stop, slow down, and think things through from cover - possibly the single most ludicrous conceit of the entire enterprise.  This is COD, dammit, an I wanna just do a shooting!
Ignore the haters: it's mostly good fun, uncomplicated to play, and lush to look at.
Posted by Brigonos at 1/12/2017 09:31:00 pm No comments:

Now we can drink Diet Coke as a family 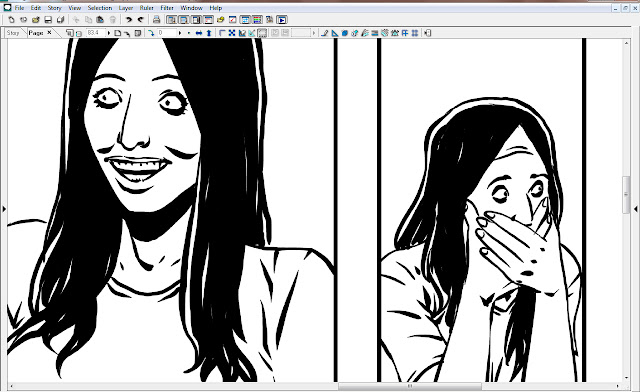 I am sure I had seen Treasure Planet before, but none of it seemed familiar this time around... well, that's not entirely accurate, because ho-lee shytt, JJ Abrams was clearly a huge fan, as there are numerous sequences, plot elements, scenes, and even action sequences that are lifted in their entirety that appear in JJA's sci-fi films, and not just a treasure map sequence which will be familiar to viewers of The Force Awakens, there's also Jack Hawkins' introduction where he's chased down by visor-faced robotic-voiced coppers on speeders for his joyriding through a dusty backwater and a scene where the Hispaniola escapes a black hole by riding a shockwave - recreated almost shot-for-shot in Star Trek's finale where the Enterprise does the same thing.  Once the Star Trek comparison was in my head, it was impossible not to see other similarities, especially Benn Gunn/Future Spock, Hawkins' absentee father narrative which formed the basis of Kirk's character in ST, the "random pipes = spaceship interior" aesthetic, and even after JJA left the NuTrek director's chair, the comparisons continue with Spaceport/Yorktown and an anti-gravity fight finding their way from Treasure Planet into Star Trek Beyond without as much change as one might expect, while - more tenuously - both films also feature terrible theme songs, though Treasure Planet's soft rawk monstrosity at least serves to highlight that animated film directors from 2002 at least understand how to initiate, stick with, and then actually resolve a Daddy Issue theme.
Desperate to fill a blog post?  You betcha.
Posted by Brigonos at 1/04/2017 11:03:00 pm No comments: 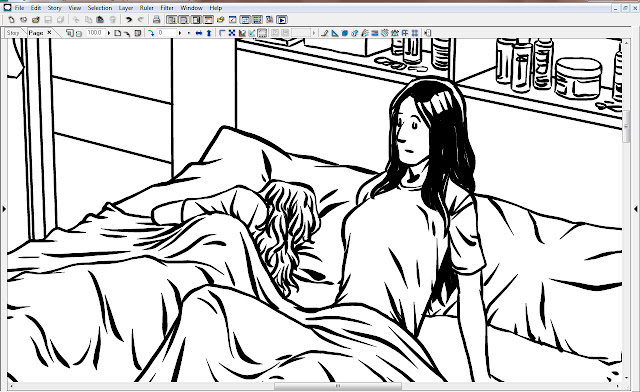 Watching National Geographic's rather dry MARS, and boy, it sure does have a bit of a boner for this idea that corporate investment will be humanity's salvation in the arena of interplanetary enterprises.
Don't get me wrong, that's all well and good if you're making cheesy fantasy tosh where stuff is explained by wizards or technobabble, but the show's mix of drama and documentary vignettes seems to suggest a striving towards a more fact-based slant on the matter, so an examination of where culpability lies for the shrinking of the programme over the last couple of decades despite a still-considerable investment of taxpayer dosh seems a bit of an odd thread to omit from the fact-umentary tapestry it seems to be weaving.  Perhaps I am being too harsh, and later episodes shall explore the role of corporate America in the downfall of human space exploration, but based on the first two episodes, it doesn't have much to say about the matter and prefers to suggest that the opposite is true: that the people who have throttled humanity's ambitions towards extraplanetary expansion so they could cash in are actually a good thing because at some point one of them might actually decide to invest some of that cash in something other than renting access to rockets that the Russians were ready to throw on the garbage heap three decades ago.  If I were a betting man, however, I'd be putting my money on the show just showing some pictures of Challenger exploding while sad music plays and then leaving it at that, as based on the first episode, they seem to just hand-wave things away with a wistful "oh some billionaire came along and gave us all the money we needed to build a rocket" and that's all the world-building we get.
I apologise for banging on about the capitalism of the space programme, but it's the one thing - even more than the creation of new technologies - that stands in the way of getting off this increasingly-disappointing mudball, so if they're going to come up with a plausible explanation for anything, it would have to be this.
Of other matters, there's an otherworldlyness to Mars, and I don't mean in the "it is literally another world" way of the setting, I mean in the "I don't think English is the first language of whoever wrote this" kind of way of the actual production.  Nothing seems to gel with anything else, and the first episode especially seems to be an incredibly odd mix of sinister and whimsical, often seeming to be a clumsy build-up to the sight of a dead child struck down at the hand of their own curiosity.  It looks beautiful, but I have no idea what it's aiming for, so cannot judge if it has hit the mark.
Mars is a bit of an odd duck.
Posted by Brigonos at 1/02/2017 08:00:00 pm No comments: