Look in the mirror, man - you're good looking, but you COULD be beautiful 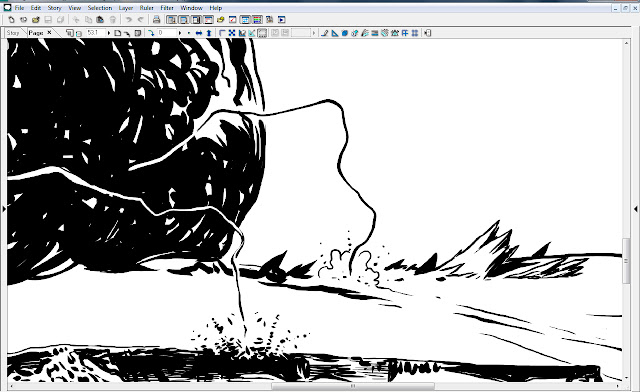 Hey youse guys I have a totally good excuse for not updating the blog these last few weeks, and it's not the obvious reasons you're thinking of - I'm lazy, have a drinking problem, and finally twigged that no-one is reading it anyway - I have been actual for-reals busy on a thing.  For someone
That you might see.  Sometime.
Maybe.
No it's not anything that will see print - it makes me happy and sad that you have more faith in me than I do - and nor have I been fortunate to sucker someone into letting me contribute concept art to their movie again, but nearer the time, assuming there isn't some catastrophe that prevents it coming to pass, I will Let You Know that The Thing has officially Happened.  In the meantime, it's nearly the anniversary of me putting the first bits of North online here on the blog under the assumption that it would later be useful to have previously-aired material to use as an archive when I finally figured out the technobabble necessary to put my own webcomic site together to run the rest of the strip (long story short: I never got enough money in my Paypal account to pay for the site because no-one on eBay wants to buy PS2 games or titty comics - which are literally all I have in my home that I can't eat, and don't think I haven't tried), but I should probably pull the trigger on more of that or just abandon it like I did Frank.  Anyway, come July, I guess we'll see if I follow up on that threat and start spamming your feed on a daily basis again.
Posted by Brigonos at 6/14/2017 11:42:00 pm No comments: