If you touch me again, I'll kill ya

I've genuinely lost count of the number of times I've sat all the way through The Last Boy Scout, a loud and knowingly brash LA-based anti-noir that came with its own opening music video sung by Bill Medley, continued through some classic deadpan one-liners from star Bruce Willis in the role of near-psychopathic cold-blooded murderer-cum-PI Joe Hallenback, culminates with Damon Wayans' day-saving hundred-yard throw despite a bullet through his million-dollar hand, and then ends on an uplifting note as the male lead tells his wife that he wished he could spit in her face.  Its fantastic and I love it and I am gutted that its director, Tony Scott, took his own life after being diagnosed with incurable brain cancer.
Scott's legacy is a healthy and populist one full of star vehicles and glossy action scenes from his mid-80s era-defining Top Gun to later efforts like his remake of Man On Fire, a film whose artistic legacy is far-reaching as it brought the world the slow motion shot of a male lead walking away from an explosion in the background with nary a glance back, which has gone on to become a defining image of male badassery in popular culture despite the original explosion in question being caused by a bomb stuffed up a man's arsehole and the reason the male lead was walking away from the explosion was because he didn't want to get splashed with burning poo.
Though he could have easily been an arthouse scumbag making movies about gay cops or something, Scott rarely let down the teenage me because he was a populist entertainer rather than a cinematic auteur, with movies tailor-made for loud, crashing soundtracks and tense stare-downs between male leads, but unlike many of his action movie contemporaries he could actually direct an action scene, his camera often prowling around looking for a new angle on particular elements of scenes rather than just jumping about to give a false sense of vérité during fisticuffs.  It's a trait I only really see in Eastern directors or those low-budget film-makers who cut their teeth on action television in the 1970s and 1980s, and is a method based in the belief that the audience should be able to follow what is happening in something as base and vulgar as a fight scene rather than simply figuring out who won by seeing who's standing come the scene change.  Scott was a film-maker for whom the narrative mattered in ways both small and large and for whom gloss was stage-dressing for the story no matter how slight that story ever became, and screw it, I'm gonna go watch Last Boy Scout again. 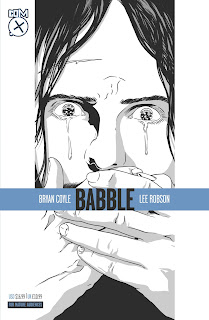 Well, it's time for my weekly daily post on the blog and this here is the final cover for a book that I went and drawed, now all designed, laid out, and solicited in Previews.
It's an odd one is Babble.  When I was fishing around for a longform project (although at the time if you'd asked me, I wouldn't have said I was networking as much as "bullshitting about comics with some other nerds on the internet" as I didn't know then - or arguably now - how to draw a comic page as I'd been laid off - again - and was really just trying to fill my time with something other than three hour bouts on San Andreas and evenings in the pub), I was surprised that so many creators seemed obsessed with high concept conundrums like "one day everyone comes back from the dead", "the entire population becomes amnesiac", "the whole world develops diabetes" or "everyone falls asleep and wakes up as a dinosaur" and the graphic novel/comic series would follow what happened next, but with Babble, Lee was more interested in exploring his feelings about a high school shooting and the hag that squashed his heart via a short story about the beginning of the end of the world (rather than the spectacle that follows and the last-ditch plan that saves us all).  Most people would just put a housebrick through her window at four in the morning while she's fucking someone you thought was your friend, but not Lee - he has to go and write a story about it, and then later develop said story into a graphic novel whose page count suspiciously mirrors that of a screenplay and which features a timely vein of commentary on gender roles in zombie fiction, though when I actually started drawing the book twenty years ago, zombies weren't actually as played out as they are now, so this may be the one time that my slow pace and general unreliability might have worked in the favor of the project I insist on ruining.  It intrigued me, is what I am saying, because it tried something different to what I was seeing elsewhere, with Lee actively telling me to rein in anything resembling the excessive gore that often typifies sophomore comic book projects, though he balanced this by insisting that the main character look less like a child - which took the form of terse emails in the early hours insisting that I draw her tits bigger.
I shall probably mention more on the subject as the publication date approaches, but the cover price shocks me - 11 quid for something I have drawn?  You could get a book where Judge Dredd fights a werewolf in Old New York which is also the Mines of Moria for that much, and yes, that is actually my benchmark for comics that you need to read.
Posted by Brigonos at 8/18/2012 12:46:00 am 2 comments:

Do you think you'll be able to respect a husband who pulled the scientific boner of all time? 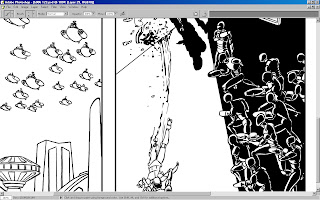 You know, the rents are a lot more reasonable in Peru 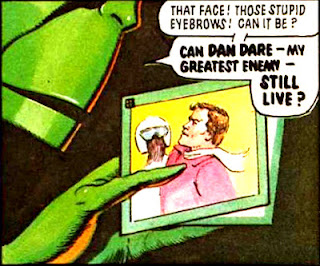 Today I have been chilling and catching up on my Eagle reading.  I think Star Rider seriously needs to be reprinted.  It's amazingly entertaining stuff. 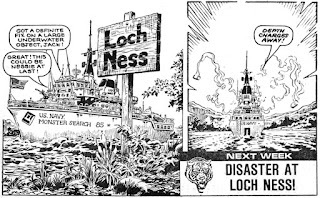 I'm bored - what say you go out on the wing and pretend to be a gremlin? 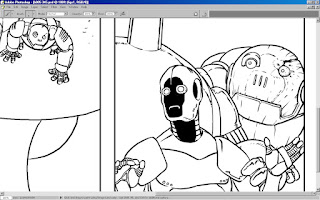 I have, for the better part of a month, had 707's proprietary theme from Megaforce stuck in my head to the point that it appeared three times on the one playlist of songs I put together for the gym.
WARNING: VIDEO MAY CAUSE VIEWERS TO THINK OF JOURNEY

Labels: I found a Journey song we haven't covered yet, Rathbone, screen grabs

It's official - people in the tent rental industry are just horrible 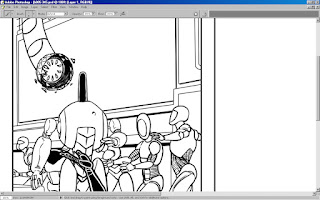 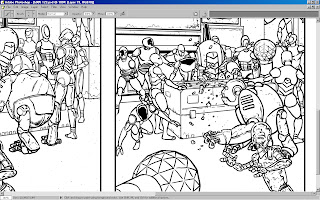 You would think I would learn to avoid doing repeating panels because of how much more work you end up having to do just to make them line up with each other, but here I am again...
Ooh - new bond trailer is up...