In my heroin days, this would have been a perfectly acceptable first date 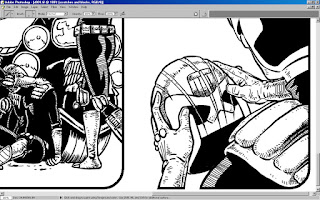 Six days, six pages.  That's the plan, internet... that's the plan.
Of late, I have caught up with Caprica, a show I avoided first time around as it seemed to be an origin for the bits of Battlestar Galactica that I hated - specifically all that creepy sexbot bollocks - and while it's okay - not good, but okay - it suffers from a complete lack of awareness.  This is a society which twenty thousand years ago had developed virtual reality, the American legal system, cars, car tax, licence plates, home computers, the internet, 24 hour rolling news coverage, digital satellite broadcasting, bicycles, domesticated dogs, pencils, mobile phones, cigarettes, touchscreen technology, catholic schools, talk shows, football stadiums, the word "Trojan", the English language, the English written language...
...And yet they have not invented the word "fuck".
This would not be a problem except they use the analogue for the word "fuck" ALL THE BASTARD TIME and it kept taking me out of things to think "these are only actors saying words that mean nothing."  Perhaps I am misunderstanding the aim of telly drama, but I always assumed it was to have me not do this.

I can't believe I bleached my mustache for this 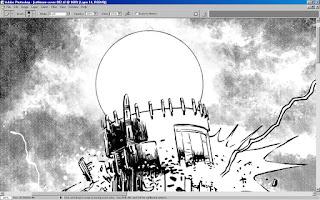 Wild tigers do not have the qualities of a good president.

I am not drawing today because I have finished up my projects and can have a day off or two before I jump into the world of Dredd for a one-off that combines my two favorite things (post-apocalyptic fascists and polar bear-related murder), so I have been watching a marathon of CBBC's Wolfblood©, a werewolf show that makes a big deal about not being about werewolves to the point that one character mentions werewolves and is immediately berated as a fool because "it's Wolfblood©, not werewolves!"  So this werewolf show full of werewolf mythology like inadvertent transformations during the full moon is not a werewolf show at all, nor is the mythology ever explored in the context of shape-changers or tricksters even though this would give the show an in-built rationale for the arbitrary changes of character or introduction of new superpowers from nowhere that drive a lot of episodes and would also double as a metaphor for The Puberty, no, this is about Wolfbloods©, the completely original made-up and copyrighted concept of BBC Wales, and as werewolf shows go, it's not a patch on MTVs Teen Wolf, but relative to the rest of CBBC's output, it's much better than it has any right to be apart from some confusion in the scripts between what is branding and what is actual storytelling to the point that you will wince everytime someone says the word "Wolfblood©" even though you are watching a television show aimed at 8 year old girls.
Apart from being a functional paradigm for the show itself, the episode "Eolas" is especially hysterical for how wrong-headed and clumsy it is in utilising subtext to the point that it is almost impossible to read the story as anything other than "lying to children about serious stuff is okay" because their deference and respect of their elders is not something which has to be constantly earned and their formative opinions are not to be encouraged if divergent from accepted wisdom.  It centers on a plot McGuffin that is essentially "children learning to meditate is the same thing as them taking drugs and will lead to hanging out with working class people who are all crooks" and yes, I know that chain of logic and the conclusions drawn doesn't make a lick of sense, but this is actually what happens.  A child meditates, it blows her mind and she ends up taking a truck ride with a stranger to the middle of a city where she seeks out poor people who immediately try to rob her.  The cliched story structure of the average episode means that rather than be painted as the actions of plain old middle English bigotry, the anti-meditation slant will turn out to be the result of Experience, and lo and behold, we discover that the middle class housewife decrying meditation as evil used to have a cousin who was into meditation and it ruined her life.  Yes really.  The message of the story, stripped away from the ludicrous specifics, is thus that children are wrong to question their elders because their elders only lie and hide things from children when it is something they really need to know about in order to make an informed decision.  As I say, aside from being an outright irresponsible moral, it makes not a lick of sense in isolation as a story in itself - it only makes sense if you've seen lots of other sci-fi shows that explore the theme of addiction through allegory and don't need the show to actually join the dots in a coherent manner for you as a viewer, but even speaking as someone who has watched far more sci-fi and fantasy shows than could possibly be healthy, this is a story about a shrill housewife shouting at her child to shut up, and then being proven absolutely right to do so because children are all fuppin' idiots. 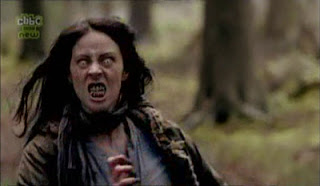 I make a point of mentioning class warfare, too, because there's also a strange setup to the show where everything seems to be geared towards a stereotypical depiction of a working class provincial community, from the bodhrán soundtrack, Scottish folk theme song, the cast having names like Shannon, Madeline, Rhydian, the rural setting, and of course the folklore that informs the premise of the series itself (werewolf folklore being uncommon in England compared to elsewhere because actual wild wolves are extinct there - a fact the show itself points out more than once), yet the setting is a "slightly Northern" England that doesn't actually exist outside television idioms like the cafe from Friends or the school full of kids who don't have mobile phones or internet access in a year beginning with a 2, and the end product resembles more a picture of a community of summer-cottage residents.  But perhaps I'm being unfair as there's no overt class, religious or racial divide in this community beyond what we can read into it as viewers, and what we see without looking too hard is an implicit understanding of an unspoken dominant monoculture where - tellingly - the only people who are excluded are those from "outside" who express elements of cultural identity that doesn't gel with groupthink.  There's no talk of people's jobs in this supposedly remote community, no hint of what people actually do for a living, and it is very, very hard to see a great deal of the text concerning "wild" Wolfbloods© as anything other than gypsy-bashing to the extent that the overall story arc for the lead family is essentially that they're hiding their racial and cultural identity from their neighbors and close friends because they're ashamed of it.
I accept that it's asking too much of a tv show aimed at kids these days - on top of the story making any objective sense - to not reinforce class prejudice when the other tv shows from which it derives all its ideas and plots are telling kids to make fun of differences rather than celebrate them alongside everything else that makes each and every one of us unique and beautiful as people, and the auslander is thus necessary in Wolfblood© only to instigate or foment conflict amongst the community and threaten the dominance of the prevailing orthodoxy - but never as a good thing, not even when challenging lies, dissembly or outright bullying both emotional and physical.
In this, Wolfblood© is a conservative and cowardly show, but somewhere in there I think there is the potential to be something a lot better with a bit of seasoning and experience, and even if that is never realised, then... well, it's only CBBC.  It's not like anyone cares what their kids are watching, anyway.
Posted by Brigonos at 11/05/2012 11:28:00 pm No comments: