Satan is not in these books, he's in here - in your hearts 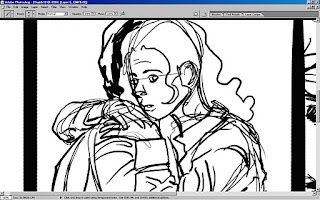 It's nearing the end of what has been a surprisingly terrible year for someone who is what I would personally describe as - but then I'd have to in order to get through the day - a "functional" alcoholic, and since everyone else is doing a nice and naughty list of comics I thought I'd try the same. The high points have been webcomics, mostly, so it might be time to invest in some kind of iPad knock-off so I can read them in the bog rather than on my bedroom tv via the PS3 web browser each morning while I have a scratch, but in no particular order (and not particularly comprehensive or even complete): 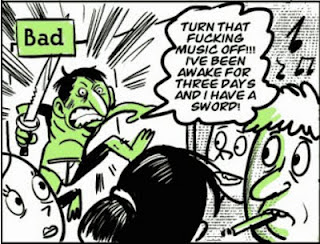 One of my favorite 2000ad creators of recent years if only Tharg would actually employ him, making a virtue of too much information with a part scatalogical autobiography, part rant about whatever imagined slight popular culture may or may not have inflicted upon him, Spanish-based Irishman Bob Byrne is either thought-provoking or infuriating depending upon your tolerance for contrary opinions voiced through deliberately-loaded terminology and/or 2000ad printing something outside its house style of grizzled and sarky blokes - occasionally with vaginas - going up against panto villains and/or Cthulu.
The best arc for my money - and in the context of Bob's comics, "arc" means "two or more strips that may actually be related" - is 'Just because you can', where he flips between telling you how to use Photoshop and reminiscing about that time he killed someone, and while his webcomic days have entered an abrupt hiatus as real life and the demands of getting his print work out there take precedence - I can relate - the archive is well worth checking out. 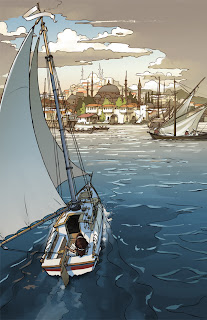 Tony Cliff's gorgeous pages are slightly too large for the website, but his clean lines and organic colouring produce lush settings to compliment the accessible all-ages storytelling and likeable characters. I really dislike those snobs who go on about the prevalence of superhero books on the shelves and bang on about manga or Euro-comics like they possess some sort of inherent intellectual or artistic superiority because they're about child rape, civil wars or boiler-suited ninjas kicking each other in the head, but I will admit that the sheer volume of North American superhero titles trapped in an incestuous continuity circle-wank is oppressive even to someone like me who can actually follow such things, so it's great to see strips like Delilah Dirk out there because they remind you that serialised adventure comics deserve to have a future that doesn't belong exclusively to one particular genre.

The first Zombo outing in 2000ad didn't really click for me. It had the odd entertaining moment and idea, but largely it felt too much like the kind of concept a writer would put out during 2000ad's 1990s phase or in the pages of turgid 90s schlok-paper Toxic, with an unrelatable uber-violent anti-hero protagonist being all unfazed by the ultraviolence around him and as much time as I have for this in ludicrous cartoons, I could go my life without reading another Grudge Father, Officer Downe or Coffin. Still, Zombo did have its moments, but Zombo 2 was much better, like those responsible for Zombo 1 had got it out of their systems and moved on, or, and I heartily think this more likely, those involved knew they'd done that already and had to do something else rather than just recycle the excesses of part 1, which they did by ditching the Death Planet trappings in favor of a reality talent show. Zombo 3 moves on again from that premise to God Knows What, with shouts to everything from Jack Kirby romance comics to Godzilla, though its greatest achievement will remain for me the sheer impossibility of having a stiff-upper lipped English character who's a bit quirky and tea and crumpets-ish that doesn't come off as clingy desperation on the part of the writer. Seriously, that kind of character just gets on my fucking tits something rotten, so it's amazing to see one here that's entertaining rather than annoying.
I shan't go on about Zombo 3 because the greatest joy of it is turning the page to be greeted with newer insanities and tangents trapped in the main plot, but I will say it comes off as the work of creators who aren't trying to prove anything, and for that it should be treasured.

It probably wasn't trying to educate me, but Dumbing Of Age accidentally did that on several occasions and for that I shall be thankful. It may or may not work for you depending upon your tolerance for humor derived from familiarity with the many characters who started life in the author's disparate previous works, but for me it was a pleasant surprise to find the short chunks of story easy to digest and follow, with only the odd duff note (date rape, campus superhero) distracting from the otherwise enjoyable mumblecore dramas of kids with first world problems.
A word of warning, though - within minutes of new strips appearing, they seem to be flooded with comments from the same few dozen die-hard fans/friends of the creator. Some people find this kind of thing cloying, but I find it a heartening display of goodwill and community to be encouraged.

You can basically write your own review of this without me being here. "The Birds, but with bears instead of birds" was something I was always going to read. I went to see Yogi Bear in the cinema because it had a bear in it. In the cinema. I did have two nieces with me, I admit, but I was going regardless.
I like bears. 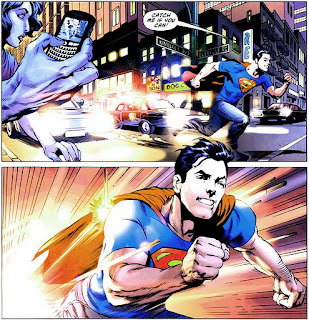 I am enjoying this so far, but my mental jury is still out on making Superman's embryonic superhero career one of embracing the idea of social justice rather than unqualified altruism, as to my mind Superman is a reactive figure otherwise he isn't really Superman, though Morrison did write some rather fine and clever comics in his time and I'm willing to give the benefit of the doubt that I'm jumping the gun to criticise so early, as it took me a full year or so to be disappointed with his Batman run. 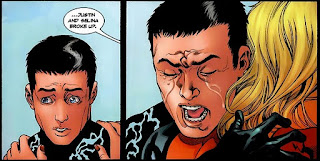 In its favor, Christos Gage's Avengers Academy is a throwback to the 1990s era of teen superhero comics, but on the other hand, Christos Gage's Avengers Academy is a throwback to the 1990s era of teen superhero comics.
As much as I enjoyed seeing Avengers Academy hit the shelves with its roster of badly-monikered nobodies, it is not actually a good title, though I let it wash over me when I was on the lavvy trying to squeeze out breakfast without much chagrin and while for the most part it's been entertaining seeing Gage play out the usual trope inversion that has become a staple of trashy teen dramas, with the introduction of a character I have not only actually heard of but have no small amount of residual affection for I'veactually decided to drop the book, as Julie power/Lightspeed (ex of Marvel's mid-80s oddity Power Pack) has been retooled from an articulate and sympathetic POV character into a hot bisexual in a cutoff top who delivers soapbox monologues in So-Cal speak about how raping children is wrong and how she doesn't want to be reduced to a label because of her sexual preferences even though the writer of the book is giving interviews about how he's standing up for all the hot bisexual minors of the world by having one in his comic book.
Basically, one of comics' few interesting or non-sexualised female characters (she was both, maddeningly) has been "improved" by making her neither. I dropped Red Hood and the Outlaws without a second thought after the first issue thanks to the portrayal of one of the female characters in that, but it's disappointing that Avengers Academy has to let me down this late in the day for much the same reason, though I'd be lying if I said it wasn't the worst thing about the book - that would be the addition of X23 as a cast member. I won't lie, that would have made me drop the book as well.

There's this bit in the latest Duke Nukem game where you take a poo and then pick the poop up and throw it around the room and it unlocks a trophy/achievement titled "Turd Burglar" on your profile. And for some reason I was surprised when a comic book based on this game did not turn out to be the new Watchmen.
That I did not like this comic is not the creators' fault. I accept that now. 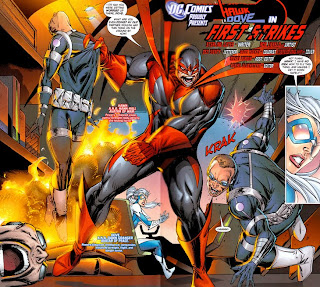 You know how they say "bad pizza is still pizza" so it's technically still good so you still throw it down you even though it sucks and there's better pizza out there? that pretty much sums up the experience of enjoying Hawk And Dove - I love it for its sheer badness and I can't help myself. It will likely clog my arteries and kill me but I love every grimace-drenched page of it for its lack of pretense and the dedication to bombastic stupidity that makes it read like a parody. It's still in the 'naughty' part of this list, of course, because it'd be mad to put it anywhere else, but I was drawing a page tonight and spent something like a half hour just redrawing a character's mouth because I couldn't get the same three expressions (all varying degree of a toothy grimace) out of my head and wanted to make sure that I didn't fall into the same trap. Basically, this comic pushed me to be a better artist.

In case I don't post again this year, please have a Merry Christmas and a great new year. When next we cross paths, I hope to find both parties in better sorts and higher spirits.
Season's best to you all!
Posted by Brigonos at 12/24/2011 01:00:00 am No comments: