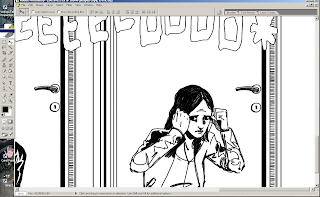 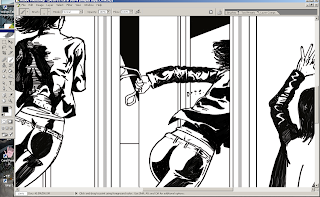 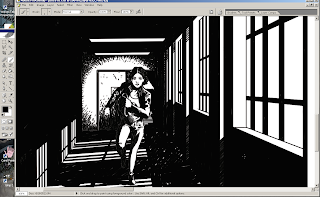 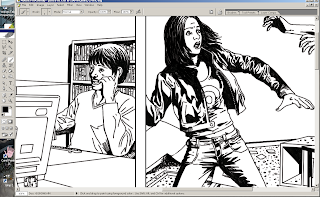 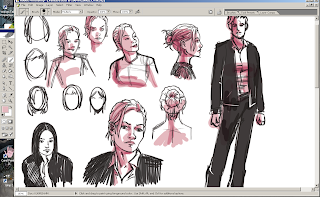 God I'm a messy artist - I can see now why I take so long cleaning things up to a presentable state. 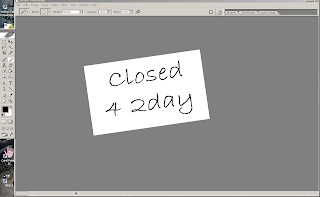 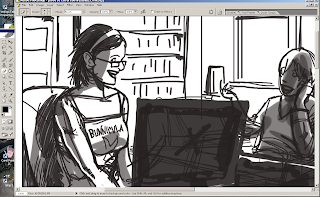 Unproductive day yet again, catching up with my thumbnailing in the end when I got an hour free in the evening. Still hoping to keep to my 3-4 pages a week rate, mind.
Posted by Brigonos at 10/23/2009 11:40:00 pm No comments: 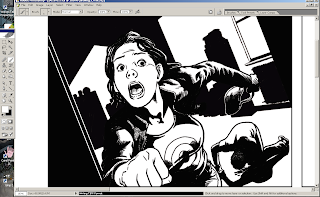 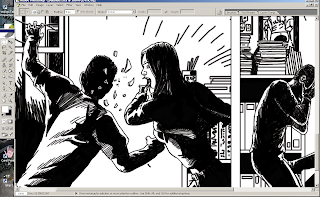 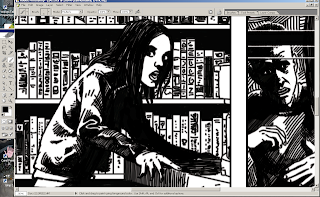 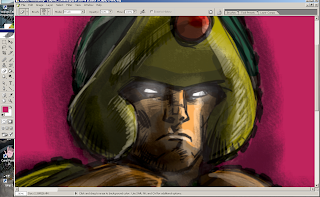 Drawing drawing drawing... and for a wee break from that: sketching for the 'draw Johnny Alpha in 15 minutes' compo over on the 2000adonline website. It's quite handy to sketch at speed, actually, as it helps to identify areas of weakness like perspective and consistency in line. Or it just shoves my own ineptitude in my face.
One or.
Posted by Brigonos at 10/19/2009 10:23:00 pm 1 comment:

Darned if I'm putting it on the blog, though. 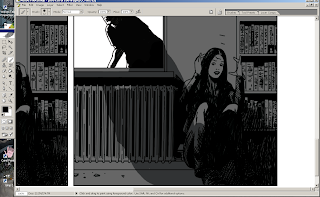 No boozing tonight, sadly.
Just fiddling about with greytones to see what works in between bouts of Uncharted 2 and catching up with my manga reading. The draughtsmanship in Nausicaa is quite impressive, as is the scale of the story. A lot of fun.
Yotsuba&! has been praised elsewhere so I shan't bother adding to that - instead I'll offer that this is the kind of manga that could benefit with more investment in the reprint quality and cultural appropriation of the western text, as it's certainly an accessible work if you're already deeply into manga, but if you're coming to it cold, the flipped pages throw you out of the story in the disparity between the flow of text and art. Which is a pity, as this just the kind of book that could encourage a new or younger audience of the joys of reading and storytelling, but here that's lost in favor of chasing a cheap buck and pandering to a notably elitist and obsessive body of fans several years beyond the age group that would most benefit from a good translation.
Posted by Brigonos at 10/18/2009 12:23:00 am No comments: 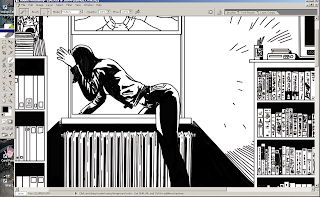 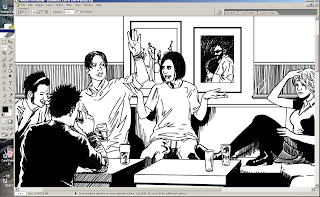 Drawing one panel in particular, I'm worried that I've lost touch with what constitutes 'wankers' these days, in case I don't draw what's in the script. These are the things that keeps bizarro-Bryan awake at night - the real Bryan is too busy stressing that Knight Rider never went to a second season. 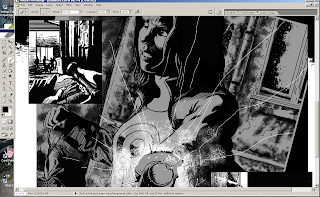 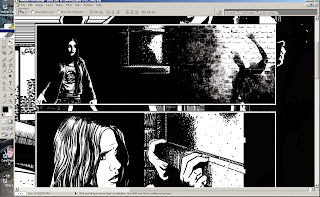 Still struggling with my tech literacy and time management, but slowly getting there by experience and osmosis - true for all things, I imagine.

I'm thinking about finally biting the bullet and watching Heroes episodes I've downloaded thus far, but keep getting put off by overheard opinions of season 4 and the slightly creepy vibe I get from the way they're pushing a lesbian character turn as a reason to tune in. Some girls have real problems coming to terms with experimentation and what it means for their life, so seeing it presented as part of a circus is off-putting even for me, and I'm not even that socially aware - quite the opposite, actually, given my anti-talent for sticking my foot in my gob with almost epic frequency.
Posted by Brigonos at 10/13/2009 11:59:00 pm No comments: 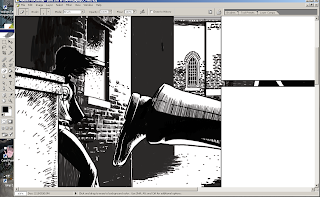 Just finished Marvel Alliance 2. Well, that was abrupt.
Still better than the first thanks to a wider variety of individual hero moves and much better graphics and sound, but far too few characters, and I'm not just saying that because they didn't make the inherently awesome move of having Howard the Duck in there with an optional Molly Hayes/Franklin Richards skin. I now have four days to finish Arkham Asylum before Fallout 3: Game of the Year Edition lands, and by 'finish', I mean start and then finish.

Slow tv day. Caught up with Cold Case and Crash, and my inexplicable Home and Away viewing continues via Youtube. When I say I watch crap, I really mean I watch crap.
Posted by Brigonos at 10/12/2009 03:07:00 pm No comments:

Nice lazy day off - hangover related - without drawing anything, and it's back to the not-terribly-burdensome grindstone of drawing funnybooks tomorrow. Caught up with some cinemagoing when we took my sister's weans to see Up, which was a great little film that plays the emotional manipulation card well and makes a nice change of pace with it's geriatric hero and willful absurdity.
Played my way through most of Marvel Alliance 2, or at least finished the Secret War redux, the Civil War section, and left it at some tacked-on nanite hacker storyline that I'm surprised didn't actually turn up in the comics, but its presence in the game does at least tie together some disparate strands that were left dangling by the actual comic storyline upon which the bulk of the game is based so far, particularly for the reactive (and thus constantly-aimless) Nick Fury character.
Watched some telly, with Smallville once again aiming too high, Sanctuary upping its game by seeming to have chosen a direction, and Stargate Universe disappearing up its own arse in what I consider to be record time for a tv series, even one made by the Sci-Fi Channel (now renamed Sy Fy, as if that alone will shake off the stink).

'Tis the weekend and I'm quite pished, but making the obligatory daily post: thank god for Firefox and it's spellchecker compatibility! Oddly, 'spellchecker' doesn't register as a real word, but in my drunken haze I'll fight anyone who suggests it isn't.
Hooray for genetic disposition towards alcohol reliance and internet grammar machines and how they work! 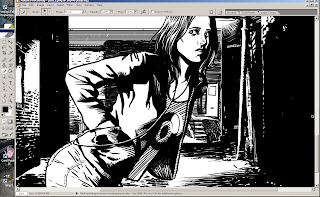 I'm watching My Super Ex-Girlfriend and Holy Jebus this is painful. Who thought this was a good idea for a film? Well, apart from the guys who made Superman Returns, where a super-powered stalker was also something admirable.
Shark bit was goofy fun, mind.
Posted by Brigonos at 10/09/2009 01:34:00 pm No comments: 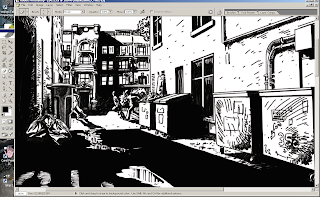 Watching: Hell in a Cell, Lincoln Heights, 90210, Melrose Place, Sons of Anarchy
Listening: Podcasts
Reading: Incredible Hercules, Batman and Robin, Ultimate Spider-Man, Shazam and the Monster Society of Evil, Batman: the Brave and the Bold
Posted by Brigonos at 10/08/2009 09:57:00 pm No comments: 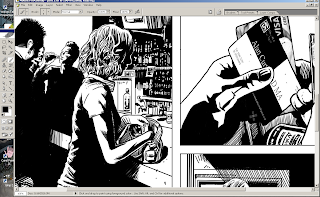 Last episode of the Black Donnellys tonight - this better be good!
In other Coyle-related news: alcoholism. 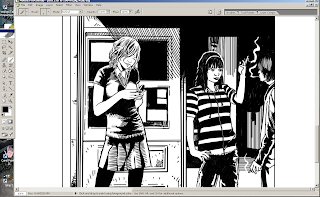 Reading my way through the online comments posted in response to Cheryl Morgan's post about the banning of a hard-name-to-spell uberfan's banning from a comics con, I'm amazed once again at the lengths the Irish go to in order to make ourselves look like a bunch of bog-trotting backwater wankers who fight with our own shadows on the flimsiest of pretexts, presumably while laid on our backs launching alcohol-infused urine into the atmosphere and laughing though our rotted teeth before expressing amazement that we've just pissed in our own faces yet again. No matter how that matter is eventually resolved for good or ill, Ireland still comes off as the abode of small-time hobbyists rather than dedicated professionals. Sad. 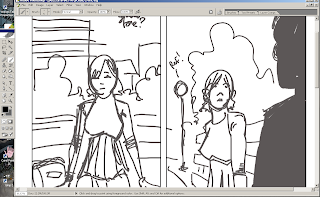 Still working my way through the thumbnail stages of the gn, not getting much drawing done just yet - the planning stages of anything seem to take up more time than the actual event itself, and that's certainly true of comics, as they only take about five-ten minutes to get through but can take a month of someone's time to draw.
Posted by Brigonos at 10/05/2009 10:55:00 pm No comments:

"But saturday is best day for drinking!"

Note to self: don't start boozing at 2 in the morning. 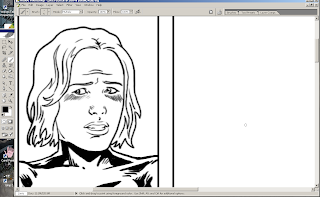 Saturday evening and guess who's not boozing? I'm not boozing! Yet, anyway - I'm still Irish and there's certain standards that have to be maintained. That and my family have a disposition towards alcoholism. 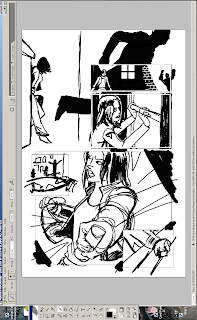 Just in the planning/layout stages for the rest of chapter one of the gn. Watching tv, being all creative-y and thinking about stuff, but mainly that translates into bone idle laziness interspersed with moments of drawing, shopping, booze and action sitting.
Eastwick: toss, not loving it.
Mercy: Toss, indifferent.
Flashforward: boring, done with it.
Glee: toss, loving it.
The Vampire Diaries: emo, indifferent.
Cougar Town: Scrubs, can't explain why, but it is.
Also getting into Marvel Ultimate Alliance 2, which is fun, especially the factoid tidbits that come up during loading screens and which seem to have been put together by someone whose knowledge begins and ends with the concept sketches for the game, such as "Wolverine has six claws" and "projectile attacks let you attack from a distance."
Posted by Brigonos at 10/02/2009 06:50:00 pm No comments: 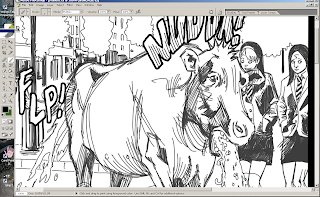