Put your arms around me. I need their warmth to keep the chill of death away.

I'd planned to post a strip daily for the week leading up until today, but life got in the way of that plan so I decided to just bung 'em all up now.  These are awful and I have posted a couple of them here on the blog already, but they are vaguely supernatural or horror-themed and thus appropriate to the season, though they do have the novelty of being roughly a year apart in their creation so you can see a vague progression in the artwork starting with the appalling Binmen of the Apocalypse, which may or may not be the very first comic strip I ever created back in 2005 (it's in a vague tie with Love Is Hell, an Eddie Robson joint that appeared in FutureQuake), and then a year later when I came to draw Mark Woodland's On The Prowl I was clearly going A Bit Mad with Photoshop filters, which it took something like five years for me to stop doing to the point I could do a decent service to people's scripts.
Slightly more worrying than the eye-watering blurs and tragic anatomy would be my clumsy attempts to make jokes about racism that sort of read to me to just be racism, so apologies for that in advance should you dare to read further, but you have my sincerest assurances that I am not a massive racist jerk and merely sound like one.
And, of course, Happy Halloween to you all. 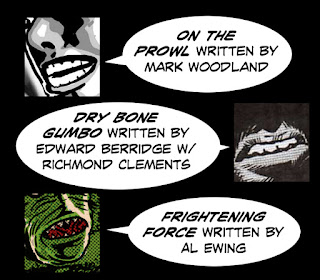 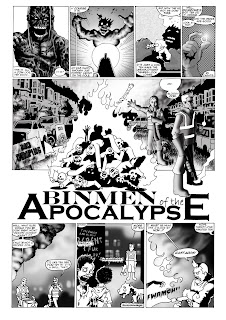 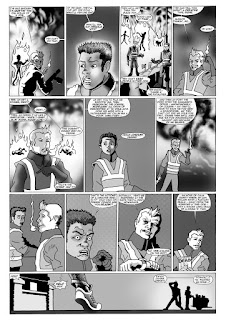 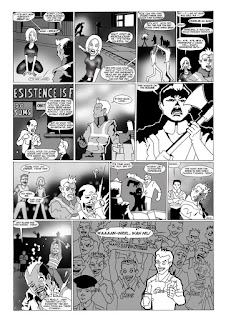 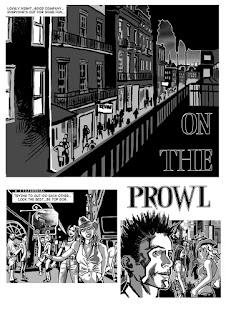 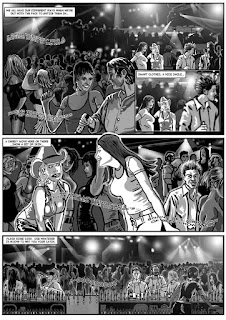 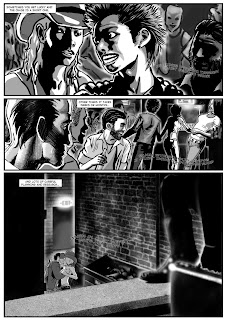 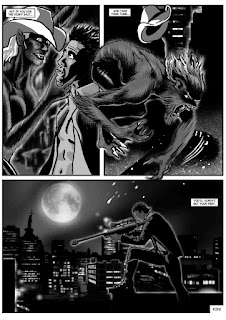 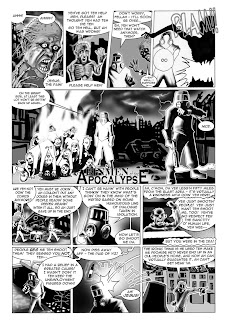 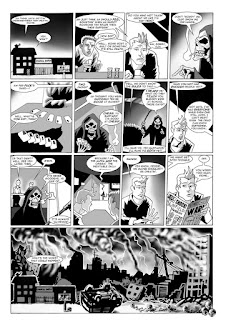 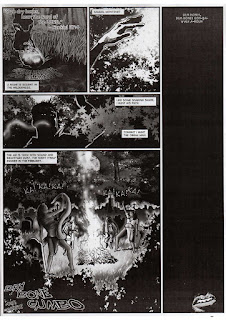 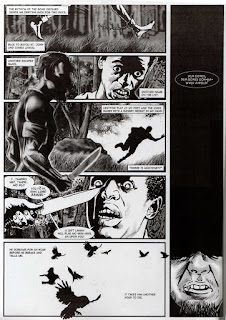 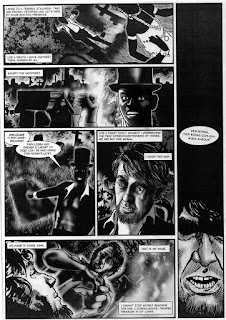 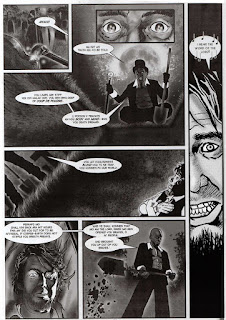 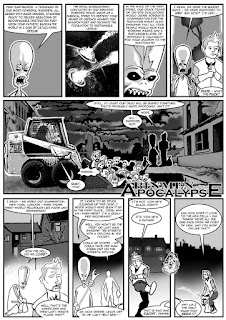 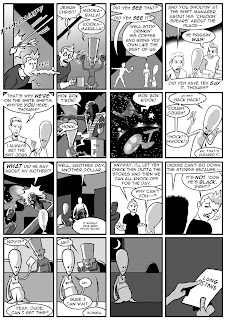 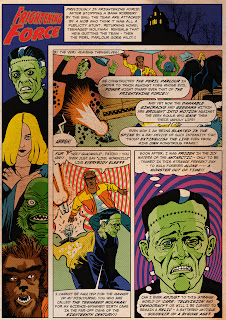 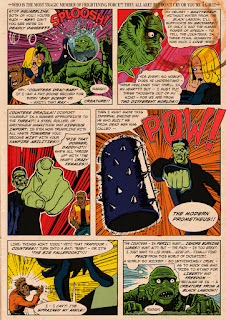 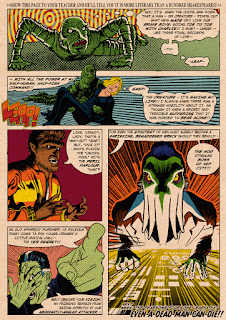 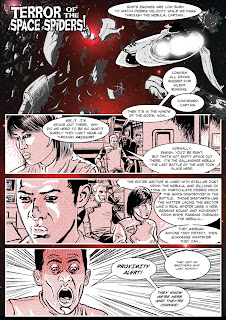 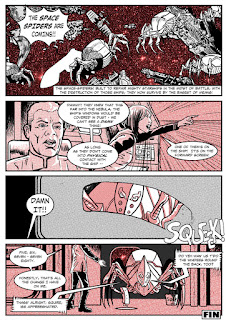 The more I look at you, the angrier I get that you don't have a beard 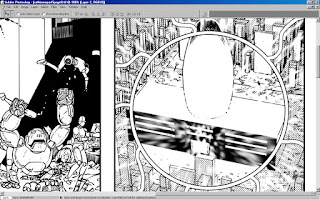 The usual hit and run post on a monday before I hit the sack, and I'm just squeezing out the last couple of panels of Rathbone before doing a final pass over the pages for edits to fix dodgy drawing, bad perspective, adding tones and so on.  Still not happy with the final pages, but I can admit there's some improvement since the last episode.

Checking Twitter feed from native US East Coasters and every new Twitpic and Instagram snapshot looks like a scene from The Day After Tomorrow, which is quite horrible as you can imagine - I wouldn't wish that film on anyone.
Thinking of you, folks.
Posted by Brigonos at 10/30/2012 02:07:00 am No comments:

It's always sad when anyone explodes 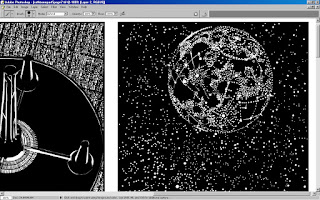 Just two more pages of sci-fi robots to get in the bag and then I get to draw Judge Dredd fighting a bear - because it's important to have life goals.
Posted by Brigonos at 10/22/2012 10:00:00 pm No comments:

Tonight is about one man's functioning penis 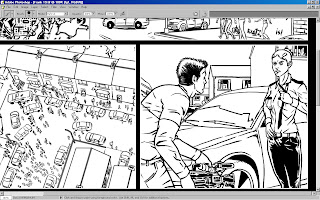 Some more whoring for the GN, as Babble gets what I classify as a "good review" at Comics Anonymous seeing as it entails the reader not having been sickened and angered to his core by our presumption, and also an interview with me and Lee over on Broken Frontier where, in a break with tradition, I come off like a complete twat.
Posted by Brigonos at 10/15/2012 11:54:00 pm No comments:

Can you believe that the zoo wouldn't let me borrow their white tiger? I'm gonna be sitting at the back of the party and Philip Seymour Hoffman is gonna be like "look at that idiot." 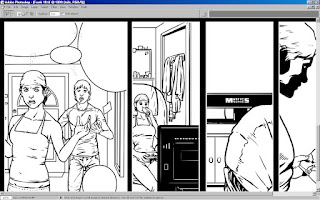 Hey ugly!  Yeah, you - who else am I gonna be talkin' to?  Judge Minty is showing at the Leeds Film Festival and Thought Bubble and is proof that Dredd fans don't know they're bloody born - you wait thirty-five years for a good Dredd movie and then two come along at once, though admittedly I'm biased when it comes to fanfilms, as I love them dearly.  It's so easy to snark from a distance, but to see all that effort to produce something even as horrid as The Death Of Batman is heartening stuff that reminds you that even a solitary pursuit like the reading of funnybooks is a shared passion. 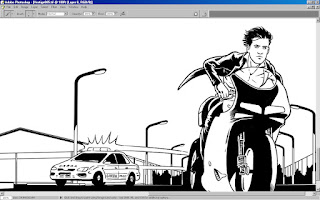 So Babble got a good review from possibly the best-named website on the internet, and I am pretty chuffed about that - until the reviews from other websites come in to give it a kicking, at least.  If you fancy pre-ordering it, just give your retailer the Previews order code OCT120971 and they'll let you have a copy when the book hits in December.  Just don't ask them how much they're charging you for it because I can't believe it either.  It's worse for the US price, or at least it looks worse because there's a seven and some nines in there, but that's US currency which is basically as worthless as Monopoly money so I don't feel quite so bad about it.
Posted by Brigonos at 10/01/2012 11:23:00 pm No comments: