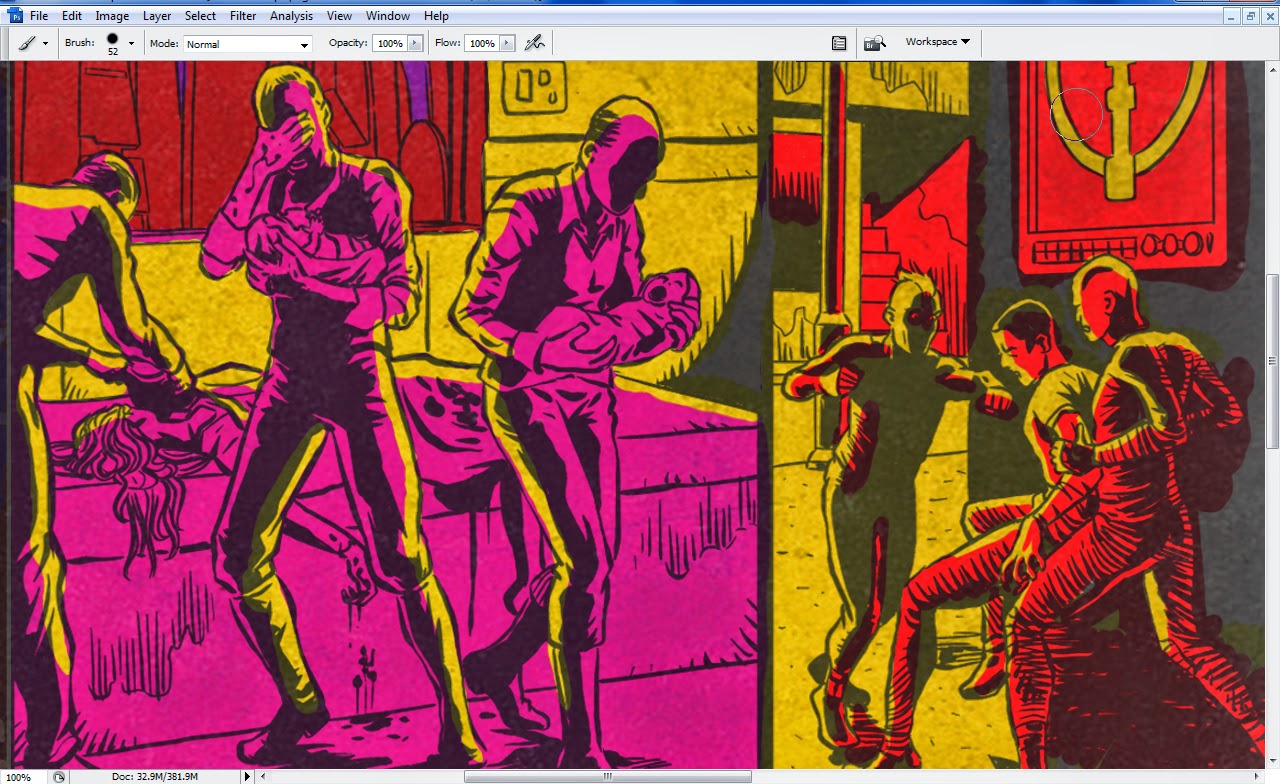 Yes, still scanning.  I have discovered a loophole in the law that will allow me to sell these old comics online so that I can enjoy the frustration and despair of the digital comics seller firsthand instead of just reading about it in suicide notes.
Posted by Brigonos at 4/16/2015 12:40:00 am No comments:

It's like our anniversary lunch at Hooters all over again 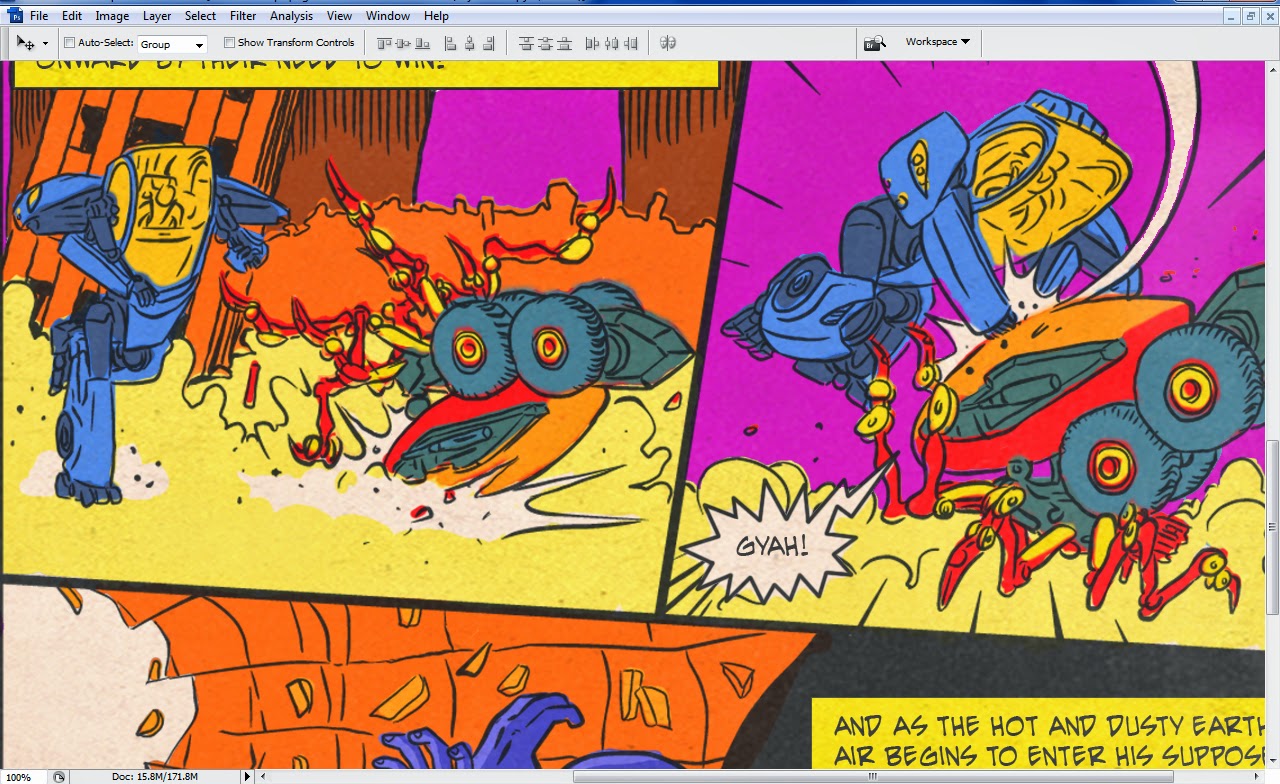 Don't mind me, I'm just... erm... cleaning up some old 1980s comics I scanned.  Yes.
Watching Marvel's Daredevil, and bearing in mind the forced and unnatural scripting of its nearest competition - The Flash and Arrow - and gosh but they sure make that whole "doing a decent superhero tv show without looking like we're ashamed of doing a superhero tv show" thing look easy.
I never really had a problem with the Affleck movie like many others did - I found it to be a perfectly serviceable and entertaining action flick - but I did think it suffered from an uneven tone and mixed direction, with the NYC depicted coming off in much the same way the city did in the 1990s Ninja Turtles movies.  By comparison, the small-screen version of Daredevil is consistent in its tone, takes itself seriously to the point that there are episodes where people just stand around crying for no discernible reason, action scenes happen with minimum shakycam so you can actually tell what's going on, and rehashing of a lot of The Wire's schtick certainly helps distract from some of Daredevil's more predictable beats, though it generally avoids most of the usual traps of superheroes on tv.
I think I could have done with more character meat, a less brown costume, and a final fight that didn't go on forever, and the Kingpin is a bit rubbish, too, being very similar to the sheriff from noted tv car-crash Under The Dome, but I can see people going "oohhh daddy issues so he has depth" and liking him for that, but I'm kind of sick of that kind of villainy and would have preferred to see the version of the character that Kingpin sees himself as: a righteous man with good intentions who gradually became a monster in pursuing admirable goals - he even quotes some Biblical parables alongside the usual plastic Catholicism that plagues both televisual drama and the Daredevil comics, so there was potential for that to happen.
As it is, Vincint D'Onofrio handles the material well, and Charlie Cox as Matt Murdoch/Daredevil does a blubbery-lipped emo-hero just dandy.  The action scenes - while very good - sometimes betray that they're only there for their gimmick value, with an overlong "homage" to the infamous corridor fight in Park Chan-wook's Oldboy (I am crediting the Daredevil production staff with not being so culturally thick-eared that they're homage-ing the dreadful Spike Lee remake) being a particularly glaring offender in that it contributes nothing to the episode's story and feels tacked-on.
Still, there are worse problems for a superhero tv show to have than for the punch-ups to be a distraction from the story.
Posted by Brigonos at 4/14/2015 11:19:00 pm No comments:

Chapter 19 and its attendant problems may also be viewed HERE with some word beans coming out of  faces and explaining what's supposed to be happening in case the visuals don't quite do the job.
I quite like this strip, actually, as Dredd almost looks the same from one panel to the next.  Inking, though?  All over the place.  I tried to use solid blacks sparingly on Dredd to emphasise him as being visually different from the Dredd imposter, and he only got inked with solid blacks when he was the only Dredd in the panel and/or when being angry badass Dredd, but I don't think it really came off in the end.  That last panel was originally just Dredd's chin jutting down from the top of the panel, but it looked stupid so I agreed to change it.
And so to the end of the Daily Dredd adventure.  Of the 60 panels drawn in this strip, I was happy with 18 of them.
Posted by Brigonos at 4/03/2015 06:43:00 pm 1 comment:

Science is my pie

Chapter 17 may be read HERE, though Dredd's hand is still wonky in the lettered version.
You will note that I struggle so much at drawing in the space available that things often pop out of panels, and that I continue to try drawing things in triangle-y ways.

Labels: Dredd, Give us this day our Daily Dredd, raw artwork

As we're very near the 32nd anniversary of the publication of the first issue of Marvel UK's War Cars, I thought I'd dig out my old issues to see if they were as bloody terrible as I remembered - oh sorry, anniversaries are supposed to be celebratory, aren't they?  Well when you're anniversarying a 32 year-old UK comic based on toys that in the end were never released outside Asia, maybe that just isn't possible, The Internet.
Although to be entirely fair, it's not without some positive attributes - the paper stock is not as bad as I thought it would be, and the staples are still intact after all these years. 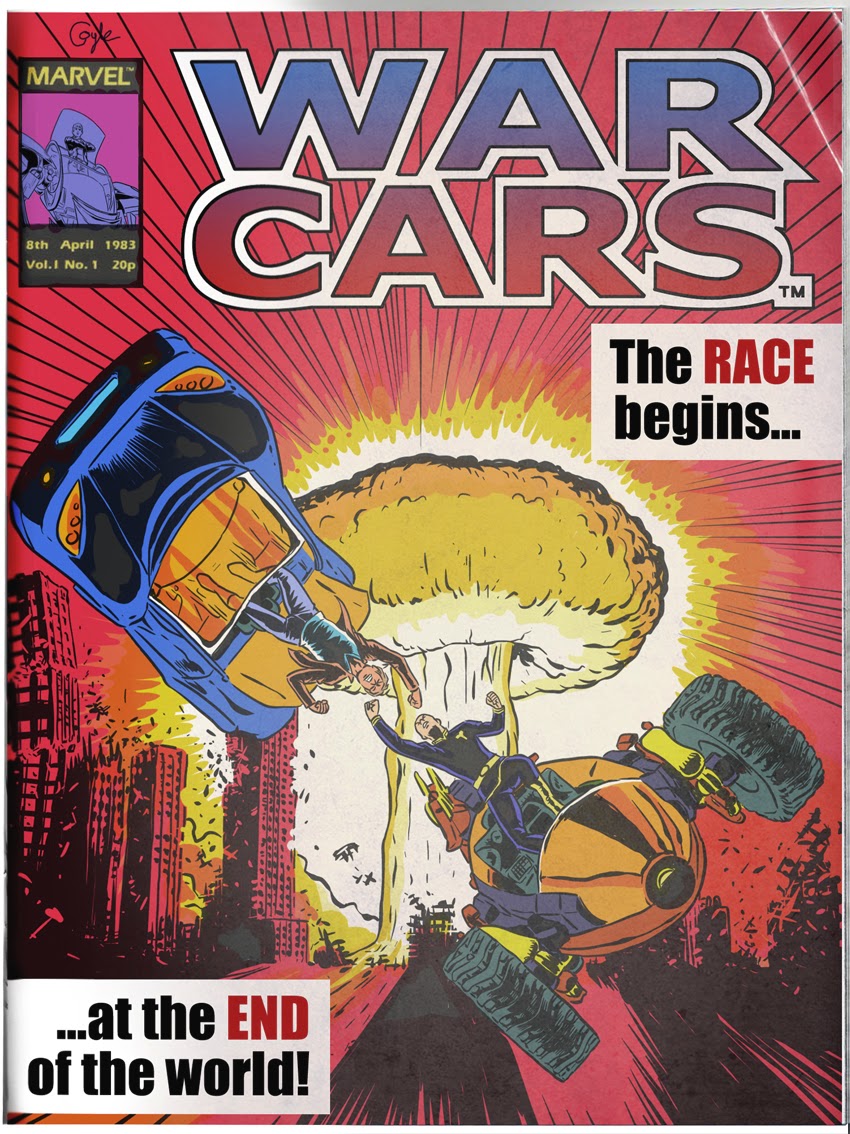 The toys themselves had no background mythology or context for any supposed conflict or tension that would force the blue team (sports cars that transformed into robots) and the red team (dune buggies that transformed into spiders) to fight each other, so the holes had to be filled in by Marvel editorial staff and writers on the fly, who apparantly took some box art of the teams racing against a background of a nuclear explosion literally and made the story about a series of races across a post-apocalyptic Earth, so it's like Hunger Games, if Hunger Games had Transformers in it and was also Death Race. 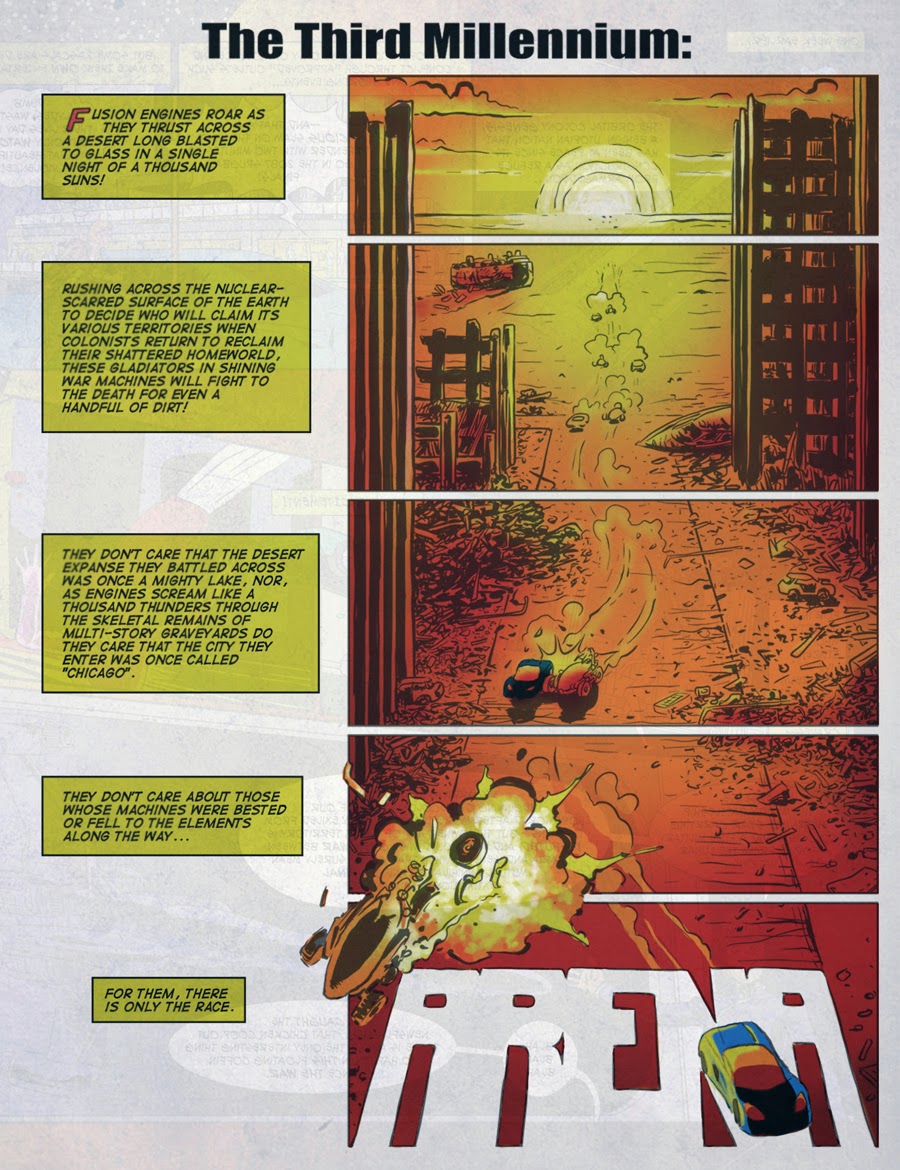 It may surprise you to learn that there's not very much on the internet about a comic from three decades ago that no-one bought or gave a poop about, but apparently the franchise was originally called Car Wars to cash in on the cultural cache of the Star Wars name.  It was quickly retitled War Cars, however, to avoid the litigation that nearly befell the theatrically-released pilot of Battlestar Galactica (which all good nerds will know was originally called "Star Worlds" before hastily having "Saga of" added to the title to foil Lucas' vicious legal department), though the change came too late for the UK manufacturers of the toys, who had the name emblazoned on everything from box art to sticker albums, all of which had to be dumped in an English coalmine by Stadium UK, the licence-holder for the toys in the western market who went bankrupt shortly after, leaving Marvel to sell a comic based on toys no-one had heard of and most likely never would.  The villains being referred to as "reds" (in reference to the colour of their vehicles) was not unnoticed by then-popular communist Arthur Scargill (if you're under 30 and reading this, he was sort of the Russell Brand of his day), and - on top of a coalmine being closed down specifically to be used as landfill space for the toys - was taken as evidence of a campaign against trade unions, prompting him to denounce the comic in a newsletter that caused the book to be boycotted by working class families across the UK, leading to the only moment in popular culture when War Cars actually entered the mainstream, after Ben Elton made a joke that more copies of the comic were burned in the street by angry adults than were bought by joyful children. 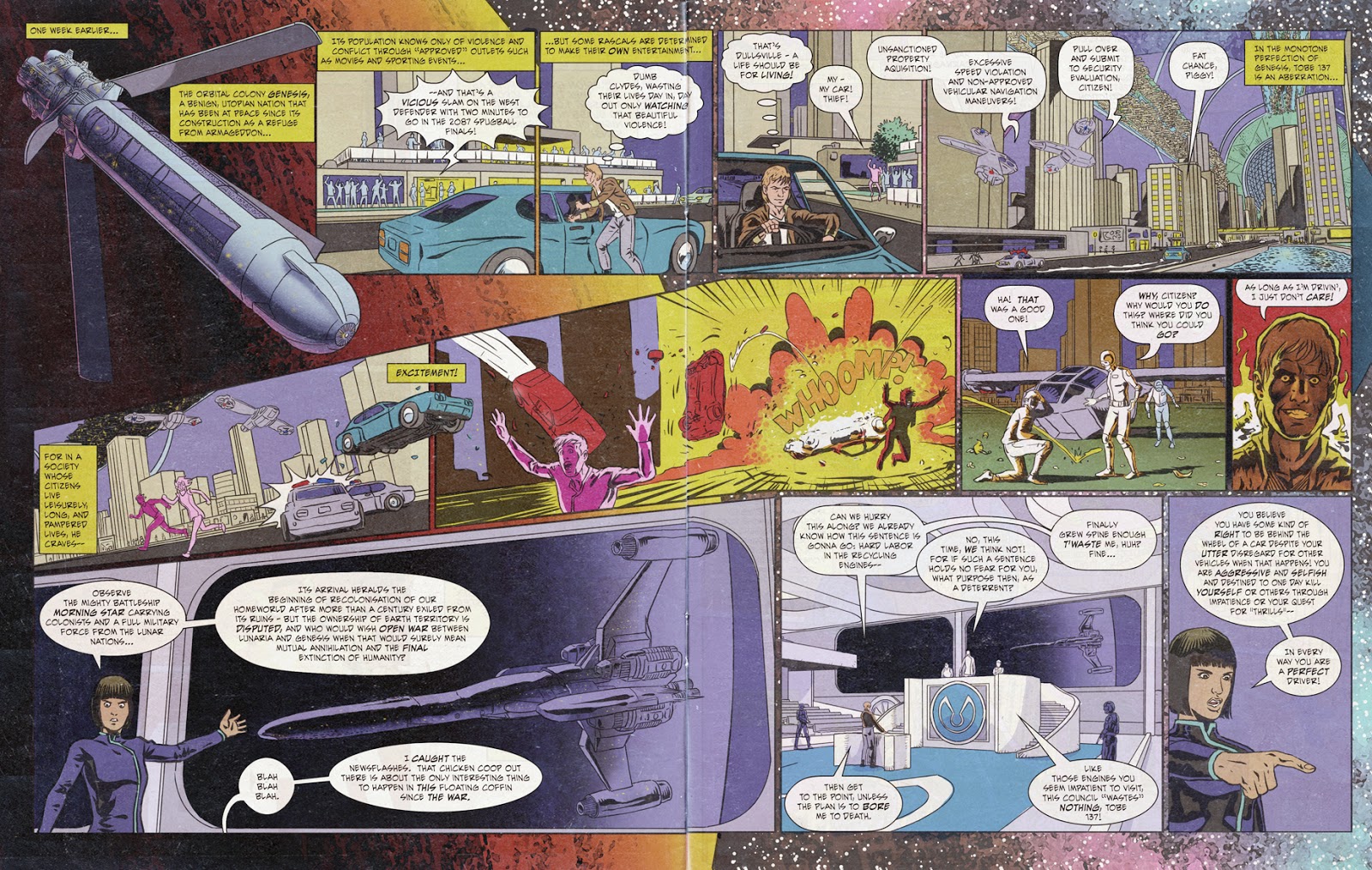 To put it mildly, War Cars was not a hit, and copies of the comic are so rare that they often go for stupid prices on eBay.  Seriously - 32 pounds for this?  The effing thing's got dog ears and someone's already done the word search and maze puzzles, not to mention some kid's coloured-in the illustrations for the text story. 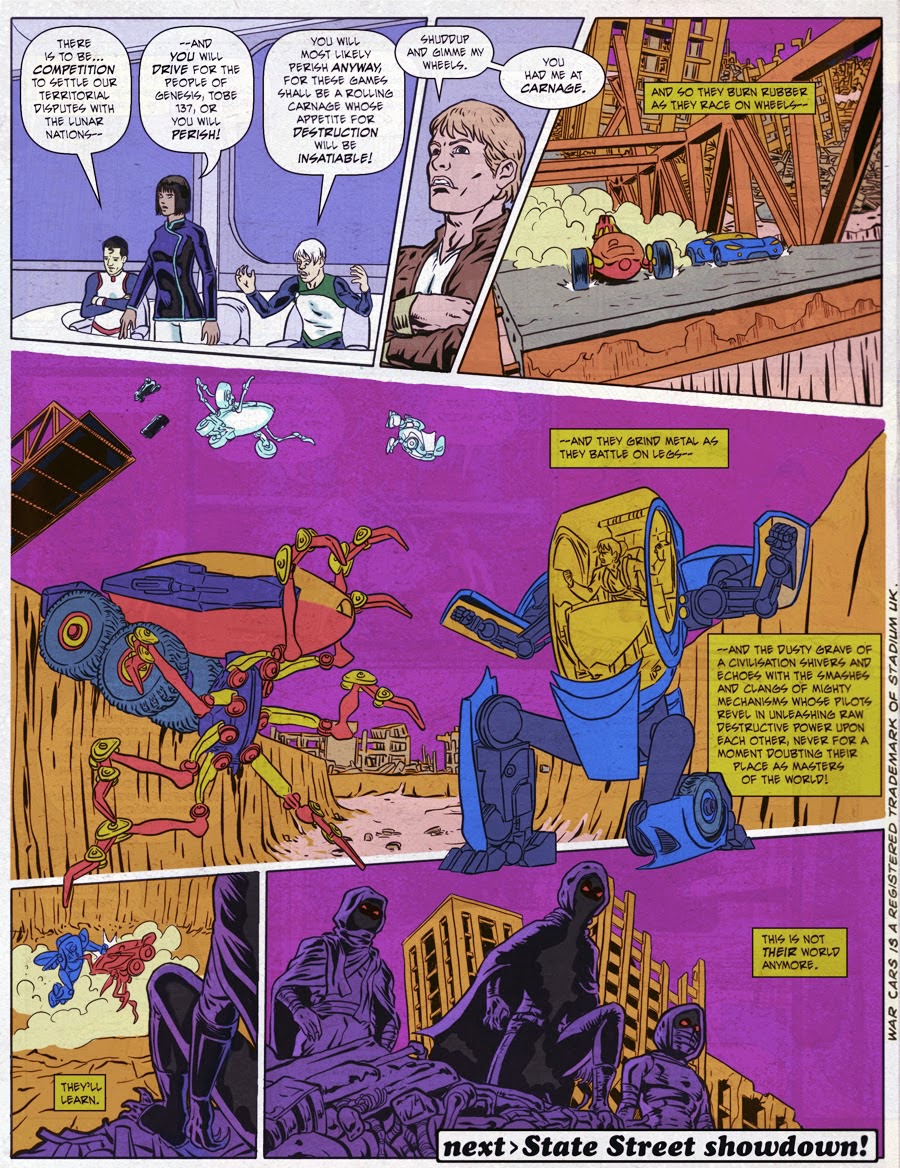 Scanned from a copy described on eBay as "near mint condition" - MY ASS - this is the first episode of the strip as it appeared in the comic, not just a whopping 4 pages of original content exclusive to the UK market, but in colour, too, so Marvel UK were clearly planning on War Cars being a major title to have made this much effort.  The reprint material typical of the time that pads out the rest of the book is stuff like Killraven and an adaptation of Planet of the Apes by European writer/artist Ernő Zórád - that was probably reprinted dozens of times in the English market by that point - which keeps the post-apocalyptic theme going, alongside overly-aggressive editorial input from the (presumably fictional) "Sargent Wheels", who despised "the reds" and seemed to be some kind of talking scooter, just in case you ever forgot it was the 1980s.
I'll see if I can dig out some more issues to scan in later blog posts, as I am pretty sure I have at the very least got all the episodes of the first story arc to hand.  I imagine it's something we can all look forward to.
Posted by Brigonos at 4/01/2015 12:58:00 am 2 comments: