Nothing much happens on a sunday. Despite my connection with catholicism - monotheism especially - being a long-dead habit, I still enjoy lazy sundays coloured with a hungover beery haze - or stouty haze as is the case today, given last night saw one of my periodic bouts with the black stuff. I took the opportunity to try cycling for the first time in over a year, looked after my sister's kids for a while, then found myself colouring in a Power Pack fanstrip. 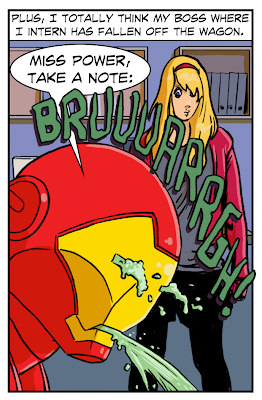 I would comment on the Tyrone win over Armagh, but I feel it would be a disservice to a generation of Northern Irishmen who follow a game that's not real football and never will be to pretend I have the first bloody clue what that game is even about. I saw like a dozen handballs in the firt half alone and the ref just lets it slide.
Amateur hour.
It was pretty damn hot today, too. Great to see the weather finally turn, but it means I'll have to make pipe-dream plans to do something significant with my summer again. Well, actually, what I normally do is think about making pipe-dream plans, then decide I'm definitely going to do something, then summer's over, I'm broke, and quite possibly horribly hungover to boot.
But this year? Things are going to be different, etcetera...
Posted by Brigonos at 5/31/2009 09:58:00 pm No comments:

Confusingly, my 13 year-old nephew likes the film, which I thought about for a minute in order that the confusion might disperse, and then sort of twigged: 13 year-old boy. Ah.
Personally my only concern as regards Ms Cyrus center on my observation that she could do with eating a pie or two, and has what I personally consider to be a husky voice not just for a non-smoker, but for a grown man. Nice set of pipes when singing, though - regardless of musical genre or the relative merits of individual songs, I'm a sucker for anyone with a good vocal range.
I could try a blow-by-blow plot summary, but I'm not going to. It was quite inoffensive, featured the prerequisite greedy property developer vs American smalltown values plotline, sleazy journalist plotline which inexplicably goes walkabout halfway through despite an early heavy push, the ending song was appropriately rousing and shoehorned in, and I've sat through worse in the name of babysitting.
That's right, bitches - I'm talking Pokemon movies.

I dunno - maybe later generations will venerate this kind of thing as something other than pop-cultural jetsam of a civilisation on the verge of yet another period of recreation or deconstruction, in much the same way we now view the likes of Red Dawn and the Goonies as snapshots of an age rather than something that's old and shit.

Labels: cultural flotsam, hannah montana, miley cyrus, portents of the end of civilisation as we know it

Friday night and stuck indoors, I find myself alarmingly happy to watch Martin Clunes' Reggie Perrin redux for the creatively bankrupt BBC. It's not the greatest thing in the world, but it is at least entertaining if, like me, you've not memorised the Leonard Rossiter original as a great many seem to have done.
So little else on television at the moment what with the many season finales having aired in the US (24, Heroes, Monk, House...), I suppose I have to settle for what's there, but Clunes is inoffensive from where I'm sitting and the jokes work fine, bar the occasional fantasy sequences that are the weakest part of the show for me.
Posted by Brigonos at 5/29/2009 11:50:00 pm No comments: 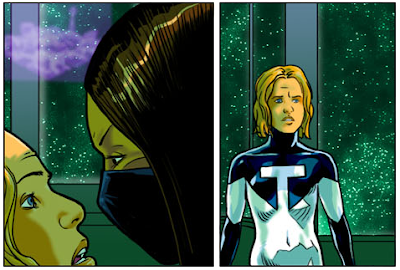 Erm... nowt much going on. Coloured a bit, hilarious dealings with the local post office and social services, but otherwise lazytown as usual.
Posted by Brigonos at 5/28/2009 11:36:00 pm No comments:

The slow march of progress... 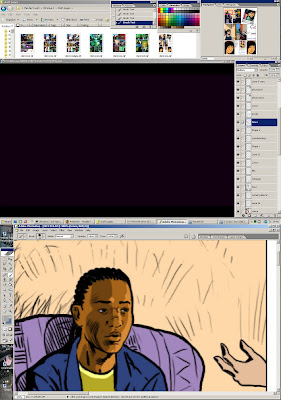 Lazy day today. Not much done in terms of creative output, as for some reason I ended up finishing off the colouring on some pages from Turbo Katie, a deliberately generic superhero comic I took to drawing a year or so back to keep myself amused while I learned to draw worth a damn. There are some clumsy layouts and poor inking in evidence, but I suppose you at least know what you're looking at and can tell the characters apart. 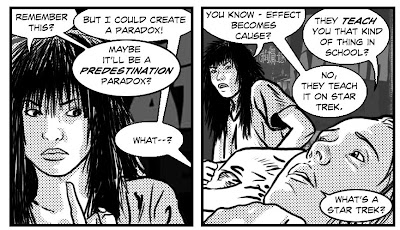 The art is variable from page to page, but it's good to see progression from then to now - I seriously didn't have a clue starting out how to write or draw a comic, but I'm slowly getting there with practice. My ethnic characters, at least, are finally looking less like racist caricatures, and to my mind that's a pretty big deal.
Posted by Brigonos at 5/27/2009 10:45:00 pm No comments: 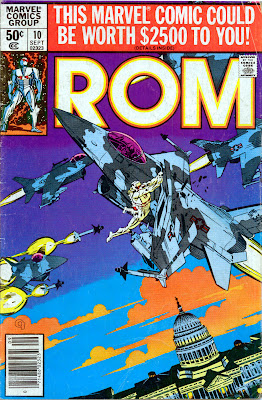 I never read ROM as a kid, primarily because there weren't a whole bunch of options as regards reading comics in 1980-1990s Northern Ireland, as generally we got glimpses of the broader Marvel line (or Marvel 'universe') through back-up strips appearing as filler in localised iterations of tie-in titles like Transformers, Star Wars, Action Force or Thundercats. Usually, these filler strips were chopped down from their native American-format of 22 pages per chapter to four 5-6 page chunks and printed after the title strip/strips (that were usually written by the likes of Dan Abnett or Simon Furman) based on toys or cartoon shows.
Through these bite-sized chunks I came to know the likes of Rocket Raccoon, Power Pack, and Iron Man 2020, and got occasional hints as to what were the 'big noises' in the broader Marvel U - everyone mentioned the X-Men (though I only knew them from an appearance in an episode of Spider-Man and his Amazing Friends), and Spidey was a given, but there were hints at stuff going on in unlikely-sounding titles like Alpha Flight, and editors' notes helpfully explained that I needed to have read something called 'Rom the Spaceknight', to understand what sequence of events unfolded to the point that the child heroes of Power Pack could visit the New York aquarium and see giant space-serpents hanging around in the tanks.
Anyway, life - by which I mean the discovery of the fibromuscular tube leading from the base of the uterus to the exterior of the female body - got in the way of comics and these things dropped out of my brain for a bit until I discovered the internet and its oddly-positive attitude to borderline illiteracy in the feline blogging community. While perusing the blogosphere surrounding comics, I came across a fondness for the adventures of Rom, whose bear-punching, hooker-frying, small-town-incinerating escapades had secured for him a place in the hearts of many, long after the death of his comic series in 1987. 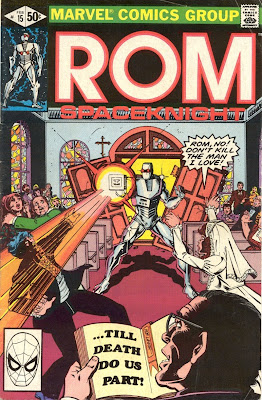 Written by Bill Mantlo and drawn by Sal Buscema, ROM was the tale of a cyborg spaceman battling shape-changing alien witches called the Dire Wraiths, and his adventures often involved him incinerating said extraterrestrial infiltrators while they were still in human form, giving him an in-universe reputation as an unstoppable alien serial-murderer. It was this wacky undercurrent - and the angular, anguished human faces of his victims twisted in agonised horror as he sent them from this plane with a blast from his Neutraliser - that sticks in the mind now his adventures can be enjoyed thanks to the actions of evil internet pirates who have scanned every issue and made them available to a generation otherwise unable to acquire reprints now that the rights have lapsed from Marvel's stable of licenced properties. 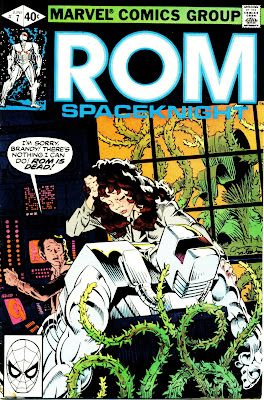 I'm currently reading my way through the original run, and so far it's got a lot more depth to it than a comic about a toy deserves, but then that was always a feature of Marvel's licenced titles, particularly the Transformers UK work of Simon Furman, which was deep enough that elements eventually found their way into the 2007 movie based on the toys, such as the Allspark/Creation Matrix McGuffin, an eons-spanning intergalactic war, and epileptic camerawork ruining perfectly good SFX shots with poor visual storytelling. 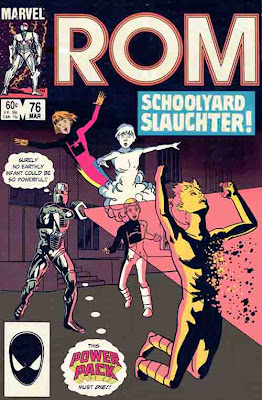 Rom has mittens, too - I don't know why, but this actually makes him more terrifying, as if the bear-punching, killer plant-wrestling, space-hopping, planet-busting, mutant-smashing, hooker-burning escapades weren't enough to make him super-awesome aplenty. I'm enjoying this unabashedly 1980s creation thoroughly thus far, and lament the lack of reprints of the series, however easily-acquired the scans of the book may be online. My one impression from it so far seems to be that while my memories of the 1980s were of a horrid decade, there were more than a few bright sparks in popular culture for children.

I'm not going to blog about blogging...

I'm going to do the blog thang and try to make sure something goes up each day, be it a review of something I love/hate, a sketch of one of my numerous comic characters I draw for a while before abandoning to thought-limbo, or maybe even some ill-advised philosophical musings 'pon the things that define us all. 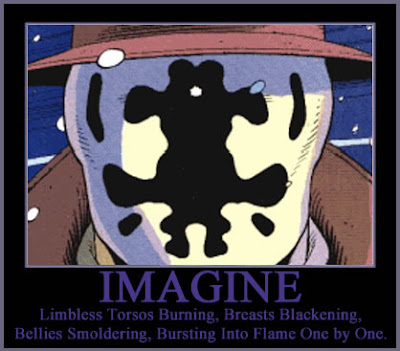