Sorry, miss - I was giving myself an oil job 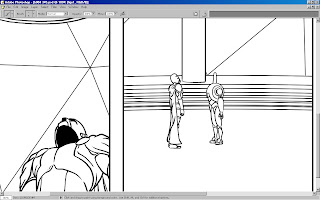 Unproductive day is unproductive.  But I did get to see Superman vs The Elite (terrible), The Magnificent Seven (okay), Planet of the Apes (class), and the season finale of Legend of Korra (that'll do, series), so yeah, I think I might have a notion why I did not have a productive day.
Posted by Brigonos at 6/27/2012 02:06:00 am No comments: 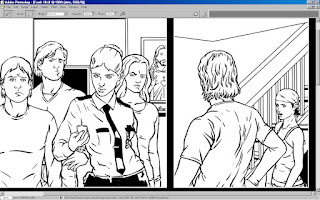 Watching Magnum for most of the day, but now I'll wash away the sour taste of that time I was drawing comics for all of five minutes with some beer...
Posted by Brigonos at 6/25/2012 10:53:00 pm No comments:

I can't afford lube, I just use my tears 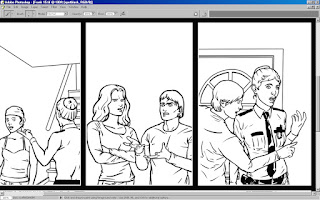 Obvious balloon space is obvious.
I am also now willing to admit that I am the only person who thought that the cover to Astonishing X-Men 50 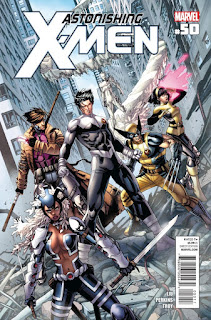 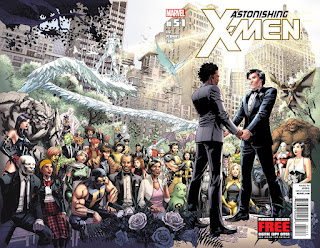 When you find yourself not impressed at all by the Kiss comic, it's best to remember them for what they're actually good at:

Get back here, you backwards hill-people - there is evidence in that shark! 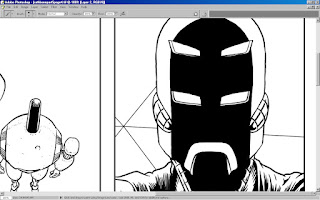 Didn't get much done today as I crawled out of the kipper at a disgraceful 2:30, the consequence of being actual proper unemployed now instead of just having a lot of free time in my afternoons, though I did manage some bad inking on a terrible design for a robot that I'm sadly locked into it as he appeared in a book that saw print about five years ago.
The first Dredd trailer hit today, and being an action movie snob - yes, there are such things -  I found it looked generic and more than a little dumb, but that's what all trailers look like these days so there's no point slagging it this early, especially since there's a glimpse of the odd bit of potential even if "this future-drug makes things happen IN SLOW MOTION" is just begging to be laughed at in its stupid ten-years-too-late-to-be-satire face.

Although it's worth saying that the Hall Of Justice looks like some sort of rad nightclub.

You know what we should do? We should enrol you in some man classes. 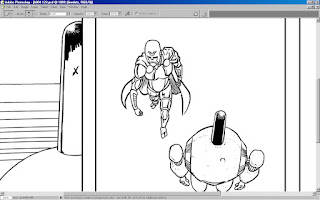 Just a quick post to meet the daily obligations.  I am currently watching Aliens and the downstairs flat is apparently getting a goat to cut the grass out back, and I do not mean a person who is derogatorily referred to as a goat who will use tools and utensils to trim the foliage, I mean an actual mammalian bovidae who will eat it with his actual goat teeth, because when you are a guy fixin' up a flat with no roofing, flooring, working electrics, ventilation, and which has been declared unfit for human habitation on two separate occasions, what you really need to top things off  in the eyes of your upstairs neighbors is a quadruped of the capra genus running around and shitting on everything because the last time you went into the back yard you somehow managed to smash all the gates into tiny gate pieces.
I think the downstairs landlord is an idiot, is what I am saying.
Or perhaps a genius.  I just realise now that "unfit for human habitation" does not apply to goats.  Of course, goats can't pay rent - or can they?  I'm so confused now...
John Cena is a man with many words on his resume: actor, singer, rapper, comedian, wrestler - unfortunately they all come right after the word "failed", though I have a soft spot for Bad Man, the video starring as it does the late Gary Coleman, who once starred in Buck Rogers in the 25th Century telling a space villain not to be "laying any of that Doctor Doom jive," and that is good enough for me.

The better one feels about one's self, the better the rest of the world looks 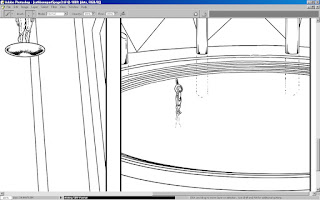 Placeholder post, as I'm just trying to get back into a daily posting routine so as to make myself actually work during the day rather than just amble about until chores or babysitting someone or other presents itself as a distraction.  Mostly I am listening to podcasts about film-making and Bee Gees.  Go on, no-one's looking - you know you want to:

If you don't jump on top of this, I'm breaking out my birthday money and making it rain 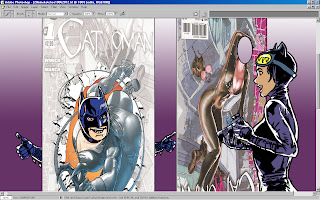 Now I remember why I hate drawing Batman.

Nowt much doing at the moment.  Been on a detective tv show binge as I burn my way through Magnum PI's fifth season, Psych (which I am convinced has been carbon-copied by the BBC's Sherlock), Longmire, some episodes of Dirk Gently that had been languishing on my PS3 awaiting my clearing them off so I could install Lollipop Chainsaw, and Australia's Miss Fisher's Murder Mysteries, which is an adaptation of the novel series and a timely reminder why we have internet piracy.
The latter is a pretty decent adaptation of the novels, though it's been years since I've read Cocaine Blues so I'm not sure if main character Phryne was always quite so Sue-ish, but her Great War backstory remains largely intact, which I thought brave as it ultimately paints her in a less flattering light down the line if they follow through with showing all of it, particularly her PTSD years in Paris.  Worth a gander if you like your period detective yarns with a bit of sexual enlightenment, but if not it's a gun-toting flapper in 1930s Australia solving murders and shagging anything that moves, what's not to like about that premise?
Posted by Brigonos at 6/19/2012 12:37:00 am No comments:

I wouldn't wish that on a broke dick dog 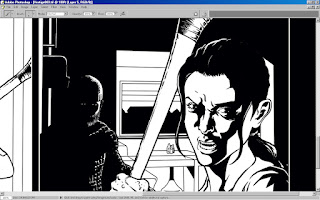 Holy crap, Predator is 25 years old!
This makes me feel old - until I remember I was too young to have been watching it when it came out and have stuff to do right now rather than bitch about the good old days and wasted opportunities in my life or whatever - if I wanted to wallow in that kind of thing, I would read my nephew's Facebook account where he laments the bygone days of biology class "with the old gang" before he had to choose between that and physics.  His younger sister makes similar rumblings now and then, too, making me wonder when nostalgia became such an infectious meme rather than just the thin basis for most of Seth McFarlane's output.
Ach!  To bed, I think! 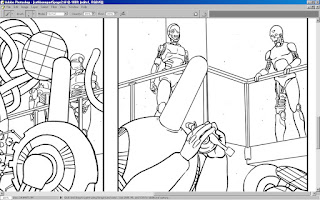 I sometimes wonder why so many perfectly sensible comics fans are so hostile towards the superhero genre, home as it is to stories of pure id and social and political commentary dressed up in stretchy leggings, the superhero genre being an especially accommodating one as within it can be told detective stories, stories about alien invaders, stories about witches, stories about talking frogs, and those stories can happen anywhere from the wild west to the planet Mars, while other genres centering on war, mafia criminality, hardboiled detectives, pirates or cowboys don't so easily allow other elements of the fantastic to invade the often narrow and stereotypical confines of their genre without being seen as outings into the territory of the camp and deliberately outrageous mash-up.
I love me some superhero nonsense, is what I'm saying, so it saddens me when when those who make superhero comics for a living insist with increasingly defensive and dismissive volume that I should go and do something else instead of reading superhero comics.
Well, mission accomplished, despite my enjoyment of the odd trade, Ultimate floppy, videogame, cartoon series and movie, I think it best that myself and Spider-Man go our separate ways, which is probably just as well because Ultimate Spider-Man - the latest cartoon Marvel is trumpeting as the second coming - is the kind of cloyingly terrible shit that I thought western animation had got past years ago, and I'm surprised that such experienced hands as Paul Dini's are involved in it, though they likely had to get him on board to defuse criticisms of ripping off Batman: Brave and the Bold's more successful trappings.  As it is, the scattershot cutaways and fourth wall breaking comes off as Family Guy without the racism, and if you've seen Family Guy in the last five years you'll know that basically means Family Guy without the "punchlines", or Seth McFarlane's uncanny ability to tap into the knowledge and experiences of his working-class audience with sketches about dining in Japan and troubles with the housemaid.  After the all-ages Spectacular Spider-Man's rather good take on the material, this step back to exclusively child-oriented storytelling is a disappointment, especially when it comes with lengthy scenes where the main character has a whacky adventure with whatever toy they're now selling in stores (be it a motorcycle - because Spider-Man certainly needs one of those - or a flashing web-shooter ).  It's also committed to immediately building Spider-Man into a larger world of Marvel IPs, and this distracts things further from having any kind of empathy with the character because our investment is supposed to be in Spidey as part of a team, yet the team is a bunch of stereotypical 1-dimensional cyphers, though I do like that Luke Cage's costume is essentially a skintight farmhand's outfit - because it is 2012, that's why.
Maybe Steve Wacker - and through him Marvel - is correct in saying that superhero audiences shouldn't expect anything more than trash aimed at pushing whatever sweatshop-produced tat Disney wants flying off the shelves this month and it's time I moved on or lowered my standards and expectations, but it sort of sucks that this is the stance of creators more than twenty years after Watchmen, Animal Man and Marvelman came out.  Maybe it really is time I moved on to something else... or maybe it's time I just took my money and started rewarding those creators of superhero tales who are willing to try harder.
Posted by Brigonos at 6/05/2012 02:35:00 am No comments: