Over time, your quickness with a cocky rejoinder must have gotten you many punches in the face 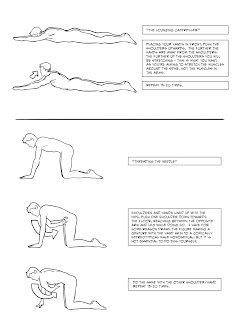 Apologies for the self-indulgence, but I thought I'd post a rough diagram I ran up of my exercise regimen for dealing with my RSI, as I didn't find much help online and this had to come to me via my physiotherapist, so far improving - if not entirely dispensing with - my arm/hand pains a lot, so I thought I'd bung them up here in case they might help anyone doing a Google search or something.  Or at least, they might help someone if they check through the first few million search results to get here, and I'd add that if at all possible, avoid using a mouse or computer keyboard as this generates the micro-muscular movements that create and sustain the condition.  Remote controls and game controllers are also worth avoiding where possible.
The exercises are done a few times a day, usually to break up any long periods of work.


Dag-nabbit if they didn't cancel Harry's Law on me, one of my few must-watch trashy telly shows alongside the compellingly-awful Revenge, although to be honest it was getting unbearably preachy for the last few outings and had at least one episode where black people preached at whitey about the racism for at least five minutes at a time so maybe it's a mercy killing at this stage.  Fun while it lasted, Kathy Bates really stepped up to end on an emotional note that came not so much from a rubbish b-plot about a dead ex-husband and more from a great rendition of Tom Waits/Crystal Gayle's Take Me Home, which I can't link to as Youtube is being as unreliable as ever by not hosting a clip of the KB cover, so here's the Tom Waits version - well worth two minutes of your time:


It seems deeply flippant to mention in the same breath I do the end of a television series the passing of Robin Gibb, but I mean no disrespect in doing so, I just felt it worth mentioning because of the sheer amount of Big Noise joy that can still be instilled from hearing For Whom The Bell Tolls, a latter-career outing for the Bee Gees and much overlooked in favor of their more iconic cheesefests from the mid-70s, which are deservedly enduring monsters of the disco era, but aren't possessed of the same level of nostalgia for this infrequent blogger, even though at the time For Whom The Bell Tolls actually came out I was more interested in angst-rock and - because it was the 1990s - .music that went UNTZ UNTZ UNTZ UNTZ while balls were tripped mightily through many a field and country road, cars being more a conveyance for obnoxiously overpowered sound systems than they were shaggin wagons.  It was a bonkers time, the 1990s, generally seen as the era of music scenes made up by music journalists - like Grunge and Britpop - to convince themselves they were still relevant, but there was some fantastic pop music coming out, too, even if I didn't see past RATM and Radiohead at the time.

I've got to admit, when you were punching that dead guy in the stomach, that was a serious balloon move. 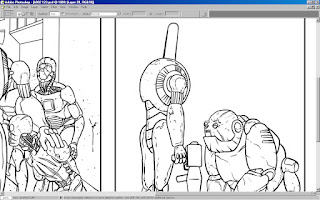 Drawing (or trying to draw) clunky robots at the moment, as I go through a barmy phase of delivering what I promise to people.  An insane way to live - I don't recommend it to anyone, you end up with very little time for GCB marathons.
I've also watched the second half of the current season of the terrible 90210 and come to the conclusion that just as certainly as I and many others - teen girls and gay men, mainly - watch it ironically, it is also now being made ironically.  Those involved have no plans for the immediate future so they figure they'll just keep making this, is how I see their production meetings playing out.  You probably should not watch 90210.

Also watched Deadwood's first season... not sure what all the praise is about.  Seems an average western drama with lots of swearing to distract from that, though it's fun spotting who went on to other must-watch telly like Sons Of Anarchy and Treme.
Posted by Brigonos at 5/22/2012 07:12:00 pm 2 comments: