I need you to know that I've changed. I have spent some time in therapy and I have worked on myself. 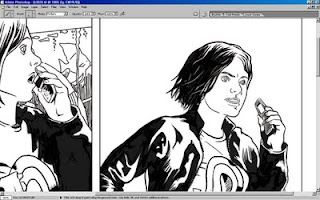 Labels: Babble, just checking in with the blog, screen grabs

Let's not learn how to do anything, let's just sit and contemplate the glory of me in all my complexities

Oh Vista - whatever my hands have, I suspect they got it from you. I'll be upfront and admit that this animated gif made from various screen grabs taken over one day is only amusing if you have Eric Pryde's 'Call On Me' in your mind while viewing it. Ah, Old Memes... 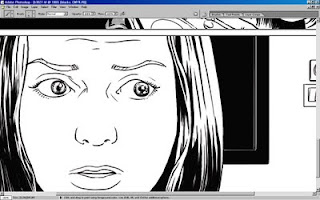 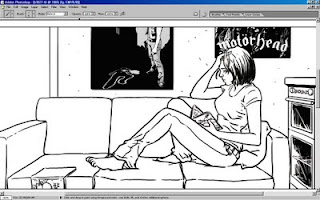 "The pain of the artist", I can assure you, is an all too real thing where RSI is concerned. Just holding the pencil is painful, I don't even need to be doing anything with it. I wouldn't mind so much if I was actually successful at what I do, but I am not, so if I stop drawing it inconveniences nobody - I have to continue drawing to inconvenience people by flooding their inboxes with news on blog updates that turn out to be screen grabs of something random and me waffling about something daft, like the woman in the Job Center telling me it must be great to be catholic because "you don't dress up for Church, you can just go looking like whatever but we have to dress up for it" (the only objection I can remember making about this was pointing out that Catholics don't call it Church, we call it Chapel) and it seems I've fulfilled my waffle quotient for this post already with that gem. The blog's gain is Twitter's loss.
The holiday's over, at any rate - time to get back to working and posting...
Posted by Brigonos at 6/22/2011 02:25:00 pm No comments:

It was while watching Footloose that I first realised that I was out of step with popular opinion as regards big movies, as I was on John Lithgow's side. I mean he pretty much goes apeshit when he sees a book-burning and turns on his conservative peers all like "Man what the fuck you doing?" and starts on the road to changing his mind about some stuff he got wrong. He's a decent guy, and that movie is much better if you go in thinking it's pretty much about him and not the douchey Kevin Bacon character who goes through the whole film telling people what to do and learning fuck all.
Anyway, I found myself not getting on with X-Men First Class because it seems to be a movie about a rich old-money white guy who's never worked a day in his life meeting a death camp survivor and telling him to get over it for two hours. Seriously, the first view we have of Charles Xavier is one of privilege, of him insulated from the war that grips the rest of the world and reduces America to rationing and Erik Lensherr to the subhuman status of eugenics experimentation subject in Auschwitz, and Charles has figured out that the woman in his kitchen is not his mother because - and I swear I am not making this up - she wouldn't bring him hot chocolate, she would have his servant do it. For the rest of the film, Charles makes a point of telling grown adults - most of which are working class, I notice - to hide what makes them different and not make waves and this is the problem with the film for me - it assumes Charles Xavier is in the right despite his glaring moral conservatism born of a lack of worldly experience that feeds the status quo rather than helps society evolve. He's no role model, using his parents' wealth to live a life of luxury and gain a university education with Raven draped across his arm like an ornament, all the while using his own powers to help him pick up women in bars (rohypnol not being invented yet as the film is a period piece), and then... well, to be blunt, then he starts telling a Nazi hunter that maybe he should let it go already. He looks a death camp survivor in the eye and tells him that he's wrong to want revenge on Kevin Bacon's Nazi eugenics scientist who is now attempting genocide once again. This is a movie where the good guy is someone saying someone is wrong to kill Super Hitler even though the film actually paints its protagonists into a corner and makes it clear that the character's death is the only thing that will stop him exploding and causing nuclear war.
The text of the film is disastrously muddled, with Erik accidentally causing Charles to be injured and immediately becoming repentant for his actions now that he's seen they have consequences, yet Charles doesn't forgive him even though throughout the entire film he's been telling Erik to let go and move on and somehow even though this inability to forgive births Magneto, Charles is once again in the right. To recap: X-Men: First Class is a film about a wealthy white conservative who is stabbed in the back by a bitter jew - an immigrant, no less - who doesn't know his place.
Oh, and the only black female member of the team is a stripper, who also betrays the team first chance she gets - was this movie written by middle class white people? I can't really tell...

Green Lantern was shit, too, but for entirely different reasons. I'm not what I would describe as a Ryan Renolds hater or fan, but he really needed some funny lines and to be doing his typical schtick in this. He doesn't, so what's already a mess is now a charmless mess. Meh.
Dropping some Frank on y'all... 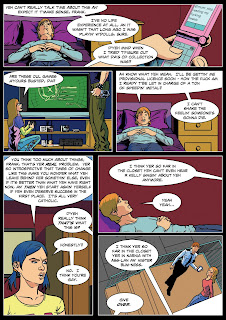 Got some major problems on this page as I'm only now getting back to trying to draw, but what jumped out at me was the huge hands when I try perspective in that first panel. They look huge like you see in them Mike Deodato comics. Then I fucked that perspective up in the last panel. Plot wise I'm really regretting the decision to not bring in the characters' circle of friends until later - it does focus the plot, but gives me no room to do much of anything in terms of building character.

I will forgo the rest of the decorations, they might seem a bit pretentious. And I believe I will wear the cape.

It is pissing over here. You know when that fruitloop was banging on about the end of the world a couple of weeks back? It was pissing on the day he called as Rapture, and I thought the rain was pretty biblical and appropriate - not to the point I believed him or anything, on account of him and his Rapture shite being johnny-come-lately stuff that sounds like a child came up with it. I mean, someone really should have been a mate to the guy and pointed out that basing all his maths on what people assume was the exact date of that Noah's Ark thing that didn't actually ever happen was possibly not a good idea. Mind you, he got through the last end of the world he predicted, so I imagine he'll be fine. Rich, white, conservative, and fine.
Posting a bit late, but please bear with me... 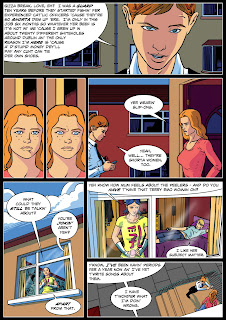 Well this page didn't go into the shape I wanted it - you know, unlike all the other pages which were concisely worded, tightly focused, and advanced the plot. This is a halfway mark of sorts, and I think I've introduced the vague theme of lies and ennui in a small town where - I think I am being fair here - the only notable feature is the option to drive straight through it on the way to somewhere else without ever having to turn a corner. The idea is that all the principle cast are introduced within the first twenty-two pages and that this will make a 'chapter' of sorts so I can stop pretending there's anything linear about what I want to do and instead switch to time-hopping vignettes like comics machine and 2000ad regular Bob Byrne manages to do each week without his wrists knackering themselves, the jammy fucker. My only solace is that Byrne is a southerner and thus destitution is his constant companion, though it's small comfort as he lives in Spain now and doesn't even need a roof on his cardboard box because of all the sun. God, I remember sun...
Posted by Brigonos at 6/08/2011 10:42:00 pm No comments:

Labels: Frank, p11, The Man By The River, waffle

Don't you humans ever get done eating? Organic scum - gotta watch them every minute.

Difficult to post ongoing work when I'm on the last chapter of a story and don't want to give anything away, so instead of a screen grab of what I'm working on or Vista freezing up again - let's face it, the chance of seeing either of those is fifty/fifty - here's a gif of Buck Rogers roundhousing the fuck out of a space Nazi.