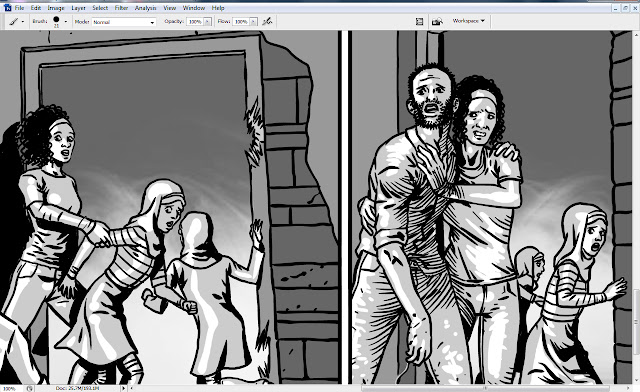 Hasn't been a great year, and I'm topping it off with a bout of whatever seasonal bug is doing the rounds, but I take some small solace from the fact that in 2018, Trump and May will just sort of continue in place without consequence for the whole year while the good old BBC cheers them on from the sidelines while running stories about Labour injecting AIDS-infected blood into babyfood jars or something similar "because Guido Fawkes and the Telegraph are talking about it so it is technically news", while the internet cracks down on alternative news sources much as Twitter and Facebook are already deleting and censoring millions of accounts critical of Israel, so the gains of the left will be undone in the coming year or so and we can all look forward to the last couple of years of social and political upheaval having been for fuck all.
On the actual for-real bright side, I got to do a serialised spy comic set in the 1960s this year for the 29th volume of David Lloyd's Aces Weekly digital anthology.  I made the female lead a non-white non-Christian and no-one complained about it being political correctness going mad, so  maybe there's hope for us all yet.  (/reads yet another evangelical defense of The Last Jedi)  Actually, never mind WE ARE CLEARLY DOOMED.
Still, next year can only be better, so may Allah bless you, your family, and all your endeavors in the coming year and beyond.
Posted by Brigonos at 12/31/2017 09:56:00 pm No comments:

People just don't behave like that - not even Germans

Been unwell, bit better now, writing a post while I wait to go to the pub.
MURRY KRISMAS ALL - enjoy it while you still can before those liberals and socialists that occupy all the positions of power and influence in the West outlaw Christianity, heterosexuality and being a white man AKA The Only Truly Oppressed Minority.  They won't be happy until we have Sharia Law, outlawed music, schools free from guns, and adequate medical coverage as a basic human right.
Nowt much has happened during my blogging absence, apart from some sort of collective delusion that The Last Jedi was a good film. It was a fine Stargate SG1 season finale circa seasons 7-10 (especially loved the expanded budget paying for superfluous space battles alongside the pointless B-plots padding out the running time until everyone retreats into a mountain to fend off the swarm of Apophis' army and/or his latest laser-based superweapon that can cut through the gate shield before one of those God-people with superpowers shows up to Deus Ex everything away), but it was not a good film objectively, flawed as it is in basic logic, lacking in consistent characters or arcs, as obsessed as The Force Awakens with rehashing the past with flashier visuals, and - hilariously - introducing as a late-in-the-day theme the idea that one should let go of the past and move forward.  Yes, that's right, a film that is the ninth in a series and which is mercilessly marketed towards people by appealing to their inner 9 year old to the extent it recycles entire scenes from the previous 8 not just expects this to work as a theme, but it has the notion delivered to the audience via the giggling puppet version of Yoda that has not been seen since the first half of a film made in 1980 because the writer/director has decided to ignore everything that happened in the canon since then - including the second half of that same film - and use the version of the character that he remembers best.
And the politics - oh sweet Allah the centrist dad politics!  Suffice it to say if you're still harping on about Clinton being robbed instead of admitting she was a horrible candidate because centrism was the problem with rather than the solution to running against a populist demagogue, then The Last Jedi is probably realpolitik incarnate, but if you're a snarky wanker who prefers the idea that when faced with populist demagogues you don't bitch on the sidelines about not having a political party pure enough to vote for once every four years and should just pick a fucking side and go down swinging, you're probably just going "WELP of course someone is profiteering from The Star Wars, they're called Walt Disney LOL."  NOTE TO SELF - ADD PRO BERNIE SANDERS REF HERE TO ANNOY PASSING CLINTS
The Last Jedi is a car crash of a film, but so expensive-looking and symbiotically/parasitically interwoven with the nostalgia - whether it be real or acquired through cultural osmosis - of its intended audience that it gets the benefit of the doubt that was denied the Prequels and Rogue One, and in this holiday season - or what's left of a holiday before the liberal socialist justice cucktard cultural Marxists purge anyone who isn't sufficiently pure - it's nice to see that people can come together and spread positivity and think well of such a bauble.  A shame they can't seem to do it without railing at mostly-imagined "Star Wars gatekeepers" out to Grinch Christmas for everyone (because THIS they get off their asses to get angry about), but then you can't have everything.