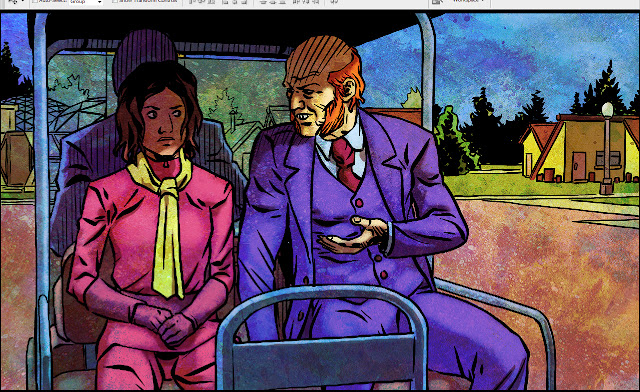 Oddly, it hasn't been laziness or playing videogames - the only two reasons off the top of my head I can think of for abandoning regular posts on a blog no-one reads - but it was, in fact, doing other things that kept me at a distance from you, my imaginary audience, as I was out doing The Work, which is currently appearing in David "I wonder if he gets Alan Moore's cut of the money but I don't want to ask in case it offends" Lloyd's ACES WEEKLY, the other UK weekly anthology about sci-fi and fantasy, but with creator-owned properties instead of house characters, so it makes even less money.
I am both fortunate and honored to be one of the drains on the limited compensation David receives for the headache of putting the title out every week, and to be honest if I'd done something that got picked up and turned into a film like David did, I'd retire, convinced I had paid my dues, and I would spend my time hating comics and sniping at newer, younger creators on the internet rather than tirelessly promoting them and giving them a platform, but I suppose that's what makes me and David different people.  Well, that and the talent and success.
ANYHOO the comic I have contributed alongside my barely-housetrained writing monkey Lee Robson is Velicity Jones, a female-led spy romp  NO WAIT COME BACK set in a version of the 1960s that will be familiar to viewers of the output of ITC and Lew Grade, so all PG13 stuff, though lord knows what that means these days - I watched some of that Dark Crystal show for children on Netflix and someone had their eye bitten out in the first five minutes.  Any wonder the world is full of psychos these days.
Non-psychos will find much to admire in Velicity Jones, I am sure, and it can be viewed via Borg distribution nodes everywhere for the laughably low subscription price of £6.99 per volume, $9.99 in dollars, or €7.99 if you want to be awkward.

I have, of course, deliberately omitted any mention of Bolt-01, our letterer on this and the previous two volumes of Velicity Jones, because like all comics creators, I marginalize and dismiss the work of letterers, the people without whom making comics would be literally impossible, so yah absolutely let's bung the colourist's name on the front covers of books there.  Couldn't tell a story without lettering and monochrome comics are commonplace in the market, but okay.  Bolt-01 (aka Dave Evans) doesn't seem to have a presence on the old social media, but the official blog of FutureQuake Press - a fine publishing venture in which the lad is balls deep - can be found HERE.
Posted by Brigonos at 9/30/2019 11:28:00 pm