If you need to disrobe, feel free - you're in a safe space, just mind the furniture 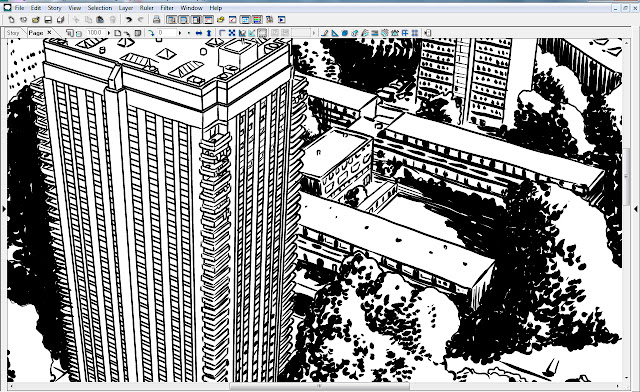 18th OCT - SUMMER OF '84 is a teen mystery thriller, except there's not really much in the way of mystery and things follow a pretty linear path.  I get what the makers are trying to cash in on, but this isn't a particularly good evocation of the era or its sensibilities - the serial killer, for instance, while a known quantity through the actions of real-life monsters, wasn't quite as embedded in early 1980s Americana as a cultural phenomenon as this leads you to believe.
There are dozens of text and video essays online explaining this fetishism of a terrible period in music and fashion much better than I'll ever manage in the paragraph or two on my screen grabs blog, and a good example is this one from the always-interesting Lindsey Ellis:


19th OCT - IT CAME FROM THE DESERT is based on an old arcade adventure game from the 8-bit era of home computer gaming, so as timely cash-ins go, this ain't one of those.  It's actually visually impressive here and there despite its obvious low budget, but the actors let the side down, leaning hard into the silliness, and not quite managing to find a balance between that and the po-facedness you need to really make a b-movie work, especially one so obviously looking to mine the silliness of atomic panic pictures like THEM! with its silly giant ant premise.
Still, if you can tolerate the "deliberately-bad" genre of horror movie, this is borderline-watchable.

20th OCT - QUATERMASS 2 is another one from the "I'd watch this even if it wasn't Spooktober" pile of classic horror movies I have to hand, with Brian Donleavy as the world's most unconvincing rocket scientist, but still pretty charismatic and distinctive as the titular Quatermass as he struggles with the notion of malign intelligence from beyond our world, which he speaks about in terms that suggest he's explaining extra-terrestrials to someone who's never been exposed to the concept, reminding you that all of these cliches I sneer at like the post-millenial dog I am were new to audiences at some point.
I was briefly intrigued by the insistence of several characters that "we don't have any police around here", which really does show you how things have changed - no coppers enforcing capitalist hegemony and hunting down illegals?  INCONCEIVABLE.
As solid as b-movie shockers get, and always watchable.

21st OCT - LEPRECHAUN I have somehow managed to not see a single entry in this surprisingly lengthy slasher series - 8 movies and counting - so this is the year I finally see why anyone would want to make a horror franchise based on a borderline-offensive caricature of whimsy from the ludicrous theme park that is my home country.
"Wait, aren't you from Tyrone, which is in the North, and thus part of the UK?" I hear astute blog-watchers ask, to which I reply "oh yes, sorry, you are correct in that I'm not located in Ireland at the moment - I forgot it isn't 2020 yet."  AND YES THAT IS A BREXIT JOKE BECAUSE GOD FORBID WE SHOULD FORGET THAT'S HAPPENING.
Jennifer Aniston did apparently spend a lot of her career doing things other than starring in Adam Sandler movies, and that includes time in the b-reel mines eking out a meager living playing "The Girl" in absolute horseshit like this.  I do wonder if they went back and edited in some extra footage they had left over after Aniston got famous in FRIENDS, because there's some chase sequences late in the film and one or two are just lengthy tracking shots centered entirely on her backside and they do go on for a bit, but that kind of exploitation isn't unusual in this era of film, plus I don't really care enough to look it up, so it's hard to know either way.
The - ...well, we'll call it "the plot" for the sake of argument - revolves around a man who finds a pot of gold in Ireland and the Leprechaun that owns it follows him home to America trying to get it back but is shot and left for dead in an old house for 10 years before being revived by Jenny and her dad, cue bloodshed in some not very inventive ways.  It's hard to see why this was popular enough to spawn 7 sequels, to be honest, as it's not even a particularly good example of the type of exploitative trash that the slasher genre had devolved into thanks to the Reagan administration's destruction of the moral fibre of America, and I think the reason it probably did well was because of its audaciously stupid premise, as in the home rental era of movies, distributors would sell movies at trade conventions to retail and rental outlets in domestic and foreign territories, so a movie could - and often did - make back its production costs and even turn profit before it had even been released to the public, which is why you would see movie sequels churned out so quickly that they were obviously in production before the original was even available to rent or buy.  This movie sounds so stupid on paper that I think distributors at the time either assumed it was tongue-in-cheek, or self-aware in some way and thus much better than it sounded - or they thought it was so dumb that it stood a good chance of catching people's eye and getting rented.
That's my big insight into the VHS era market forces that made a successful franchise of this and many other terrible films.  I think we can agree it was well worth turning up to the blog to read it.
This movie sucked.

22nd OCT - LEPRECHAUN 2: LEPRECHAUN HARDER has a glaring continuity error right off the bat, with the character stating his age as 1000 years old whereas in the previous movie he said he was 600, and almost immediately I wondered what I'm doing with my life.
This is clearly a different Leprechaun altogether, so there are quite a lot of these little bastards knocking about and so it doesn't matter what the rules are for his powers and/or the limitations to how they work, I mean... having consistent rules would infer that there was going to be some point where characters outsmarted the villain with a clever plan based on established lore, but really they just find a certain object that can stab the unkillable baddie and make him for-reals dead and then the movie ends without even the usual "I'm not dead yet" jump scare.
This time the Leprechaun is after the descendant of someone the Leprechaun killed a thousand years ago because he wants to make Leprechaun babies... sigh.
This film also sucks.

23rd OCT - LEPRECHAUN 3: LAS VEGAS LEPRECHAUN and I know this is the third of a movie series based on something that is to a certain nationality what a gollywog is to a black person, but even so, this one is kind of sort of very racist, with the half-pint horror biting off an Asian gentleman's ear and announcing "I love Indian food!  It's so spicy!"  The same gentleman later lapses into Arabic caricature for some reason, so I don't know what to make of that.  We deal with yet another Leprechaun unrelated to the previous versions, this one having the ability to turn those victims he doesn't kill into were-leprechauns, so you get American actors doing Irish accents and there's a bit with a sex robot because it was the 1990s, I guess?  I don't know why I'm still trying to make sense of these things.
Does it even matter that this one is set in Las Vegas and that he meets Elvis?  It's a bit more knowingly silly than the first two, at least, but still far from good.

24th OCT - LEPRECHAUN 4: LEPRECHAUN IN SPACE welp here are.  I can stop watching bad movies now because after this there's little point.
To be fair, this goes all-out to be stupid, with the Leprechaun having a shootout with space marines and regenerating himself by climbing out of a man's penis before turning Godzilla-sized for the finale, so you can't say it isn't trying - which is probably why I'm a little disappointed they dropped the gimmick of the Leprechaun always talking in rhyme.  This is gloriously bad, and there are even some familiar faces among the cast like Lieutenant Gruber from 'Allo 'Allo as a mad scientist (complete with German accent), and the gunnery sergeant from Full Metal Jacket as the leader of a corps of marines -fun fact: he was slated to play the part that eventually went to R Lee Ermy.
There's some problematic elements to add to the racism from the previous movie, particularly the misogyny and "man in a dress" humor of the second half, but I actually quite enjoyed this because it finally delivers on the promise of the original that you're going to watch something ludicrously terrible rather than just plain bad.

25th OCT - LEPRECHAUN 5: LEPRECHAUN IN THE HOOD Boy oh boy, given the track record of this series with racial sensitivity I was not looking forward to this one, and sure enough, it has it all: racism, misogyny, transphobia, Ice T's acting - everything about this one is offensive, and it's hard not to see it as being by design.
Although occasionally amusing - such as when Ice T tries to shoot someone without realising his trigger finger was torn off a half hour earlier in the movie - there otherwise isn't much in the way of the inventive deaths that slasher movie fans have come to expect of the genre, with many of the deaths happening entirely offscreen, including a rape/murder sequence that is deeply troubling even without the transphobic element.  In a movie that transplants an Irish stereotype to a genre known for its exploitation of African Americans, I suppose it's kind of impressive that the film manages to drag some anti-Asian racism into proceedings too, but apart from this commendable dedication to keep the film focused on something dear to the maker's hearts (hate crime), this is just dreadful.
True, it does star the Third Worst Actor From Star Trek: Enterprise, but even that can't salvage it.
Posted by Brigonos at 10/26/2019 10:38:00 pm