Americans giving Mexicans diarrhea? What the hell is going on? 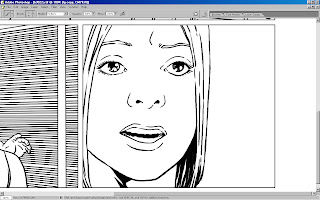 Weekend - bored and I slept too much. Also babysat.
People will tell you kids are a treasure and they are lying. Kids are a job like any other, especially when they aren't your own so you haven't managed to work out the balance between everything else you're supposed to be doing that day and filling their time with something other than fighting or setting stuff on fire. It also creeps up on you that your conversations with them have changed somewhere along the line from favorite Disney character (usually one of the princesses) to "you know how in dreams the people you dream about think they're real? How do you know that you're not being dreamed by someone else who's dreaming that you think you're real?"
I do not recall having these conundrums at 8 - my main concern at that time was figuring out the best way to set Star Wars toys on fire - so like a trooper I went about figuring out the best way to condense solipsism into the most basic sentence so there was no ambiguity as to what was being said and then I said she should ask her mum.

And so to another week of slowly chipping away at the GN beast, and another page of Frank in which still nothing happens.
This suffers from me trying to simplify to a more cartoony look, but ideally when doing that you have to take great liberties with perspective, anatomy - all the stuff that you're supposed to be taking pains to get right and which I can barely draw convincingly as it is. I did eventually abandon the attempt about 8 pages in, so I found my way in the end. 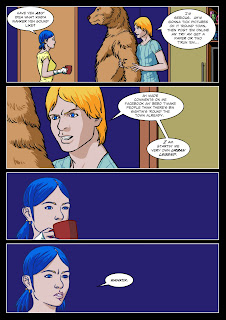 In the interest of full disclosure, I did once set about trying to fake a bear sighting in my home town, but I drank really heavily at the time. A long term project outside work in THE FACTORY was practically unthinkable - no way was I together enough for that shit. I stuck with underage drinking in the end, and it's made me the man I am today.
Posted by Brigonos at 3/28/2011 07:08:00 pm