Don't mind me, I'm just fixin' t'get back into a drawing routine and will be cluttering up your feed until that happens with vague stabs at regular updates. 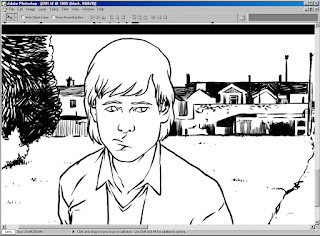 I have been watching:
Robocop -a-frigging-gain, mainly because it is fantastic, but also because when the matter came up during discussion of another fictional Detroit resident I had the hankerin' to watch it.
It keeps giving, does Robocop, as there's this bit where Murphy is in the changing rooms and someone asks "why you down here, man?" and Murphy responds that he doesn't know, that OCP are moving guys into bad precincts all over.  In the comic adaptation of the movie, I recall the desk sergeant chewing Murphy out for transferring to a rough neighborhood from his cushy suburban detail to build a reputation by acting like a cowboy, and I think that stuck with me as Murphy's motivation even when watching the film, but then Bob Morton mentions that he's moved "prime candidates" into position so they can get the ball rolling on the Robocop programme and they hope to get a prototype into production within the month.  OCP deliberately killed Murphy so they could build Robocop - I never noticed that before, and it's a neat twist on the cowardly corporate manslaughter laws that allow deaths that are pretty much just murders to go unpunished. Another neat thing about it is that in dating as it has, it comes off as a kind of retro-futurist movie and becomes relevant all over again in the same way Fallout's stylings essentially make its setting timeless - Robocop's world of buttons, videotapes, analogue communications and scheduled news updates is a catalog of anachronism that essentially creates its own reality for the story to exist within in a manner I've only really seen recently in (ironically) Dredd.
Posted by Brigonos at 1/30/2013 12:10:00 am