working harder than my liver on payday 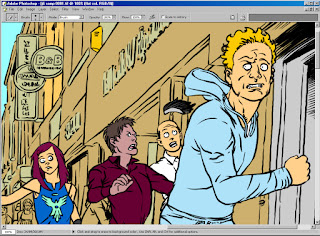 Currently running up a few sample pages as part of Jamie Smart's challenge to create a character a month - not that it was a challenge he threw out there as much as a statement of intent born of the classic frustration every creator feels when they see an idea they've been fermenting show up somewhere else (I was gonna link to his post, but the website seems borked at the moment).
We're all essentially drawing upon the same pool of influences derived from our cultural background of movies, music, and literature so it's not entirely surprising that people come up with the same ideas every now and then, and when it happens with something I've been thinking of doing my response is "I hope it is done well", because my basic motivation in doing anything creative is I think it would be fun, and someone else doing it saves me the bother of trying to do it, so I look forward to seeing someone else's take on the notion and usually only get miffed if it isn't as fun as I hoped it would be - though in fairness, I get miffed at anything that isn't as fun as I hoped it would be.
All the same, I see a lot of creators get very snarky if their idea turns up somewhere else and I think that this is a bad approach to the situation that ignores the huge amount of effort they've just been saved from having to invest, because laziness trumps creative pride in this house, thank you, but also because you really do need more than one idea to build a career in any creative industry, and if you do only have one idea, then for your sake I hope it is "I am going to steal everybody else's ideas."1
Smart's notion seems like a great one as it's a mix of  "put up or shut up" and  responding to setbacks with creativity, so I am resolved to doing my own "one pitch a month" post here on the Friends and Neighbors blog because it commits me to getting my bloody finger out creatively, but don't be surprised if I just bung up something old and pretend I've tweaked the concept a bit.  I've started a bit late in the month to get one pitched for January, so I'll aim to get a pitch and basic proof of concept bunged up in the next week or two.

And in the meantime, if you fancy reading even more gobshitery from me, Colin Smith has an interview with myself and Lee Robson over on the Too Busy blog where we talk about life in the small press trenches.

1  Although if and when I steal other people's work, I like to call it "recycling", "a homage", or "I have never read/seen/heard of that so I couldn't of nicked it SO THERE."