The law was made for man, not man for the law 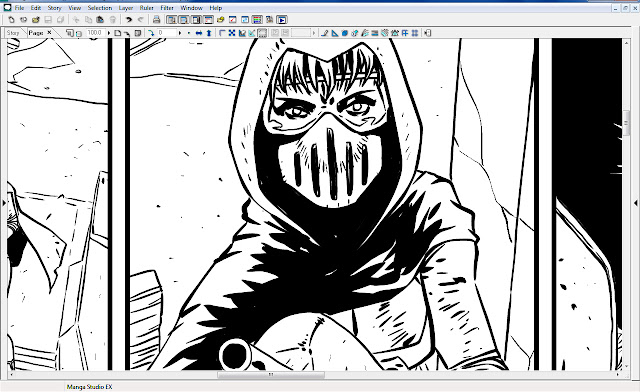 Sweet shimmering cripes, but my blog posting sure does take a hit when I'm not doing stuff for other people.  Luckily I have that Comicsy store to keep feeding books that no-one will ever buy, so there's no reason not to finish up a few projects laying around which I never put the finishing touches on for silly reasons like not being able to use my hands... hahaha, oh lordy but that was just an awful, awful time.
Been catching up with my Hawaii Five-0 viewing with the tail end of season five, and the sudden introduction of Kono's super-hot mum is hilarious for many reasons, but mainly for the fact that they clearly wanted to cast a younger woman so that she could look good in a bikini in the flashbacks and her grey hair in the present-day sequences is thus fried comedy gold that tanks even the most remote possibility of pathos.  My first reaction to giving Kono a solo episode to herself was understandably "WHY?" but then five seasons in and I still forget she's actually in this show most episodes, so some spotlight time is probably overdue - if only to take screentime away from McGarrit's dull girlfriend and her ongoing commitment issues... with actually starring in Hawaii Five-0.  We lost Lauren German for this?  Fuck you, McGarrit's dull girlfriend - piss off to whatever failed pilots you've been shooting and let my show move on to other characters.
It's hard to articulate my problems with Sense8, as unoriginality isn't really that big a sin when it comes to genre telly, but my overriding impression of it is of watching a movie-within-a-movie, like in that film Bowfinger, when we - the audience in the real world - can tell that the fictional film inside the film is terrible, but the people in the film watching the film in the film think it's great.  I think that Sense8 is aimed at that audience - an entirely fictional one that has never seen another sci-fi show, particularly not the crowded post-Heroes "disparate group thrown together" sub-genre of "not-superheroes" superhero television.  The only people I can see really enjoying Sense8 are professional critics used to turning off their memory of other, better shows so that they can make an objective evaluation that is largely unnecessary in this day and age when everything that isn't cross-referenced by its audience with similarities to other things is probably being sold on being a repackaging of something else by the makers "it's like The Matrix meets Heroes only with all the fun and joy removed" oh wait that would just make it Alphas, wouldn't it?  Well anyway, my general opinion is that Sense8 is not very good on top of having a stupid fucking name.
Posted by Brigonos at 6/08/2015 11:37:00 pm