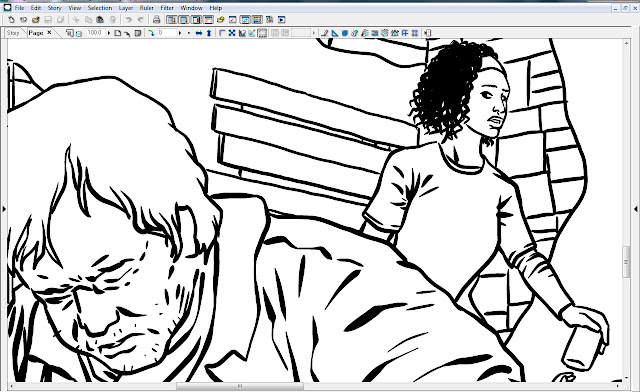 I really wish I'd seen Valerian and the City of a Thousand Planets back when it was doing the rounds in the cinemas, as the last couple of weeks have kind of put a damper on the material.  Where - a mere four weeks ago - I might have chalked up the lead's aggressive overtures towards his female colleague as the actions of a letch with misplaced enthusiasm, these days Valerian can be viewed as nothing less than a persistent sex pest and serial molester.  A string of female co-workers is plastered along the walls of his and Laureline's starship seemingly as a joke about his womanising ways, but it's plain from the off that his mating patois is severely lacking and that when it fails him, he is quick to resort to physical aggression towards women, leading the mind to ponder on what kind of horrors have gone on in this isolated starship far from any witnesses, and why these countless women have disappeared from Valerian's workplace never to be seen again after he has "conquered" them.  I know there's a trend out there in that there social medias for dark takes on seemingly bright and colourful material, like, I dunno, "what if the computer in Jem And The Holograms is actually Jerrica Benton's dead mother trapped in a digital purgatory by Satan to tempt Jerrica into a rock 'n' roll life of sin while being doomed to dispassionately view her descent - or worse, to actively seek to cause it that she might bargain a way out of her own torment at the cost of her only child's immortal soul?" but trust me, there's not a lot of mental gymnastics involved in getting to the dark take here, Valerian is one creepy motherfucker right from the first moments we meet him, and through the lens of the film, we are supposed to see Valerian as he sees himself - heroic and determined, rather than seedy and unthinking.
The rest of the film isn't that great, either - some good setpieces, but a lot of the FX are surprisingly poor - well, as "poor" as they can be when they still clearly look like several million bucks' worth of effort - especially a blue blob-like alien that seems to be voiced and intermittently played by some American lady who I suspect I am supposed to recognise and who probably ends up with more screen time than any other character apart from the two leads despite... let us say "less acting ability than those who surround her" in a very even and non-judgmental manner, if only because I am now worried that she might be some sort of Make A Wish winner who got to star in the film as a last request.
I do recall trying out the Valerian and Laureline books a few years ago, and can't really say my memory of them aligns much with what I saw here, the pacing seems really slow for something so episodic and which covers so much ground, and it's flashy and bang-y and sees a welcome return to the fantasy end of the sci-fi spectrum, but ultimately, it's just an expensive-looking curiosity with the odd memorable moment and a wildly inconsistent tone.  Mainly, though, it's just hampered by how much of its creepy lead's behavior you may or may not be willing to look past in order to enjoy the rest of the film.
Posted by Brigonos at 11/19/2017 09:59:00 pm