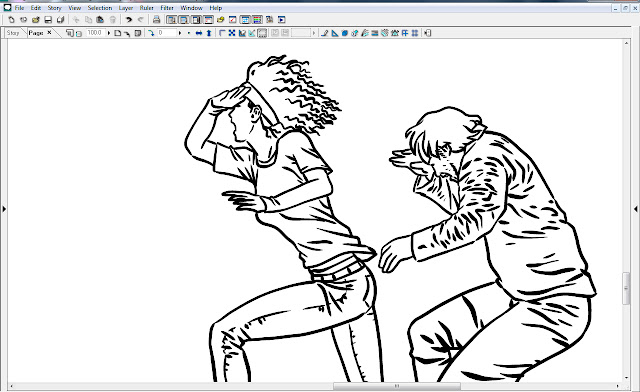 Hulu's Marvel's Runaways, based on the  teen superhero comic of the same name, has dropped three episodes.
One thing that the bafflingly-enduring but perpetually low-selling comic series did well in its original incarnation was its page-turn reveals, pre-title scenes and cliffhangers (yes I know this is three things shut up), but there's none of that in the show, nor does the show utilise archetypes as well as the original comics.  Also missing - aside from a synth score nicked from Stranger Things - is the original comics' ahead of it's time stripmining 1980s and 1990s popular culture for references and plots, which is incredibly common in tv shows right now, but back in the heady days of the early 2000s when the original comics landed, not so much.  I can only really think of Smallville as ploughing that furrow as determinedly and within the same genre as Runaways, though to be honest, when characters on that show were announcing that someone had "gone Thelma And Louise with the Creature From The Black Lagoon", it felt like maybe this trope was a bit over... and then it went on to become the media norm, showing how much I know.
The cast is mostly good, though the characters don't seem very interesting.  The parents are inevitably fleshed out with unnecessary backstories and rote interpersonal dramas, where the original comics painted the characters with an admirable focus and economy that amounted to "bad guys, but good parents" to the point I feel they worked better as archetypes, if only because the show's idea of elaborating on Japanese characters is to have them go out for sushi, or elaborating on black characters by exploring their guilt that they left "the hood" behind for the "white man's world" - and yes, I am quoting these terms directly from the show itself.
Of the kids, Karolina is duller than she is in the comics, and just to be clear what an un-achievement this is, Karolina Dean is one of the dullest characters in comics.  Molly Hayes has been aged upwards to a teenager from the original comics' tween so there isn't any distinction between her and any of the other kids anymore, while her parents have been written out of the story (two less characters keeps the cast salary lower, I guess), arguably making her entirely redundant as a character to the point there's a bit where she goes climbing out a window to escape someone she doesn't need to be escaping and all I could think of was that Seventh Doctor episode of the original Doctor Who where the end of the episode is getting near so he just climbs down a cliff for no reason and just dangles there while the credits kick in, like someone had said "right, put a cliffhanger at that bit" to the scriptwriter and had been taken entirely literally.  Alex looks like his comic book counterpart, but occasionally this just means he looks vaguely silly, while Nico looks nothing like her comics counterpart - by which I mean she looks Japanese HA HA I MADE A JOKE ABOUT ARTISTS NOT TAKING CARE TO ACCURATELY RENDER ETHNIC AND RACIAL IDENTITY.
Anyway, I was balls drunk for the first episode so I really liked the synth score and atmosphere of the piece, which reminded me of John Carpenter movies, but as the episodes progressed, it felt like they were slowing down, if that makes sense as an observation.  Where the original comics tore through their plots, the show doesn't feel like it's capitalising on the in-built acceptance in this kind of teen-friendly media for recycling pretty much anything from anywhere to pad out the running time, though this also gives it a feeling of commitment to being a standalone drama with its own identity rather than something which just stripmines the work of other creators and hangs a lampshade on its thievery like this excuses laziness and creative bankruptcy rather than simply being an extension of both.  The comics often failed to stay on the good side of creative recycling, but again, were fairly unique in their approach at the time, series creator Bryan K Vaughan being one of the first post-Mark Millar comics writers to really nail down the misanthropy/soundbites/cliffhangers approach to US comics writing that's since become ubiquitous.  That approach is entirely unremarkable in teen programming at the moment - The CW's slate of interchangeable cookie-cutter superhero shows being a prime example - but in the early 2000s was not really that common, so by reaching backwards towards when teen dramas were instead a bit more focused on their core themes and ideas, Runaways the tv show might find itself seeming similarly uncommon in 2017.  I suppose we shall see.
Posted by Brigonos at 11/29/2017 12:22:00 am

Labels: screen grabs, very very drunk, what are you talking about Willis