In whatsoever place that I enter I will enter to help the sick and heal the injured, and I will do no harm 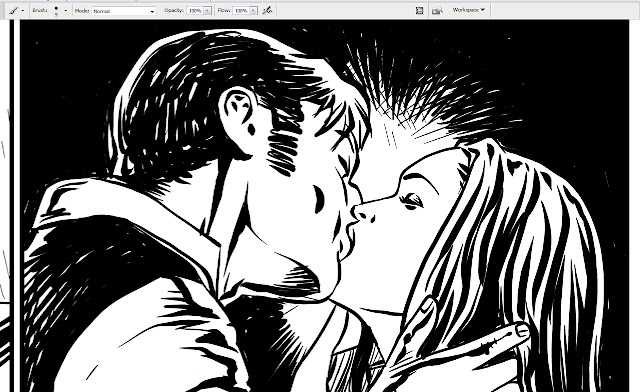 I occasionally lapse into talking about The Politics on this blog, and it says a great deal about me that this usually happens when I'm trying to talk about the plot of an episode of Magnum PI and not when there is an actual General Election in this increasingly awful country.
Can you blame me, though?  The politics of a Magnum PI episode at least won't send a sane person screaming from the room like they've just watched a tentacled thing unfurl itself from a lower dimension like an origami swan made of rotting meat but anyway the election's nearly over and I guess in a week or so we say goodbye to the NHS, as the Americans come to improve it like they improved Bolivia, Chile, Afghanistan, Iraq - you know, all the other places they went to and made better for the inhabitants.
The NHS has not just made life materially better for us all but also made altruism a part of the country's DNA rather than the racism, atrocities and enabling of American corporatism's never-ending war on the poor that's pretty much the only other thing that's a constant about our failed empire.  We are at heart not a good people, I am sad to say, because we are descended from conquerors and their servile playthings and nothing good can come of a nation that is proud of this rather than angry or ashamed - but for a time, we had the NHS.  People would come from around the world to learn in the halls of its hospitals how to care for the sick and the disabled, and they knew this was the only place they could learn it because all they would learn elsewhere was how to deliver the most cost-effective treatment rather than the best.  We sent forth from our shores the best doctors, the best nurses, and being a country that spawned this wonderful institution which contributed not just to the treatment of the sick of this country but the betterment of humankind allowed us to lie to ourselves that this terrible, hateful nation was not a thing that needed to be scoured from the Earth and its patriots mocked for the damaged children they were and driven into the sea to be eaten by crabs or bummed to death by the Innsmouth people, because we were the British Flipping Isles and the worst thing about us was that occasionally we would produce one of Richard Curtis' films.
And now we're just the country that invented concentration camps.
In Yarl's Wood we refined positive spin for concentration camps because we knew that when people thought of concentration camps they thought of open-air prisons full of skinny people and ringed with barbed wire, and not anonymous red-bricked warehouses in a random corner of a business park in Bedford.  Through the finest British ingenuity that gave us 11,000 dead Kenyans, we've not just rehabilitated the image of the unthinkable but made it a profitable business model to export.  We laugh at the Americans' clumsy caging of brown children and then just letting any old senator with a camera walk in and take pictures because we don't even let our elected representatives through the front gates of our concentration camps - we do it right and hide them like the shameful secret they should be.
We may be a small-minded, racist nation of bull-necked gammon that will not stop until we hear only English spoken on our high streets and only white people have our dreadful low-paying zero-hour jobs because we are the British Fucking Isles and we are going to Hell and we're taking you all with us, but for a time, we were a people that helped.

Labels: this is the end, We are all doomed, we had our chance to make things better and we blew it