I salute your honesty, my dear - not necessarily a quality to be despised 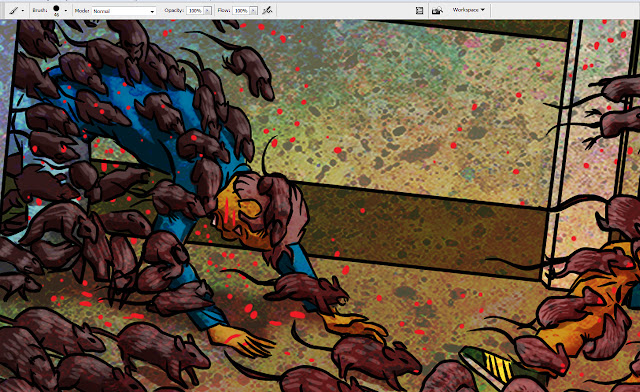 Let's take a look at a list of the utter garbage I've been shoveling down my mental gullet with all the awareness and distinction of a pig at a trough this last week or so, shall we?

Bull - a US tv show about a rich guy who tries to get money from other rich people who aren't as nice as he is and give it to poor people, because rich people only care about money, and not the important things like family and... puppies.  This is a show with a confusing set of priorities and a smug lead character that often confuses being an arsehole with being clever and/or right, though that's pretty much every lead character in an American tv show, and has been for quite a while.

Some thing with Jimmy Smits whose title I can't be bothering Googling but which clearly did not make a lasting impression: see above.  A law thing where Jimmy "HOLY" Smits plays the dad of a lady lawyer but it was so ham-fisted I can't even remember if she was the idealistic one or if her dad was, or which one of them had to convince the other to use their law powers for good - well anyway it's another Jimmy Smits winner.
I don't know why I'm being sarcastic - I like Jimmy Smits.
Make me a Bail Organa tv show, Disney, you cowards.

Hawaii Five-0 - these are essentially interchangeable shows set in Hawaii about ex-marines tackling violent crimes while surrounded by underwear models.  Occasionally they help a sad child with a problem that involves either parental involvement in crime, or sexual trauma, they have big muscles and salute the flag at least once an episode.  Now and then a gay person will appear and they will be totally cool with that person's sexual orientation - most likely they will even take time to lecture someone about loving gay folk unconditionally, and then possibly within the same episode or even the same scene someone will make a homophobic gag of some description, usually implying that a male character is in some way too effeminate.
There was a recent episode of... uhhh.... let's say it was Magnum, not that I or anyone else really knows the difference, and there were some Hawaiian protestors doing their protesting about Hawaiian things that I know nothing about but I will still lay good money it boils down to something white people did wrong - because if you follow the news in even a cursory fashion it always is - and a Hawaiian character makes an appeal to some police officers who are also Hawaiian to consider their heritage and not arrest all the peaceful protestors who are doing nothing but occupying private land meant for property development and the cops take all of a hot second to decide they have their orders, and no kidding, "only obeying orders" is not challenged or redeemed at any point because these are shows 120% in the tank for both the military and militarised policing.  The unambiguous message is that cops will absolutely mess you up if you challenge capital, but they will do it "with a heavy heart", which as anyone who's been following British politics lately will know as the rallying cry of bougoisie bastards like Brian Cox and Robert Webb who are off to vote Tory on December 12th.
Okay I think I might be letting my personal politics get in the way of enjoying perfectly good Western capitalist propaganda, but getting back to these shows, they really are interchangeable to the point that the Halloween episodes of both shows were about escaped lunatics, and someone in one of the shows actually says "what are the chances of there being two escaped lunatics on Halloween night?" even though this happens literally every year, and is an annual Hawaii Five-0 event.  Yes I am steeped in Hawaii Five-0 lore - I might be an irredeemable communist but I'm still addicted to bullshit tv shows.
Posted by Brigonos at 11/25/2019 07:45:00 pm