Harrison Ford is irradiating our testicles with microwave satellite transmissions 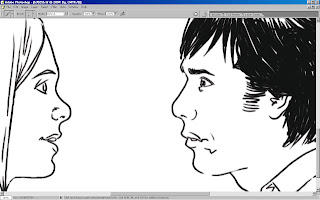 Back to work for Bryan, RSI or not. Got some deadlines coming up and the drugs they give you on the NHS really aren't up to the job, so may as well get my shit done. Albeit slowly.

Frank continues, though towards what end who can possibly say? Well, I can, obviously, but I'll make you read it anyway. 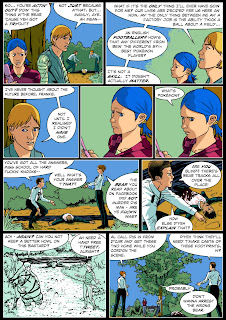 Haha - Tweeting. Because that is what the kids do now.
If indeed you still do read this and haven't given up already, today marks the appearance of a dirty stinking southerner because I thought "you know what this strip needs? More badly-realised Irish accents." It's based on an actual accent, but vague enough to just be ex-Dublin-ish-kind-of-sort-of. I have taken a minor artistic liberty by not including the traditional bulletproof stab vests worn by our local coppers as part of the uniform, as I figure that tends to draw the mind towards what I'm deliberately trying not to draw the focus of the strip towards (the fact that we had a great time for a few decades shooting and bombing the shit out of each other), and though I'm coming around to the idea that I should include it anyway, this will probably happen with later pages when I'm up to drawing for more than a few minutes at a time. Bit late to edit this one as it's been in the bag a while and I need to get the daily post up.
Posted by Brigonos at 5/02/2011 09:53:00 pm