I wouldn't go to this toilet with my big sister's toe

Still RSI'd to buggery, chaps, but I'm checking in for the weekly does of "Will it ever start doing something other than blathering at me in a crudely-illustrated fashion?" webstrip Frank, seeing as I have that already drawn up (mostly).
I thought RSI was a bollocks made-up thing like Yuppie Flu and Cat AIDS (both real), but for once it's not laziness that stops me getting any work done, I am genuinely not able to sit down at the pc and use the tablet or mouse. My fingers are tingling just from using the laptop's trackpad - which I despised long before now and still do. Anyway... 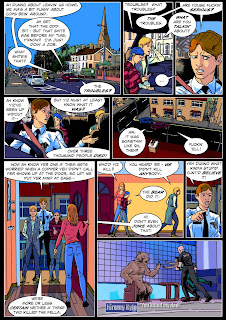 I just sort of rushed through the colour on this and assumed I'd get back to it later (obviously I have not had that opportunity thanks to recent events), which is why the tones are wonky and the shot of Cookstown's Chapel/Church Street (it's one or the other depending what religeon you are - no, really) looks a bit like Los Angeles to my eyes. Which it should, because Cookstown is the Los Angeles of Mid Ulster, and I'm not just saying that because we have a crack problem and drive by shootings, I'm saying that in jest because it is not true.
For some reason I never got around to dropping that cutaway visual at the end, but at the time, a recurring theme in Frank (as was) was the lies and ignorance that hold communities together, and nothing to my mind said Big Fat Lie like an episode of the Jeremy Kyle Show, in which an equivalence is drawn on a daily basis between the terms "scum of humanity" and "working class" by a smug ferret-like being in a suit whose face I should like to punch with fists made of broken glass and rusty nails. Regardless, the joke may not really work but thematically it's justified enough for inclusion.

Labels: Frank, p8, The Man By The River