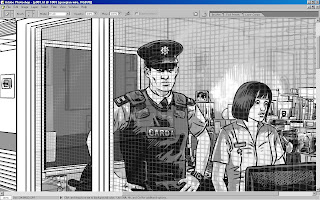 Yaaaah-ah-ah-ah! Deadlines! Minging finger pains! Batman: the Brave and the Bold!
I don't know which stresses me more...

Prompted by Colin Smith's rabble-rousing, I've been thinking about Batman: The Brave and the Bold a wee bit - while I watch Star Wars and realise it isn't nearly as terrible as I like to tell myself, oddly - but I think B:tBatB is exhibit A in the case for the accusation that popular culture is now irreparably disappearing up it's own arsehole.
It's a popular show among internet nerds and fans of the camp and outrageous, but kids seem to hate it, which at first surprised me, but then I guess it makes a kind of sense given my 11 year-old niece has been bugging me for ages to see Let Me In because she's a big fan of the character Hit Girl from the movie and comic book Kick Ass. Kids want something that's aimed beyond what we assume is 'their level' and the older Batman 'toons fulfilled that role without basing entire episodes around jokes taken from the website Superdickery or context-free visual references to Dark Knight Returns.

At this point, the Brave and the Bold is just an exercise in appealing to the internet and unsurprisingly it hasn't worked out so well as the show has been canceled after a mere three seasons, which even the rather-reviled The Batman managed to beat. I'm not saying it's a bad show by any means - John "Bender" DiMaggio voicing Aquaman on the explicit assumption that he only got the gig because Brian Blessed was otherwise engaged is always going to be entertaining to me - but appealing to a rather narrow band of fandom can never be that great an idea for any creative enterprise.
Posted by Brigonos at 5/03/2011 04:48:00 pm