and now I'm Ann Coulter - as you may have noticed, I'm coming slightly unhinged 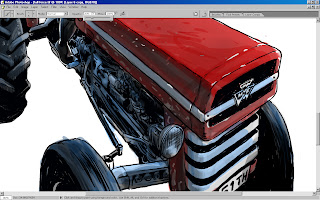 Rather than review Al Ewing's entertaining pastiche of pulp noir (particularly Jerry Aherne's Survivalist series) in Death Got No Mercy - a book I bought on the basis of it having a cover which features a man fighting a bear - I thought I'd let the work speak for itself:

The three punches took less than a second to throw, and he felt one of the bear's ribs go with the last one...

He'd killed a bunch of folks, sure - but there came a time even that wasn't much consolation.

Cade had never killed a woman - though he'd been accused of it - but he wouldn't have a problem if the circumstances came up.

Cade wasn't in the habit of trusting people who nailed him to the middle of the street.

"Can't have a king with no bling, a ruler without a jeweller. You want loyalty - be royalty."

"Down here a man's leadership skills can be a matter of life and dinner."

He never knew San Francisco had such a thriving banking community.

"I'd like to know if you're serious about being deleterious. Eat someone for me."

Cade had killed his first man at age eight. He knew how easy it was once you'd started, kid or no kid.

Cade figured as long as he was wishing, he'd like a pony.

Twelve hours without killing someone. Cade figured it could be done.

Cade was a lot of things, but happy wasn't one of them.

He figured he could sit through an episode of Rules of Engagement if he had to.

There'd never been a time he hadn't wanted to kill anything that moved.

Cade shook his head. He wasn't a man to hold back much when it came to killing, it had to be said.

But Cade was sick and tired of feeling things.

When he was in the mood for it, Cade could be a real stone cold son of a bitch.

Some inner gear slipped and snapped, the jagged metal teeth of it tearing at the workings of his soul, damaging them beyond any repair.

It was as if the time spent beating his only child gave him strength.

It was clear, in other words, that this was a problem Cade would have to solve himself, despite being all of eight years old.

If he was lucky, he was about to murder the city of San Francisco once and for all.

He was a man who'd shot his own conscience in the face so he could murder easier when it came time to.