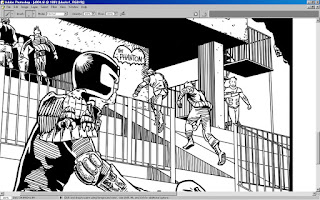 Whoopsy daisy forgetting to post again.
Anyway, still drawing Dredd, still finding I only make headway when I get out of bed and sit down and work - I swear, it's almost like there is some sort of connection between not staying in bed playing videogames and actually getting something done.
If I had posted last week, I would likely have posted a link to the shitstorm in a teacup that was comics genius Grant Morrison  writing a snide, itemised, meticulously researched 5000 word response to an internet article.
So now we know - when you read something that is incorrect on the internet, don't just go about your day like ONE OF THEM, sit down, decide on an editorial direction for your response, then throw obsessively-collated facts at each and every sentence of the article and sign off by saying that you're in no way bothered by what the article was saying - because that's how genius rolls.