It was all for the best. All of it. 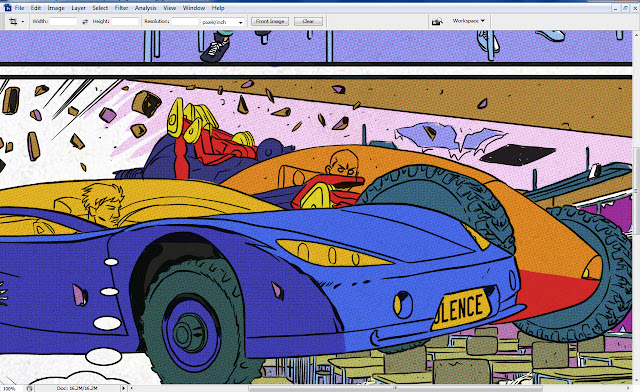 Music is resonance, vibration, and energy, and resonance, vibration, energy: these are the foundation of our plane of existence, composed as it is of protons and neutrons orbiting and vibrating in so perfect a synchronicity that they hold close and sustain each other across the lifespan of our universe (whatever that may turn out to be).  That vibration and resonance is the music that holds all things together, and it's hard to escape a suspicion that somehow the Goblin King tapped into that form of music like he did so many others and became a part of it, because he feels like he's everywhere.
It seems at the very least rude to say - on this of all days - that I am not a David Bowie fan, but it's the truth: I was not a devotee, I didn't know my Hunky Dory from my Black Tie White Noise, I just knew him as a presence in popular culture like Noel Edmonds or something - there, but enigmatic.
Having said that, I think back and I get all the references to him in popular culture, like a scene from The Venture Brothers which uses his lyrics for dialogue, or comic stories that riff on his song titles - I knew what these things were referring to without being told, so perhaps I was a fan all along without acknowledging it, or possibly Bowie has made so much music that has so influenced the world around us that like a bird chirping back a ringtone in a park, some subtle vibration within the world has been altered by the tunes he created and Bowie has now become a part of the DNA of our reality.
When I heard David Bowie had died, I didn't believe it, but the more I thought about it, the more I wonder why I doubted it.  I mean, was I thinking "he can't be dead - he still has so much to do"?  It's David Fucking Bowie we're talking about here, what's he got left to do?  If I'm doubting he died, it's because I suspect he ran out of things to do and turned his hand to another bit of reinvention.  I choose to believe that, then - that he has not left us, he's got back into his music.