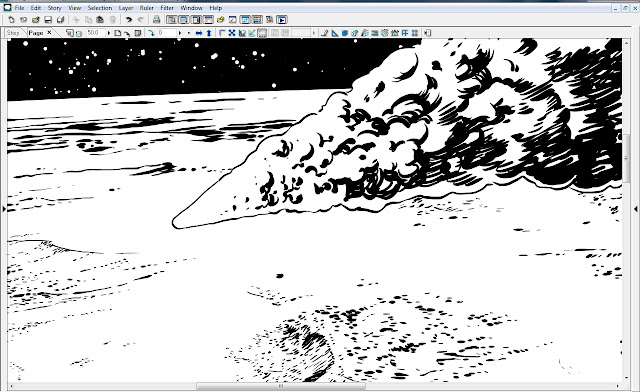 Re-watching Rogue One, it's hard to know how much of it is an actual mess and how much I am reading as a mess because I know that a lot of behind-the-scenes shenanigans went on as the producers inexplicably panicked at the last minute that they would not make a cubic fuckton of money from a film with the words "Star Wars" in the title even when it has Darth F Vader in it.
But Rogue One is certainly episodic - in a manner reminiscent of that wave of cheap space operas churned out across the world in the wake of the first Star Wars trilogy that concentrated on the escapades of a group of adventurers in various sci-fi locales before they regrouped for the final battle against the movie's central protagonist, a formulae seen in the likes of Space Raiders, Star Crash and Ice Pirates, and a bit more carefree than the typical 3-act structure usually seen in sci-fi and action movies of the time.  The Force Awakens attempted to channel that same kind of narrative structure, best seen in the hentai monster sequence that doesn't actually serve much storytelling purpose beyond distracting you from the lazy coincidences used to weld Han Solo and Chewbacca into a story in which they don't really have any place, but Rogue One excels at recreating this kind of cheap-ass, anything-goes adventure - it's just really hard to see it because the film is so damned well-made and everything is filtered through the post-millenial grimdark lens of uber-seriousness to the point that not even the clumsy slapstick and catty wisecracks of a comedy robot breaks through - seriously, it is a film that has a wisecracking comedy robot front and center and yet the big takeaway from it is likely how grim and portentous it all is.
After the The Force Awakens' cherry-picking of elements limited to the original trilogy of movies and - given the anti-Prequel /anti-Lucas slant of some marketing and subsequent de-canonising of decades' worth of spin-off media - calculated effort to convince a generation that this film and this alone continued the adventures of their heroes, the Star Wars universe (by design) felt a lot smaller and more empty than it ever had, but Rogue One reverses that.  It adds Easter egg after Easter egg, from cameos of Original Trilogy stalwarts and backing characters to the cast of tv's Rebels without discriminating against the non-movie sections of the canon - this universe feels lived-in again for the first time in a long while, and I am thankful to Rogue One for that, even if I suspect I'll never rewatch it half as many times as I have other Star Warses.
...and so to The Last Jedi trailer, which dropped today.

I am genuinely struggling with how underwhelmed I am, although that could just be my general disappointment with The Force Awakens coupled with an inescapable feeling that much as I thought these new characters were okay in one movie, they've already had their chance to tell their story and now it's done.  I mean, Rey's character arc so focused on "the Call To Adventure" - the first step of the Hero's Journey (AKA "Screenwriting For Dummies: Chapter 1") - to the point that it became the entirety of her arc and when she accepted that call she completed her journey as a character.  I'd prefer to move on from Rey, but obviously Star Wars producers - as we learned with Rogue One - are cautious when it comes to spending 300 million dollars, so I guess we're getting a "white people learn them some mystic arts" movie now, which I guess is as good a mid-80s genre to plunder as the sci-fi romp is.  Even so, I think my hopes are more pinned on the next Star Wars Anthology movie than the latest entry in the increasingly tired Skywalker Dynasty.
Posted by Brigonos at 4/14/2017 09:11:00 pm