I just said literally when I meant figuratively, like a crazy person 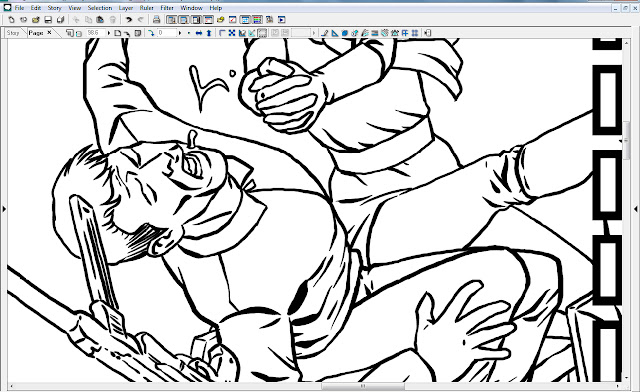 The culture wheel has turned since Runaways first appeared in comics form in 2002 wielding its open disdain for its own genre like an obnoxious teenager devoid of self-awareness in a bit of meta-commentary from creator Bryan K Vaughan that was sadly lost on the title's vocal online fanbase who - despite reading a superhero comic set in a superhero universe about people with superhero names and superpowers who fought supervillains - would regularly insist that "Runaways is not a superhero comic" even when the writer expressly wrote Spider-Man and Wolverine into the stories.  Runaways is a superhero comic, but part of its gag was that the characters didn't consider themselves superheroes despite doing all the things superheroes did, like fighting supervillains and vampires, traveling in time, battling shape-changing aliens, etc, and you would have to take an incredibly shallow surface reading of the material to not see any of this...
Anyway, the second season of Marvel's Runaways is not very good, which is my polite way of saying it is bad.
A below-average teen show with the word "Marvel's" bolted onto it, it's roughly 95% people talking or shouting at each other and then the other 5% is something happening in CGI or slow motion.  The straightforward originating premise of kids discovering their parents are supervillains so they Run Away from home has been convoluted with unnecessary backstories for characters who worked best as archetypes, an approach that just serves to reinforce that there are no new ideas in play*, and somehow, despite the sometimes-laughable lengths that the makers have gone to in order to divorce the show from anything vaguely superhero-y, the characters often just look outright ridiculous in a way they wouldn't if they were dressed in modern superhero outfits.
The superhero genre has been  rehabilitated since the Runaways comics first landed, and not only have all the things that made it unique since become standard, but we've had 7 years of a tv show about Green Arrow, which has spun off four years of the Flash, three years of Legends of Tomorrow, and will shortly be joined by a Batwoman series that will be showing alongside the third season of Supergirl, while in cinemas, Marvel have to date made 22 films and roughly 30 billion dollars, and spun off Agents of Shield, Daredevil, Jessica Jones, The Punisher, Iron Fist, Luke Cage, and Agent Carter tv shows.  This would, by any objective evaluation, be the absolute worst time to base a tv show on the idea that superheroes as a concept are stupid and lame - and yet here Runaways comes anyway, peddling its shame at its own genre like Smallville was still a thing.
And what's with the synthwave OST?

It's a genre utilised in evoking the 1980s, but how does that relate to a television show about the post-millennial generation?  I could postulate about how it might be a means to reference the decade that spawned the media which provided the inspiration for the original comics, or suggest that it's a means to channel the post-internet world where all media is available to be consumed at all times and thus genres become meaningless and children pine for the artifacts of cultures that lived and died before they were born but really, I think we all know that's a stretch and it's far more likely it's just a stylistic choice that has no meaning beyond its current and likely fleeting appeal, which is as goo a paradigm for this show as any.  I am implying that Runaways is bad television.
Let's face it, though: if it was good I wouldn't be watching it because I apparently only like dreadful tv. 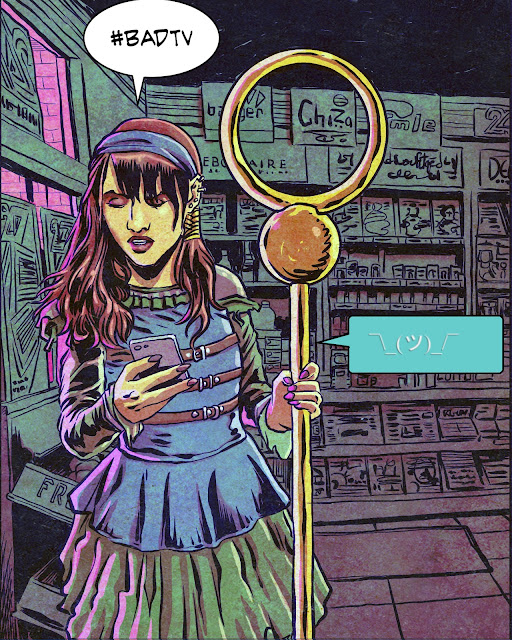 It does, however, meet the high standards demanded of 13 year old television viewers - by which I mean characters occasionally say the word "hashtag" and the nerd character says something related to Star Wars - but I admire the show's commitment to the rejection of binaries both in its diverse casting, and in its firmly and oft-affirmed belief that the show doesn't have to suck or blow and can, in fact, do both at once.


* Worse still, existing characters from the comics are expanded upon to become what can only be described as racist stereotypes, with the most obvious example being all the black characters having links to gang culture and crime, or the only Asian characters facing off in a martial arts battle, or the only Latino character defeating an opponent by speaking Spanish - and no, I am not making that up.
Posted by Brigonos at 5/22/2019 01:40:00 am