I don't kiss, honey, but for another fifty you can spank me 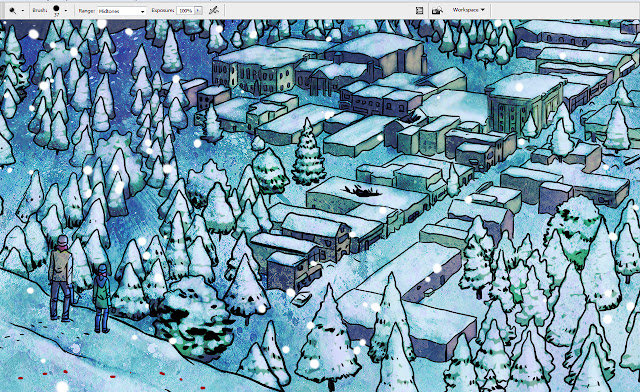 As someone who grew up in a Spurs household, I naturally despise football and all it stands for, so I was delighted to have dedicated a portion of the paltry span of increasingly-cursed days I have left upon this venom-drenched hell-sphere to playing a footy vidyagame for "research", so here I am like a total chump playing FIFA 17, an experience which is slightly - but not predominantly - an affirmation that I wasn't entirely wrong to keep away from sporting games. 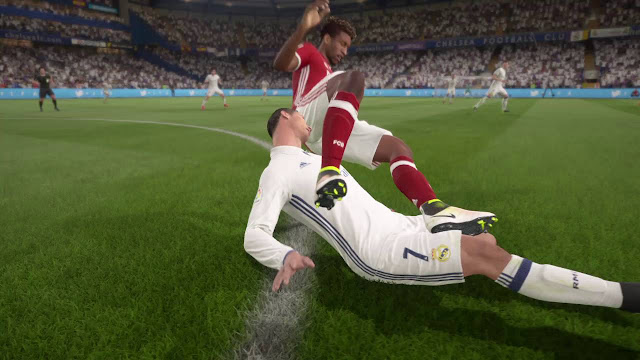 Let me briefly sidetrack - don't worry, I'm going somewhere with it - to explain how "trophies" work on a Playstation: within modern games, there are token rewards granted to the player for reaching milestones in the game like driving a total of 5000 miles or shooting 100 enemies with a particular gun or collecting 20 of a particular kind of gem or coin - that kind of thing.  These token rewards are called Trophies on the Playstation family of consoles (and "achievements" on the Xbox series of machines) and they have no actual value, being virtual tokens or medals that grant nothing but bragging rights to prove you've done something in a game (the trophies are displayed on your gaming profile/account and so can be seen by anyone online).  On the list of trophies for each game, right next to each trophy is a little number giving you the percentage of how many of the game's players across the entire globe have won that trophy, and the three rarest trophies in FIFA 17, obtained by less than one percent of the estimated 24 million FIFA 17 players* on the entire planet are gained by "playing a match as a woman's team", "finishing a match as a woman's team", and "playing a tournament as a woman's team", so even before your old buddy Mr B started to play this game, he was getting some serious confirmation bias vibes about the sensibilities of its target audience. 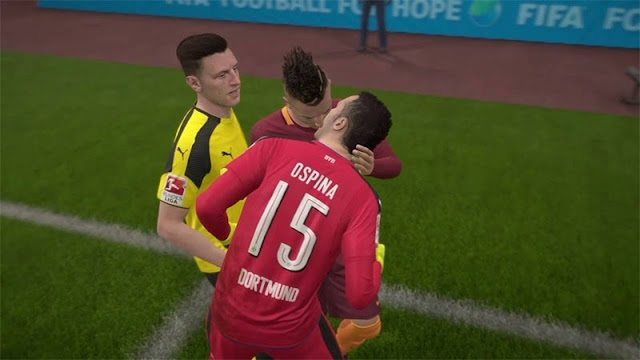 I find this virtual world sexism germane because what interested me about this game is the inclusion of a secondary play mode called "Journey",  which is a story-driven add-on which presents a recreation of the world of a professional footballer in which women are notable only by their absence.  The idea of a story you played through in a game whose only play mechanics are a replication of a sport was intriguing to me, as... well, what exactly is this story going to be about?**  Using your football skills to fight terrorists?  A detective story in which you uncover corruption in monolithic sporting organisations?  Or will it be you playing as a young lad who wants to do football in Wembley Stadium so has to play loads of football games and training minigames and then does football in Wembley?
Go on, have a guess which it turned out to be. 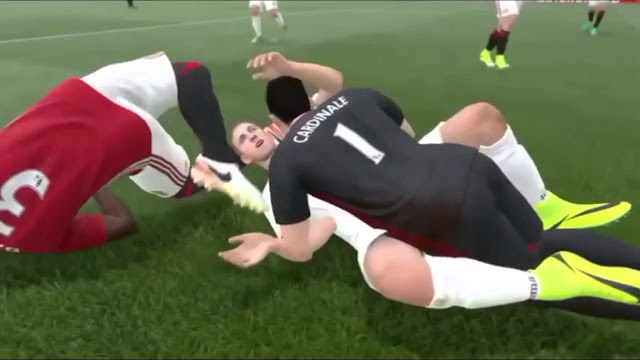 Journey is basically a moron-proof ultra-lite RPG made by someone who played Mass Effect and thought "you know what, this is a bit complicated", and being part of an officially-licensed product with a mandate not to portray the organisation or sport in a bad light, it has little in the way of dramatic bite or gritty realism - for instance there's no struggling with drugs or navigating your character through a Phoenix Wright Ace Attorney-style minigame in a courtroom fending off allegations of sexually assaulting a minor - and instead we get an indulgent football legacy storyline with your fictional character chasing fame while trying to stay true to his fam.  It's very much invested in the romantic notion of football as every young lad's fantasy career and a route for them out of poverty, not that the game goes much into the depiction of poverty.  You accrue followers on social media the better you do in matches, but a nice touch is that you get far more followers if you act like a complete and utter prick, which was of course exactly how I was playing the role, going so far as to choose to play for Chelsea.  At some point I realised, though, that not all footballers are pricks and I was in fact confusing them with Formula 1 drivers, so I started playing the character a little more level-headed to stop the manager riding my ass and keeping me on the benches because I'm acting like a boor - presumably this is a game feature because FIFA is very concerned about the conduct of those of its members in the public eye and want to make sure the game's image is always presented as beyond reproach and spotless and I don't follow football so you'll have to insert your own joke here about whatever a Sepp Blatter is - and for the trouble of winding my neck in got banished to Newcastle.
I mean, I got a choice of clubs to transfer to, but I'd actually heard of Newcastle - the city - and I remain unconvinced that "Norwich" is a real thing.  Anyway 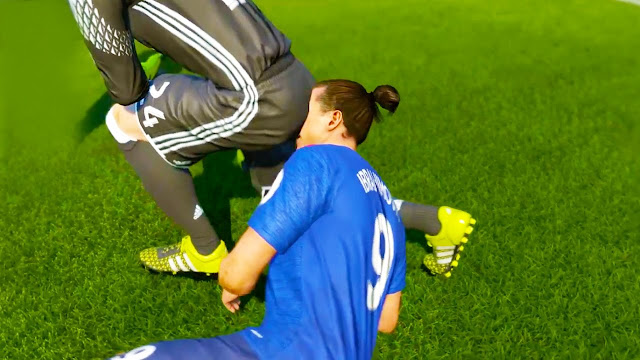 I like how you can change the game camera to something closer to the pitch/players so you can actually line up a tackle (though mostly I just try to hack the legs off opposing players***), and it gets pretty exciting when the camera closes in like it's chasing you when you make a run for the goal, though finding the actual ball on the pitch seems to be an arbitrary experience.  I have some vague recollection of playing soccer games Back In The Day and am used to the whole player-switching thing where you always control the player on your team in possession of the ball, so I was pleasantly surprised to see there's an option to play the entire match as a single player, and while this was good fun and reminiscent of having a kickabout with your mates, rather a lot of it seemed to be a man on the side of the pitch waving a flag at me because I had broken football law. 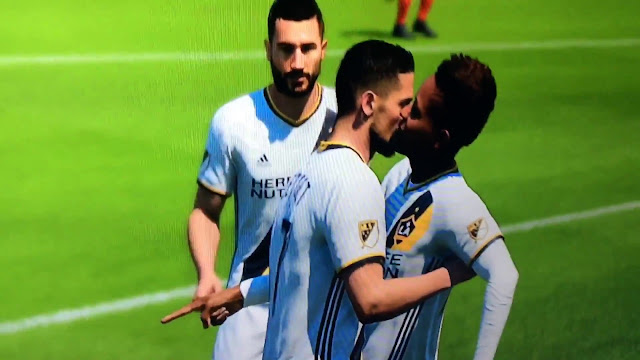 I'd like it if there was an option to better highlight the ball and your current player more prominently as the current visual cues are pretty weedy and lead to constant confusion as to who I'm currently controlling or where the ball is, but I suppose after two decades of making these things, Electronic Arts know the wants of their audience a bit better than I do. 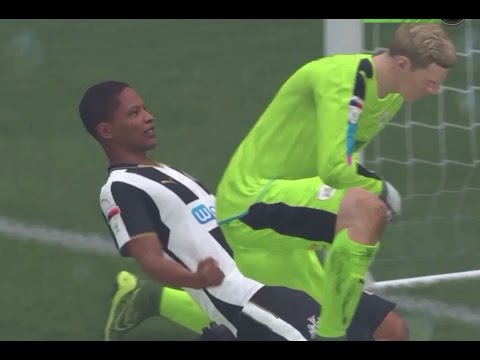 I have been playing this a lot, so as research projects go it's been pretty enjoyable even with the nagging to sign up for an online account so that EA can nag you into micro-transactions, but I think I can get along just fine without either, thanks. 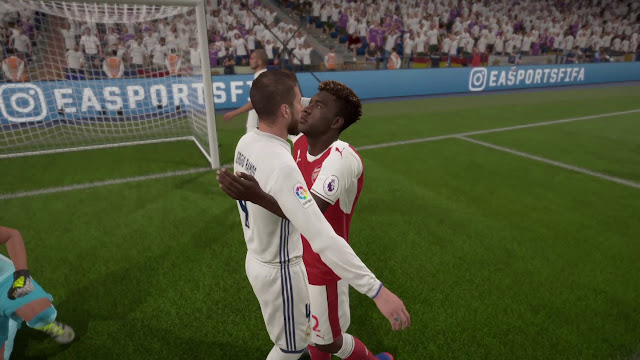 * FYI, I - like a fair few other people I imagine - bought this game second hand for the princely sum of one UK pound, so I imagine the actual number of players when you include second hand sales and borrowed copies is far higher than the number of units sold would suggest.

** The fact that there is not an Escape To Victory videogame is a crime.

*** SURPRISINGLY DIFFICULT to foul other players, at least in the story mode.  I played a woman's match and those bitches are vicious because I got red-carded within five minutes.
Posted by Brigonos at 7/12/2019 03:11:00 pm