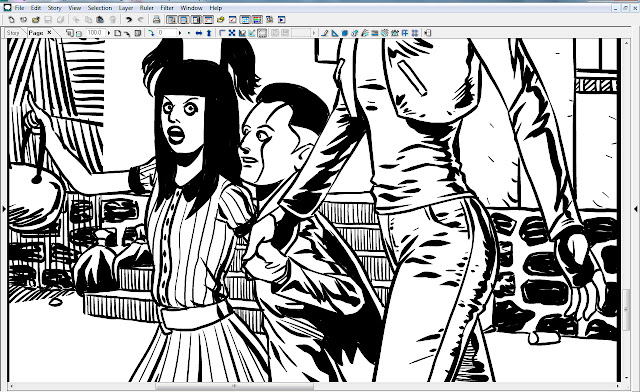 A rather rude journalist once asked Gabriel Byrne why he stars in so many terrible projects, and Byrne responded "no-one tries to make a bad movie", and if he was saying that he does his best that is fair enough but... man does he ever star in some absolute shite.
Why yes, I did watch the French War of the Worlds television miniseries, why do you ask?

I powered through this in two days because there's only 8 episodes and I knew I wouldn't come back to it if I didn't see it all in one go because it is painfully apparent very early in the show that this is not very good.  What it most reminds me of is those BBC efforts in the 1990s and 2000s to dip a toe in the waters of popular genres from elsewhere in the tv world, particularly those daffy attempts to outdo the Americans in recycling dated sci-fi ideas and getting mixed results like that toss Invasion thing with Fred Ward, or that banal Survivors remake (although I did enjoy the second series a bit more).
So what's wrong with this adaptation of HG Wells' War Of The Worlds, then?  Well for a start it doesn't seem to have very much to do with HG Wells' War Of The Worlds, though these days that doesn't seem to be a particularly big problem with adaptations, and some of the changes like the "Martians" not being from Mars and not being tripods aren't necessarily deal breakers, but when there's no large-scale destruction and just extras laying around the street, you're arguably putting enough distance between you and the source material that you'd best have some ideas beyond cruising on the tired old "human nature under crisis is ugly" grimdark nonsense that stuffs pretty much every sci-fi show now.
Anyway, this wasn't very good, but it was nice to get back to something other than horror after the dreadful washout that was spooktober, and say what I might about this show, but getting back to watching rubbish sci-fi is a nice way to cleanse the old media palette.
Posted by Brigonos at 11/08/2019 11:58:00 pm

Labels: 2 broke girls pornographic fan fiction, sock fetish, sweet ass, twinks doing it in the back of a car