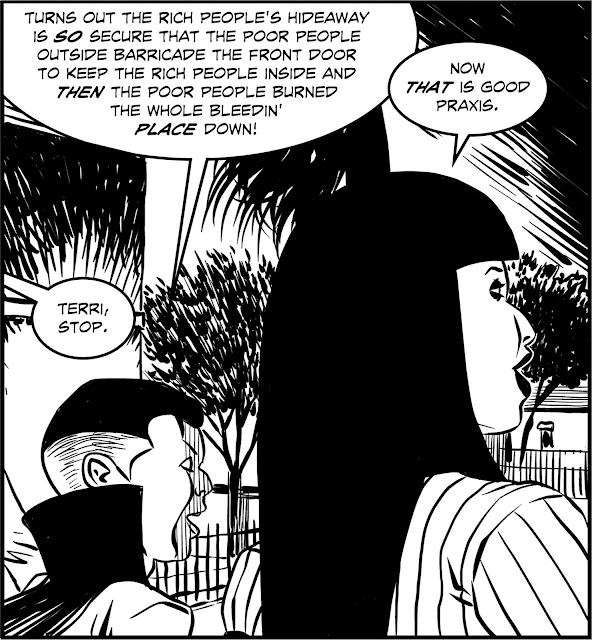 This will come as something of a surprise to the (checks view counter) three people who read this unpopular and despised blog, but I tend to watch an awful lot of really bad television and films.
I don't mean "bad" in relation to their objective quality or production values, though a lot of them certainly aren't good when evaluated in those terms, I mean in their philosophies and in what they contribute to culture, and what they say about us as people.  Years ago, I stopped watching US medical shows for reasons I didn't fully understand as I hadn't explored my own political views in any meaningful way, though I assumed I was some kind of limp-wristed liberal because I liked Star Trek, but it's only recently as I've slipped to the dark side - the left - that I've come to understand that my objection to American medical dramas stem from an understanding of one of the fundamental principles of anarchist political theory: that all cops are bastards.
I will assume you are not aware of the underpinning philosophy and explain: not all cops are actually  bastards by dint of incomplete lineage or in the vernacular sense of being a troubled individual with histories of questionable morals and/or actions, but all cops, in being cops, are representatives of an oppressive mechanism of control that acts in the interests of capital rather than the interests of the populace, and are - through collective guilt - to blame for its failings which at worst manifest in the widely-publicised actions of "bastards", thus all cops, in their active support of this system and its bastards, are bastards themselves, hence "ALL cops are bastards."
I realised that I had stopped watching medical dramas made in the US because all American doctors are also bastards.  Interestingly, this is not purely because they support one of the worst healthcare systems in the world that is essentially a glorified kidnapping racket in which paramedics roam the streets abducting the vulnerable and pressganging them into a life of debt slavery, though obviously a good person would never condone this atrocious state of affairs let alone actively participate in it, no, I mean they are bastards because they act like it.
I don't think that real-life American doctors are as big a bunch of assholes as the doctors on tv, but to be fair, I am pretty much certain that this is not possible as it takes literally dozens of overpaid writers months of creative back and forth to make doctors in American medical dramas as utterly unlikable as they are, and some schlub just out of medical school hasn't got the time or energy to replicate that kind of effort on top of managing their work-life balance while staring down the barrel of their own lifetime of debt.  Anyway, the doctors on US tv are assholes obsessed with money, so that's why I stopped watching medical dramas, but there is also a case to be made that since they support and materially benefit from a system which preys on the poor, they are not just assholes personally, but collectively.
Ugh I am pretty sure I started out this post trying to figure out if I should stop watching American cop shows because they're just propaganda - is "copaganda" a word?  It should be - for a corrupt imperialist nation of warmongering capitalist psychopaths but this is the kind of thing that distracts me now, and I just made you read about it.  So who is the real asshole?  Impossible to say.
Posted by Brigonos at 11/15/2019 11:28:00 pm

Labels: All Cops Are Bastards, American Doctors Are Assholes, copaganda, death to the west, hail Satan