I am going to teach these girls to kill and gut a pig tonight, Danny 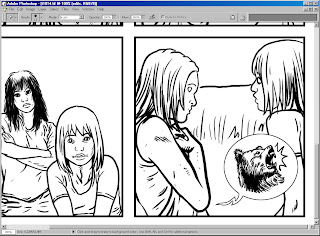 Been watching:
Our Friends In The North.  Like most BBC fare it is a show not afraid of the loving embrace of cliche, but has the odd good performance and an early glimpse of future Bond Danny Craig.  I gather this was a big deal at the time, though I'm not sure why.
Weeds seasons 6-7.  Maybe I am remembering wrongly because it has been a while since I saw this show, but characters didn't seem to act quite so arbitrarily before, though Nancy's eldest son remains reliably and deeply unlikeable - mainly I think because he does that thing where he calls one or more of his parents by their first name, which I cite as being up there with hating dogs as a sure sign of a rum 'un.  A lady friend points to matriarch Nancy as being the major troubling presence because of her quote wonky mouth that makes her drink stuff all the time to disguise it unquote, but I put that down to women occasionally not liking each other for reasons I am not allowed to fathom because penis that's why.
Space 1999.  I occasionally come back to watching episodes of this stored on my PS3 and it is a daffy load of old balls and no mistake.  Often nonsensical even by its own random logic, it's saved by great FX, a stonking theme tune, and a surplus of ideas which later sci-fi shows like Star Trek: the Next Generation would come to owe a great deal.
Posted by Brigonos at 2/19/2013 12:54:00 am