Please do not turn me marrying my daughter into something ugly 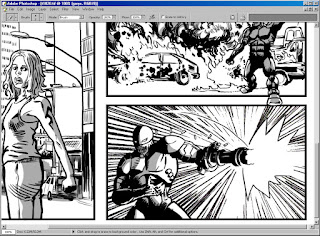 Been watching:
Lord of the Elves, which is an awful title to see onscreen - or even on the bluray box - as it looks fleetingly like Lord of the Flies, which misleads you as to what genre/specific film this might be ripping off (as most Asylum films tend to do).  The story is pure SyFy Channel cheese and it's basically Caravan Of Courage without the Ewoks, though there's a bit where Christopher Judge - still defiantly and unironically making a career playing the black dude with a spear in any old bit of tat going even if it means being the only black guy in a tribe of prehistoric Indonesians and no they do not explain what that is about - turns to face the camera and stands his ground, wielding his spear like it's going to fire lasers from the end and the music swells like David Arnold wrote it... it's an oddly charming touch for an Asylum movie, as they're usually typified by their nastiness and leanings towards shock schlock, while the setting is gorgeous, even if the film shot in a way that they somehow manage to film a panning bird's eye view of the characters running past what are clearly the only tire tracks for miles around.  The tribal chief is also really awful, though I think he's actually supposed to be - it's a strange performance and no mistake, someone would definately have noticed and said something if it wasn't deliberate.
Cheapo cheese that's not exceptional in any way, but passes the time if you don't mind it being slightly nastier than a saturday matinee romp needs to be, which the makers kind of acknowledge with really glaring cuts to some of the gore and the thing still comes in rated 12.
No-one is a lord and there are no elves, though.  Not sure what title's about.