The king of Thailand just died. There's like an uprising or something. 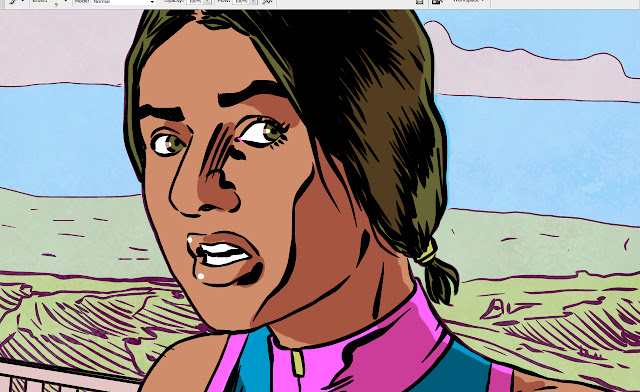 New Year's resolutions off to a great start in 2019 as I am already failing that whole "don't find any work as a comic artist" one as I clean forgot that I am still drawing Velicity Jones for David Lloyd's ACES WEEKLY, which is currently publishing the second adventure of the titular Jones.
I can only take some small solace that I am at least managing to fail at failing, andshould you be interested in ACES WEEKLY, you can find a means of electronic subscription HERE if you are of a mind to subscribe, and I do hope you will as I would really like to continue eating this year and this may be my only income after... (checks Brexitpocalypse date) March 29th.  HAHA they're doing it just in time for April 1st - what a spiffing wheeze the political classes are pulling on us!  No doubt the laughter they have gifted us will distract from our rumbling bellies and growing resolve to chop their flipping heads off and stick them on blinking spikes where we can spit on their rotting crow-pecked flesh.
Ahaha.  Clearly, I've never really understood this idea that violence has no place in politics, because that strikes me as a utopian notion and the last few years have made it clear we do not live in a culture with utopian aspirations and which still utilises violence and force as an intrinsic part of political process, be it the old-fashioned clubbing of protestors, or the information warfare of smearing anti-establishment voices as antisemitic.  Cards on table here, I myself am a Northern Irish Catholic Republican Socialist whose voting options include convicted terrorists who secured their place in government through a decades-long murder campaign, so my arguing that violence does not yield results would be a hollow claim even before I got to the fact that the state's monopolistic use of violence to resolve political stalemate is the cornerstone of human civilisation.  Central to its ongoing justification is the myth of "stability" through orthodoxy, and (blog post groans loudly as it turns back on course) Velicity Jones is just such an agent of orthodoxy.
A guardian of bourgeois British entitlement who kills people and then leaves their body in a field so it looks like a suicide and then trolls leftists online okay maybe not exactly that but whatever the 1960s equivalent of that kind of behavior was because that's my head canon for her life as a spy, only Lee doesn't go for it, the coward - oh yes, Lee Robson does the writing, in the moments he can tear himself away from lamenting Morrisey's fall from grace (or as Morrisey fans like to call it "after 1982").  Lee prefers to think of this as a spy romp in the style of the original Modesty Blaise strips with a healthy dose of the eurocomic school of ligne claire and a dollop of the Roger Moore era of Bond movies when spy romps were allowed to be colourful and fun and weren't just the adventures of a globe-trotting misogynist.
Unusually for collaborations with Lee, I didn't get notes on the size of the main character's rack on this one, so that must mean we're feminist comrades now.  Well, maybe not, but I think I'll stop listening to Jordan Peterson vox pops just in case.  Boy that guy sure does love his beef.

So uhhhhhh go buy my comic I guess?  It would be greatly appreciated by myself and Lee, but also by the many other fine contributors to ACES WEEKLY who also get a cut of that sweet sweet money pie.
Posted by Brigonos at 1/09/2019 04:01:00 pm