"I don't have the time to stand around waiting for you to finish the spot inks - I'm a busy man!" 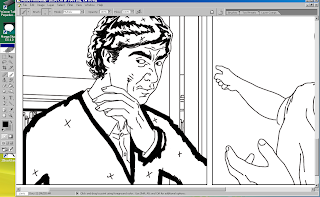 reading: I Kill Giants, a mainstream manga effort from Joe Kelly and Ken Niimura about Barbara Thorson, a little girl who claims to kill giants of an indeterminate nature and has a fixation on the Dungeons & Dragons rulebook. To go into too much detail would spoil a straightforward tale whose twists aren't hard to see coming but which nonetheless hit all the right beats just when they need to, particularly near the end when a character is called out of school in a moment that brought back personal memories for myself.
I get the impression that the creators are angling for a movie deal with this one given the three-act structure of it, but it's a fun tale that commendably appropriates manga stylistic tropes and shows that medium to be just another form of comic book easily capable of complexity, subtlety and pacing no matter what the penny-pinchers promoting their backwards books would like us to believe otherwise every time they churn out yet another cheap collection that barely qualifies as toilet paper but which they inexplicably claim is an authentic representation of an art form featuring a teenager in an orange boiler suit punching people in the balls for seven hundred pages.
I Kill Giants is manga done well - by which I mean it is a great example of a comic book and well worth anyone's time.
Posted by Brigonos at 6/24/2010 04:27:00 pm