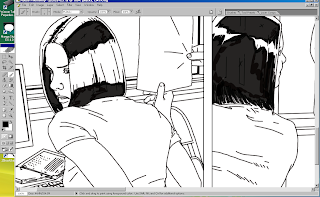 I got up reasonably early today, even with a hangover, and got some scribbles done. Then I spent four hours in front of Fallout 3 because that thing is a fucking time sink. I've also been watching Magnum PI for the first time in, yep, it's been decades, and I could swear Tom Selleck was more affable but in the first season he has a punchable face and his car isn't as awesome as I recall. There's also an episode where Magnum has to outwit a master of kung fu and yet the most action-packed sequence is a bit where he's running about trying to stop a lass getting dehydrated because she's been on the beach a bit too long. I should just type 'fail' in all caps and leave it there, but explaining that I could do that will fill a bit more space so it looks like I've put some effort into writing a blog entry today.
Posted by Brigonos at 6/04/2010 05:28:00 pm