Consumers respond to requests for their impressions of Windows 7... 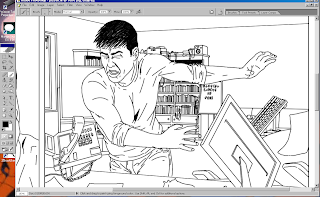 Watching: Secret Life of the American Teenager - in theory, a tv show aimed at teens that talks frankly about their sex lives and passes no judgment is a great idea, in that general consensus is broadly that they absorb this kind of shit anyway so it may as well give something back while they lap it up indiscriminately between mouthfuls of Pot Noodle and Red Bull or whatever the fuck it is they eat to get that pimply, sandblasted complexion that offsets the white of their shellsuits in such charming fashion. As you may have guessed from subtle clues in my use of language, I am not in favor of teenagers as a collective body, though there's plenty of dramatic mileage in fiction that centers around any group trapped between two distinct stages of their lives, and by and large that means either middle-aged people or teenagers, with the 20-30-somethings presumably being an uninteresting bunch. Anyway, there's a lot of teen programming about, and Secret Life is now three years old and just as staggeringly sanctimonious as it was on day one, when absolutely no-one needed to be told that the producers were vaguely aware of the equally dull Juno and set out to make something just as boring and trite on a weekly basis.
Secret Life is awful, and that's why I watch it. Some right-wingers decided to make tv that told it like it is, and then went about telling it like they saw it, showing sexual activity as deviant behavior rather than an indulgence of those with opportunity and the inclination - sex is either explained by the actions of abuse victims, "your ethnic types", low income families, or catholics (though the latter three are usually three birds with one stone on American television), but it's all so thick-headed and impossible to take seriously that I enjoy it the same way I do sci-fi, because it's practically another planet these - and I use this term lightly - people inhabit, and it can be no coincidence that just as I would never have watched the likes of it years ago, I wouldn't have watched the Ferengi episodes of Deep Space 9 either, but now I breathe this crap in like oxygen.