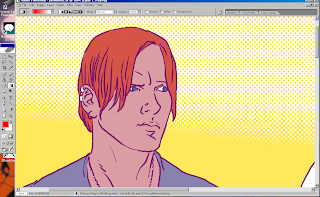 Caught The Losers tonight (it was supposed to be Predators, but plans change), and it was pretty lame. The comic book original should have been a template for a big, dumb action movie with just enough toe-dipping into realworld politik and techno-fetishism of the latest war hardware to get the alpha male in you whoopin' and a-hollerin' for carnage, but the movie felt really, really small in scale, which is a problem for something that has a hijacked military helicopter making off with an armored truck plucked from the middle of a gunfight in downtown Miami while under fire from an anti-aircraft gun - this should feel epic, but instead just feels like a lesser rehash of much grander things, among them the source comic book, Bond villains, and the A-Team. It never gets beyond the level of visuals of a decent-scale tv show like 24 or Fringe (it even borrows the latter's clunky captions built into the backgrounds of establishing shots), and the direction is no more than functional, which means that it looks like a music video more than it does an action movie, lacking the flair for the visual language of the more successful boom-boom flicks of the 1990s in favor of slo-mo and never realising that the thing about action movies is that they're exactly what they say on the tin - they're supposed to pivot on action and not just movement. The problem is the action tv series died off in the 1990s so everything could become some version of the X-Files hinging less on physical conflict and more on interpersonal drama: up until then, action directors cut their teeth on tv and learned their trade on the A-Team, Knight Rider, Viper, the Fall Guy, but once this kind of television became obsolete there was nowhere to learn to direct action sequences except music videos, and the big name action directors of today indeed learned to capture perfect abs in slo-mo but never how to make a thrown punch look exciting, hence the visual whitenoise of the Transformers and Jason Bourne series. In fairness, the action series seems to be making some sort of comeback of late with Human Target, Philanthropist, Trauma, etc, but anyway...
The characters in the Losers comic were pretty broadly drawn and as a consequence quite easy to tell apart, but here they're interchangeable and uninteresting, with Aisha especially reduced from a far more imposing and menacing presence to an unconvincing daddy-issue femme defined by her relationship with anemic male characters. She's a blandstrosity when she should be a monstrosity, and the preening Max - upon whom the film's quest for vengeance arguably rests - is about as menacing as a blind kitten.

It goes nowhere, does nothing new, isn't particularly enticing as a re-watch, and for much of it you cannot escape the feeling it wants to be taken more seriously than it deserves, but to be honest, any movie that can take a book that has dudes fistfighting in the cargo bay of a fleeing aircraft and then falling onto moving muscle cars giving chase and can't make an action scene out of that? That movie deserves to fail, and at least on that front, Losers delivers.
I did not like it.
Posted by Brigonos at 7/10/2010 06:57:00 pm