"If there is to be any salvation... those of us who know our guilt must admit it." 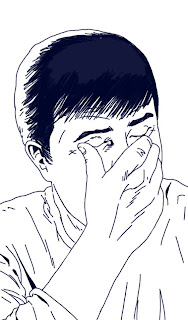 A random panel from the day's work so Lee Robson can use it out of context to suggest some value judgment made on his script. I laugh at your Northern self-loathing, Robson. I laugh at it and your secret desire to be middle class and write plays about middle-aged housewives finding themselves.

Watching: Predators. I don't really know about all this "It's a sequel to the first one and sort of a sequel to the second one or bits of the second one that back up this story but we're ignoring the other two sequels and this is a continuation of the first one" reasoning that's being employed by the makers, but it doesn't sound like a good idea as it didn't stop Superman Returns being a big gay load of shitty ass just because it ignored the more dopey entries in the canon and they should just accept that someone made those and they weren't good and then move on. I have no problem with the existence of Alien 3, Resurrection, AVP and Requiem because no-one's forcing me to watch them more than once, and to be honest, there's no need for the hoop-jumping to distance Predators from poorer relations because it stands alone quite well even from the first, opening as it does with a conundrum not unlike that facing the cast of Cube or one of the many and dreadful Riverworld adaptations, in that a disparate group are stranded somewhere with no knowledge of how they got there or even where 'there' is, and must rally to adapt to unknown dangers. It's played for the first half hour like the audience haven't seen any promo material showing the locale to be an alien world, but a bit like when I watch Planet of the Apes, I do wonder why the characters don't look up and notice the stars and get an inkling - there's a bloomin' huge planet overhead that someone must have noticed even before they got out of the trees, but like Charlton Heston's 'astronaut' not noticing a little clue like THE FUCKING MOON when pondering where he might be, it's not a deal-breaker for me that the cannon fodder of Predators don't notice a couple of Jupiters knocking about between the treeleaves.
It's a fun movie I really enjoyed. The director could maybe have turned the lights on in a few action scenes, but otherwise it holds together well enough as popcorn accompaniment - though personally, I had a big bag of cheesy Wotsits that did the job too.