"I thought that some of the metaphysical imagery was particularly effective." 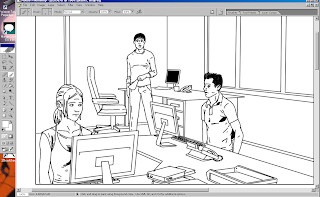 Looking at this panel, Lee would ideally be stuck to elicit some negative subtext on my part about his troubling quest to become Richard Curtis, but if he can tear himself away from writing Shirley Valentine fanfic or listening to his copy of the We Will Rock You cd personally signed by his hero Ben Elton long enough, he'll probably find it. 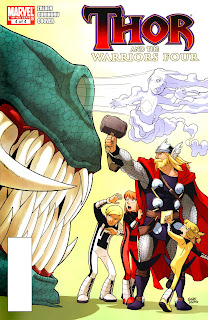 Alex Zalban wraps up his first major project for Marvel with the fourth issue of Thor and the Warriors Four, and all told he's done a good job with most of it, avoiding going too far into mawkishness or sentimentality to get across the stakes for the pre-teen cast as they pursue their quest to steal the youth-bestowing golden apples of Idun from the orchards of Asgard in order to help their terminally-aged grandmother dodge the coffin, but on the other hand no doubt leaving many a frustrated reader unhappy that the writer has chosen to spare the child protagonists the loss of a loved one at the finale, instead opting for the happy ending that he's advisedly chosen to avoid overselling when it comes. 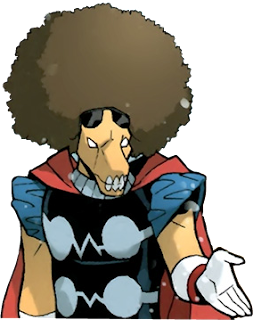 And make no mistake, there's more than likely a few grumping that this child's entertainment isn't terribly gritty or full of death and ninjas being stabbed in the face, since the aging Pack fan does occasionally seem to wander into this continuity-free series for their fix (after the regular Marvel universe Power Pack became pretty much unsellable when some genius came up with the bright idea of making kid superheroes adults - removing their only selling point - and then wondering why no-one's interested in buying the books anymore), and to those aging yet still somehow adolescent fanboys I snort a hearty "PSHAW!" and return to my entertainment, happy that any lingering vestige of the moron in me who secretly longed for the book to be about kids crying over a dead granny has been thwarted. 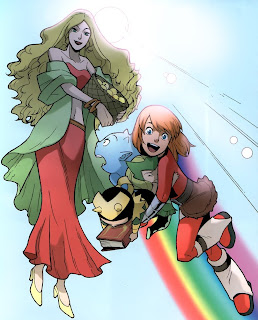 There are some great character moments between the beginning and ending of the quest like eldest girl Julie's lateral thinking and belief in the idea of family above superheroics, though the counterpoint of eldest kid Alex's musing that "stealing is wrong" ignores that the gods may be hoping people come along and steal their stuff (ie: fire) since through that act of engagement between mortal and deity is born their continuation in our culture through myth- or if that's too heavy for the little rugrat, he could try remembering that his first act as a superhero was to nick a doomsday weapon from Uncle Sam. No-one likes a hypocrite, kiddo, even if we do keep electing them.
His realisation near the end and subsequent heroic turn feel a bit of a let-down since he's the least interesting character and it feels like he's the focus more in that he's a blue-eyed blond male rather than - despite what Thor's hammer may think otherwise - because of any inherent worthiness on his part to be the central hero of the piece when it's essentially an ensemble thing and he's not contributed much on the journey for it to suddenly to be a Hero's Journey all about him - right up until then it hasn't been that, and when it becomes that kind of story at the last, it's a leftfield twist that makes it all slightly less of a tale than it had been. Less focused, certainly, and to an extent less epic as well.
Did I mention the book looks absolutely lovely in places?

The Guruhiru art studio does an absolutely bang-up job with some great storytelling that I wouldn't normally expect of a manga/anime-inspired style, which traditionally seems to focus more on producing static poses and character sketches than sequential artwork (a consequence of most manga artists using pre-rendered backgrounds), but here it combines with a clear animated style and energy that just makes me jealous the more I look at it.
At the back, there's also a Colleen Coover short where the kids meet another Marvel mythological refugee-turned-superhero in the Mighty Hercules as he explains the relationship between theology and science, which yields one of my favorite images in a book that's already packed with great panels: 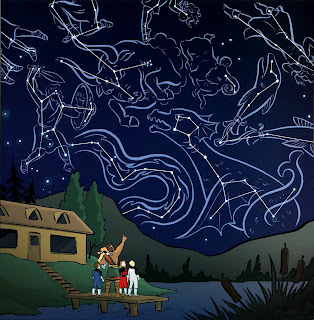