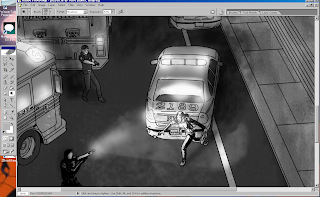 And that's a wrap on the second chapter of Babble as I've not got got a clue what's going on with the publishing company and the seventy or so completed pages are going in the electronic filing cabinet until we know what's happening with the rights, though if past form is anything to go by, the fact that you can squint and kind of lump the story in with the 'zombies that aren't zombies' genre (admittedly by way of the end of Quatermass and the Pit) and there's a ton of zombie movies that aren't zombie movies out at the minute, I imagine that the company that didn't think to release a graphic novel about Burke and Hare at the same time as a movie called Burke and Hare hit cinemas will get around to sorting out the rights issue just in time for 'zombies that aren't zombies but the story is kind of like the end of Quatermass and the Pit' plots to show up on Kim Possible or something. Do they even still make that? Damned if I know - Wiki that shit if you care.

So I'm buggered if I know what I'll do with my time now. There's one five-page story for Zarjaz that I'll get done while I have the opportunity, I guess, and then back to Saucy Mondays for a while to see if I can sucker in some Google hits, but if getting Google hits is anything like getting Deviantart pageviews, pretty much all I have to do is figure out a way to add tags like 'bondage', 'bare feet' and 'wet librarian' to posts. Although a picture which combined all three would presumably break the internet.
Posted by Brigonos at 7/22/2010 05:17:00 pm

Labels: at a loose end, Babble, GN, probably try some gateway drugs not that I miss the drink much BUT I REALLY DO, screen grabs