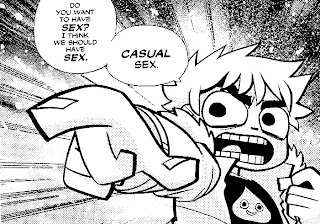 But Scott Pilgrim Volume 6: Scott Pilgrim's Finest Hour finally landed today and it's more of the same, really. There's not a whole bunch of this: 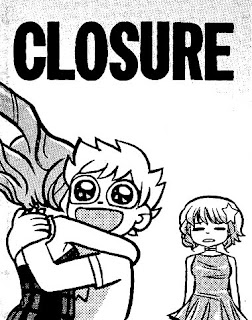 But it does end in slightly twee fashion, so there's that. If you're sick of Scott Pilgrim, I shouldn't bother checking it out just for a finale that will leave you scratching your head/incandescent with fury (delete as personal levels of pretentiousness allow). If you love Scott pilgrim - and plenty do - then it doesn't disappoint, with a good half the book dedicated to Scott's reluctant fight with the final evil ex and jokes that are pretty much just writer/artist Bryan Lee O'Malley pointing out that stuff like Zelda: A Link to the Past are things that existed IN YOUR TWENTYSOMETHING LIFETIME! and establishing that Scott's problem is that he should stop being so hung up on the good times of his youth and embrace the future - a message I can't decide upon as being either ballsy or lacking in self-awareness since it comes in the sixth volume of Scott Pilgrim. If you neither hate nor love Scott Pilgrim, then you should probably check it out, too, as I can promise you it contains no Michael F Cera, and that's a pretty good recommendation in my eyes as I've just watched Year One.
Posted by Brigonos at 7/20/2010 02:41:00 pm