I'm a hungry man who's made a few mistakes 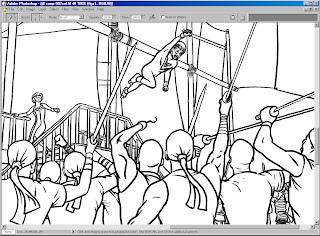 Been reading a bit more Marshall Law today - specifically the last three chapters of Fear And Loathing - and only just noticed that the big red design on his face is an inverted crucifix.  I'm slow, but I get there in the end.
My main takeaway from the material is that Pat Mills is most entertaining when he's furious at something in particular, and you can tell he's furious at superheroes and their dated endorsement of the myths of American frontier values by his singular focus on this to the exclusion of other American sacred cows - sure, there's some broadsides at Western machismo and US foreign policy towards foreign types making their own versions of US WMDs in there among the cape-bashing, but Mills steers clear of other big issues like race relations, gun control and poverty and zeroes in on his big bugbear of superpeople and their warped version of reality.  I can't remember the last time I read something where Mills' fury shone through in the material quite so brightly and wonder if it was deliberately meant at the time as a swipe at so many of British comics' writing talent pool jumping ship from UK comics and buggering off to America to take the superhero dollar, eventually influencing the US comics scene so much that it largely resembles what Pat was doing all those decades ago as satire on the genre's excesses.  Depressing to think it, but what he did as a warning seems to have been taken as a playbook in the intervening years.
Posted by Brigonos at 6/08/2013 02:36:00 am