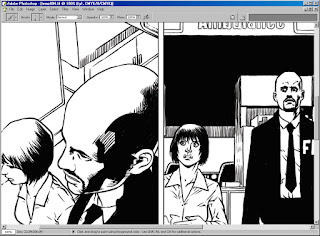 There's a campaign - run by dyke feminists, women in trousers and killjoy liberals, no doubt - to end the presence of Lads' mags on shelves, and as a man, I agree with the campaign because I'm tired of being objectified as a knuckle-dragging fuckwit led around every life decision by my cock.  I am a rational creature, and I don't need someone who failed to get a job in real journalism trying to tell me that Hollyoaks actresses in their underwear are the epitome of desire rather than everything that is wrong with Western society.
Also I hate Hollyoaks with a passion that borders on irrational.  If I could focus that passion into something constructive, I might have written a play or a novel by now, but as I have mentioned on the blog, the only thing I've ever written was that Batman story where the Joker ties Batman and Robin upside down in spacesuits after dosing them with laxatives in an attempt to make them drown themselves in their own diarrhea, but DC sent that back pretty quick.  They said there were too many ethnic and female characters in it, but apart from that it was apparently just what they were after for the Nu52 reboot.  As anyone who works with me will attest, I can't take any kind of constructive criticism or editing direction as I see this as capitulation and weakness, so rather than make minor changes and get a guaranteed payday, I tried rewriting it with original characters and submitting it to Image, only Erik Larsen said he'd already killed off several major characters in Savage Dragon in this exact manner twenty years ago - it's true what they say: there's no new ideas anymore.