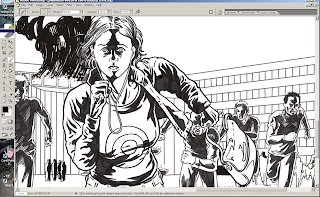 Bit of a slow day for telly, as I'm still catching up with my backlog of shows and trying to squeeze in the first season of ER, too. Alien Trespass is pretty duff despite starring Robert Patrick, who I normally like in stuff, and Merlin 'something something something' starring Baltar out of the BSG remake in the title role was unsurprisingly utter pish to the point I've forgotten the name of the actual film.
Reasonable amount of drawing done today, though, so that's something.
Posted by Brigonos at 9/28/2009 10:48:00 pm