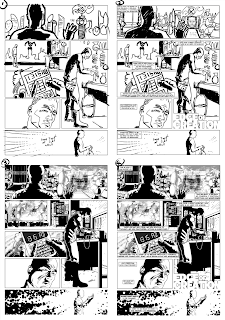 Searching my pc for the damned elusive files of previously completed pages of the GN, I came across the roughs for a FutureQuake strip I recently drew (and which appears in screen-grabs in some of the blog's earlier posts if you check them out), but which got bumped from the next issue for space reasons - no biggie to me, it means the FQ lads at least have a surplus of material. It shows the rough working process I'm trying to stick to at the moment:
1) a rough thumbnail of the page layout and any details I might need to remember come the scribbling stages (textures to sample, lighting effects to use, visuals to reference, etc). This went to the writer Dan Hill and he was happy enough with the layout, so I sent him a rough version of--
2) the lettered page (as I was doing the letters, too). Dan suggested some changes in caption placement and breaking down the bigger boxes across larger panels, so I went away and somewhere along the line came--
3) the finished art. There was a lot more to this part of the process, actually, as I scribble the page a couple of times, first as thumbnails, then as rough art. I wouldn't call it the 'pencil stage' as I don't have the room to pencil a full A3 page at home at the minute - space has always been a bother in that regard - and instead do the rough 'pencils' entirely on the PC. I'll maybe do another pass over that stage of the work, then a final version, wiping out the older versions once I'm done with them as any files over 30mb tend to make my PC agonisingly slow and prone to crashing - I probably should upgrade to something decent. Then--
4) I just bung a copy of the line art onto the separate file I did the letters on earlier. You can see the changes Dan suggested in this final version of the page, which is what went to FQ - sans credit box, which is dropped onto the pages by comics-producing machine Dave Evans, who does so much for the small press that I feel guilty if I don't personally letter anything I send his way so he doesn't have to waste time on it himself.

Strange but true - the rough layout and attendant note on the last panel is possibly the only example in recent memory of me doing a lower-case letter 'i' without doing the dot like a little circle and making myself look like a total girl.
Posted by Brigonos at 9/12/2009 11:45:00 pm