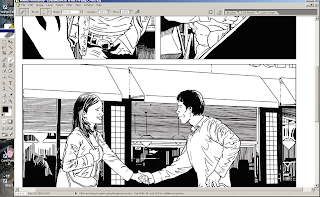 Still redrawing the sample pages of the GN, as they were the wrong resolution and dimensions - D'oh! Remarkable how crisp lines and a chance to fix some SHOCKINGLY POOR ANATOMY (that luckily didn't sink the submission) can keep me happy enough redrawing pages I thought I was done with.

Thoughts on rewatching Smallville season, 1 which I have on in the background to keep me amused while I scribble:

1) I'm struck by the generic 'menace of the week' format and lack of glaring story-arcs, but it seems to suit the format, not least because it doesn't make the show seem inaccessible and up its own ass like current seasons, which seem to start every installment with stuff exploding and people shouting even though most of this has little bearing on the actual plot of the episode that follows.
2) I was once asked by a younger family member of Clark/Lex "why are they friends?" and I had no answer then just as I have none now. For the most part it seems to be barely-sublimated attraction tinged with a bit of frisson created by neither character trusting the other, and this is slightly troubling because of how likable Michael Rosenbaum is in the role of Lex Luthor: despite later turning into a sneering panto queen before the character was killed-off Ernst Blofeld style in an exploding truck, you really get a vibe off the guy that he's trying to be a better man than his dad, and despite knowing metatextually how the Clark/Lex dynamic plays out in lore, there's no indication of Lex actually being evil within the confines of the Smallville show itself, he just seems to come from a bad home but is trying to be a good guy by fixing the damage his massive asshole of a father caused to a rural farming community. So when Pa Kent gives Lex the evil eye in early appearances, it's baffling to see that behavior from someone held up by the main cast as being a paragon of heartland American values, unless you're willing to stretch the homoerotic attraction subtext to read Pa's hostility as a dislike of what he sees as a growing attraction between his son and another man, but that would make Pa more than a little unlikeable, and he really doesn't need any more fuel for that fire, because one of the main things that struck me about early Smallville was that

3) Pa Kent is a self-righteous, sanctimonious prick. I don't just mean because he hates gays - though that doesn't help - but because he really is a stifling presence best summed up when he goes to one of Clark's football games after telling the boy that he didn't trust his son around other kids. Clark makes an effort to reach out to his dad by telling him that he's glad his father is there to see him play, only to be rebuffed with "I don't support your decision, I'm just here to see no-one gets hurt" in much the same way Dewey Cox's dad tells him that the wrong son died.
4) Clark isn't much of a hero. I don't mean because he doesn't have a costume or get into fights, but because he has to be guilted into acting by believing himself responsible for the deaths caused in the meteor storm that bore his starship to Earth from doomed Krypton. Before this, he's basically "fuck those armed robbers and that baby that's dying in a crackhouse fire - my dad wants me to hang at the farm" which is just bullshit. Superman can help people so he does: that's what makes him not only a hero in a long-running series of funnybooks, but in popular culture as the ideal American, acting out of good conscience rather than a guilty one, with nothing to gain and no guilty secrets to keep at bay with bravado and funny quips. In other words, the antithesis of that cocksucker Spider-Man, who I've never cared for and don't give a toss that the Devil showed up and gave a divorce in a comic one time that fans are still bitching about.